Mike Stidham’s changing, and thriving, with the times 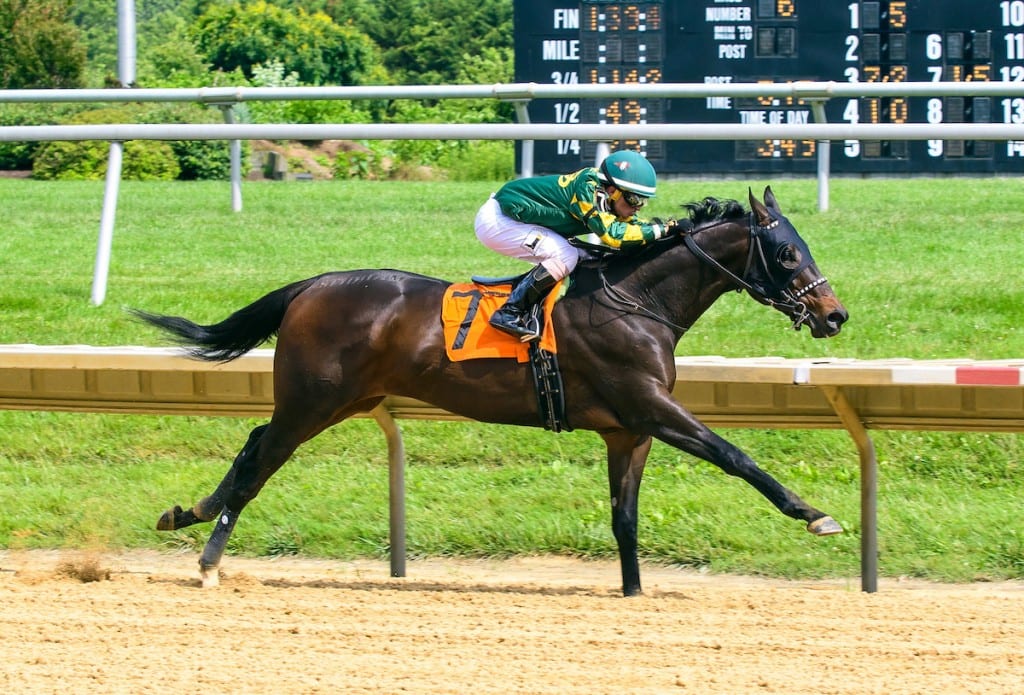 Belgian won his second start, on June 24. Photo by HoofprintsInc.com.

Running a racing stable numbering well over 100 horses in training is much like being the captain of a huge ship. Making a course correction in the direction your stable is heading is no small thing.

But just as a ship’s captain must look ahead for potential dangers and rough weather, a trainer needs to have the foresight to look to the future and make decisions before problems occur.

Trainer Michael Stidham directs a racing operation that stretches from Illinois to Delaware to Louisiana and back. As the boss of Stidham Racing, the veteran who has trained for more than 30 years has seen his stable grow over the years and in fact, 2016 was the best season the organization has had from a financial standpoint as Stidham runners earned over $3.7 million in purses, the sixth time in seven years his operation had topped the $3 million mark.

But racing continues to go through a lot of changes and course corrections of its own, and there are a number of states where the industry is in trouble. Foremost on that list is Illinois, where for a number of years politicians have in essence had a stranglehold on thoroughbred racing as the industry has attempted to open avenues of revenue from alternative gaming sources. While gaming revenue has bolstered purses in other nearby states, Illinois has had to soldier on without, and faced with declining purses, a number of horsemen have stopped racing at Arlington Park and Hawthorne. Once considered one of the top five or six race tracks in America with a plant that is probably the most fan-friendly in the business, Arlington Park, (where Stidham has raced since the late 1980s) and thoroughbred racing in general in Illinois are on life-support.

As one of Arlington’s top trainers for a number of years, Stidham has watched in dismay as the track has plummeted into despair, and finally the horseman made the decision to move east and begin racing at tracks in the East and Mid-Atlantic region. It wasn’t an easy decision to make, but as the trainer said recently, it was something that had to be done.

“I love Arlington Park, I’ve enjoyed a lot of success racing there, but I have an obligation to my owners as well as to my staff to do all I can to race in an area where the purses are competitive and the overall racing picture is healthy,” Stidham said after training hours this week. “We did some research, weighed our options, and decided to race here at Delaware Park this summer. We have between 50 and 60 head here and in addition one of our major owners, David Ross, who races under DARRS stable, owns a 38-stall barn at Fair Hill. I love the layout of Delaware Park’s backstretch. It was obviously designed with the horse in mind and is very horse-friendly, and while there is a need for some work to be done on the barns and the shedrows it’s still a good place to stable.”

“And,” he added, “if you don’t like having your horses at Fair Hill then I’d say you’re in the wrong business. Our barn is well ventilated, we have a small paddock where we can turn horses out, we have sand pits, and of course Bruce Jackson’s rehabilitation center is nearby and it has everything you could want for dealing with physical issues and rehabbing stock from hyperbaric chambers on down. Located where we are now, we have more opportunities for our better horses throughout the region, more stakes races for them to earn black type, and yet we’re in a quiet, horse-friendly environment for them to train so it’s working out well so far.”

All of that, Stidham said, contrasts with the situation in the Land of Lincoln.

“I’d say it (Illinois racing) is on the brink of extinction and that’s a damn shame,” the trainer said pointedly. “There isn’t a better place in the country to go to the races for the fan than Arlington Park and to think there’s a real chance it will close its doors is just tragic. We still have a division of the stable there with Gregor Rusas because some of our owners are from the Midwest, but how much longer we’re going to race there, I just don’t know.”

In the meantime Stidham still has an eye on the future and has brought out a number of young horses at the Delaware meeting. Three of those youngsters – two-year-old Supreme Aura and a pair of sophomores — look like they could have a future.

“Supreme Aura (who won at first asking in 1:09.81 ) is a Candy Ride we think has a future and we’re pointing him for the Sapling Stakes at Monmouth next.” said Stidham.  “Belgian (who has a win and second from three starts locally) is getting a little freshening. He’s also a Candy Ride and we’re going to give him a little time and bring him back a little later.

“And Miss Gracer is going to run Monday on the turf,” the trainer reported, “She impressed us winning in sharp fashion first time out then got bumped and shuffled around next time out. She’s an Uncle Mo we’ve always thought would be comfortable around two turns, so we’ll see how she takes to the turf on Monday.”

Stidham has seven wins at Delaware and has won 61 races overall this season thus far. He finished fourth in the standings at the Fairgrounds with 32 wins and the stable is approaching the $2 million mark in earnings.

Stidham, who was born in New Jersey, the son of a jockey who later became a jock’s agent. He’s nearly 60 now, but despite being around since the “old days,” Stidham is a forward-thinking type when it comes to taking advantages of the technology available in this age of electronic wonders.

“We have someone who works full-time on our website, keeping a weekly update on the outfit’s activities and he also handles the social media side of the business for us,” the veteran pointed out. “And we record our horse’s works and send those videos to our owners so they can see themselves how their horses are doing. It’s better than talking to them by phone and attempting to tell someone how a horse may have traveled, how they finished off etc. This way the owner can see those things for himself. This is the 21st century. If you don’t keep up you’ll be left in the dust.”

Arabian handicapping presented by our friends at Arabian Finish Line!

The final race of the day is the prestigious Delaware Park Arabian Classic H. (Gr.1) at 1 1/4 miles for a purse of $50,000. It has attracted a rock-solid field of 10 headed by leading horses Paddys Day and Easter Man. These two are starting to form quite a rivalry. Also to be considered is RB Nash, who just won the Bob Magness Memorial Derby (Gr.2) over the track going the same distance. The excellent mare, Ivory Shores, who is 4 for 4 this year at Delaware Park is a question mark. She’s an excellent runner, but this is one tough field. Quick And Rich and Thess Is Awesome both have the ability to place against these horses, but they have to put forth their best efforts.