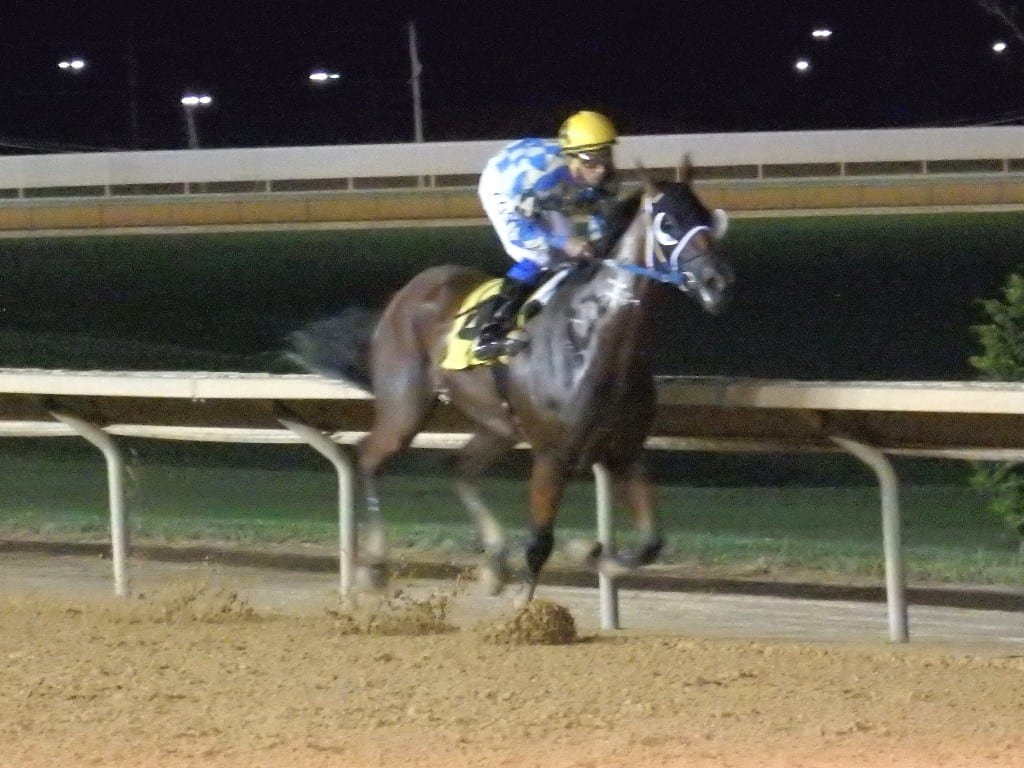 Much like the top three-year-old colts and geldings who traveled the Triple Crown trail in the spring at the national level, the local group of West Virginia-bred sophomores have taken turns beating each other throughout the spring and summer in limited allowance events and a one-turn stakes race on the Charles Town Classic undercard in April.

On Saturday night in the latest edition of the $50,000 Robert G. Leavitt Memorial for state-bred sophomore colts and geldings, Unrideabull served notice that he should be the one to beat in the $75,000 West Virginia Lottery Breeders Classic on the upcoming West Virginia Breeders Classics card over this strip on October 14. A homebred son of Bullsbay owned, bred and trained by Michael Sterling, Unrideabull lived up to his role as the 6-5 favorite under Carlos Castro by gaining command on the clubhouse turn and then drawing clear down the backside and holding sway late for a four-length score over Aaron’s Tap in 1:25.56 for the seven furlongs.

“This horse has always had plenty of natural early speed,” Sterling said of Unrideabull, who notched his second straight score and now owns four wins and $94,000 banked from six career outings including a win in the $50,000 Henry Mercer Stakes here last summer. “In his last couple of workouts we’ve been getting him to stretch out more. His last two works were at six furlongs and he was really sharp in both of them. The jockeys have always said he’s talented, but not the easiest horse to ride. He tends to act up a little bit in the gate and now he gets a little restless in the paddock, so we’ll have to work on that.”

In each of the first three starts of his career, Unrideabull was ridden by Gustavo Larrosa, who described the son of Bullsbay as his “next Lucy’s Bob Boy” after winning the Henry Mercer Stakes by six lengths last year. But Larrosa has not ridden the Sterling homebred since finishing fifth as the 3-2 favorite in the $75,000 Vinnie Moscarelli Memoril Breeders Classics here last fall. Castro has now ridden him three times, including back-to-back scores against state-breds.

“He likes to lug in, so I wanted to make sure to get around that other horse [Aaron’s Tap] before the turn,” Castro said. “Once he made the front he was doing it easily. I never really had to get after him. He’s got a lot of ability, but he’s not easy to ride. He’s got a lot of speed, and now he can carry his speed two turns. My first time riding him [in the Coin Collector] I didn’t know him and he didn’t know me. But that second start I knew what to expect from him, and now we know each other. I learned plenty from him those first two starts and now he knows me.”

Unrideabull joined a stellar list of prior Leavitt winners that included Donald’s Pride, Ghostly Thunder, Russell Road, Lucy’s Bob Boy and Bullets Fever. Three of those five horses had come back to win the $500,000 West Virginia Breeders Classic that fall, while Donald’s Pride was not WVBC-eligible and Bullets Fever opted for the West Virginia Lottery BC rather than the Classic last fall. Sterling admits he is more likely to travel the same path as Bullets Fever in two months in lieu of stretching out his homebred to a nine-furlong event going three turns here.

Aaron’s Tap, who had won his first two races for trainer Jeff Runco before running second to Hot Mic in the Coin Collector, saved ground down the backside and on the far turn to finish second in a good effort, his first around two turns in four career outings. Fellow Runco trainee Brass Bull rallied from well off the pace to edge Menetes for the show spot. Menetes had won his two previous outings after four consecutive runner-up efforts against maiden special weight foes, with his latest score being in a rare, three-turn allowance affair.