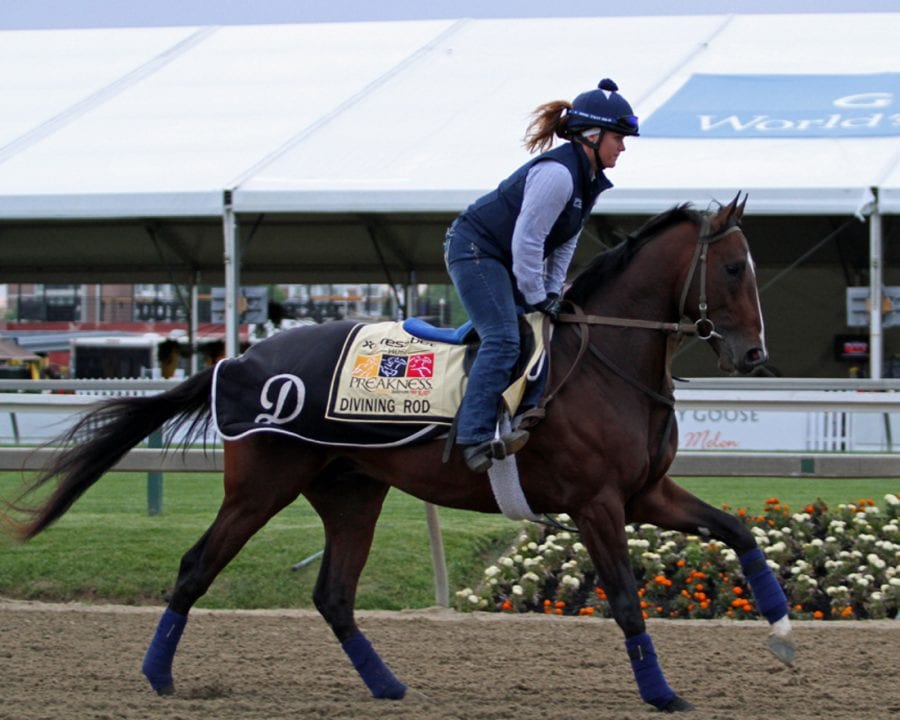 Divining Rod training before the 2015 Preakness. Photo by Laurie Asseo.

The seven-furlong Polynesian for 3-year-olds and up is one of two stakes on an 11-race program along with the $75,000 Twixt for fillies and mares, also at seven furlongs. First race post time is 1:10 p.m.

Third in the 2015 Preakness (G1) behind Triple Crown champion American Pharoah, Divining Rod went unraced for more than a year before winning a second-level optional claiming allowance last September in his first start at 4. He won a third-level event 22 days later and was second in the Fayette (G2) prior to the Cigar Mile, in which he took a 1 ½-length lead into the stretch but was caught late by Connect and beaten a head.

“He came back from the Cigar Mile with a bit of an issue so we had to give him some time. He needed a month and a half off after that,” Delacour said. “He’s doing very well. It’s not easy to find races for him that make sense and this, to me, is a perfect spot to come back. He should be plenty fit.

“He’s a horse that has run well off the layoff when you look at his career, so I don’t really worry about that. I’m just anxious to see him back on track,” he added. “He’s really a talented horse. I would say one of the most talented in our barn, really. He does things so easy and he’s also a very smart horse. He likes to have things his way but when he does he’s very efficient.”

The Polynesian will be the shortest race of Divining Rod’s career, which began with a front-running 2 ¾-length maiden victory going a mile Nov. 21, 2014 in his only previous race at Laurel Park.

He has finished in the top three in 12 of 13 lifetime starts with four wins and $731,604 in purse earnings, his biggest victory coming in the 2015 Lexington (G3) at Keeneland. He was also second in the Sam F. Davis (G3) and third in the Tampa Bay Derby (G2), Ohio Derby and Indiana Derby (G2) that year.

“I’m not too worried about the distance because when we ran him in the Cigar Mile we were going back to a one-turn mile and it was a little bit of a test because there’s always a lot of speed in those races,” Delacour said. “It looked like he was doing it comfortably without really having to work too hard. I think he’s got enough tactical speed.

“He’s not a 45 [-second] type of horse [for a half-mile] but he should be a couple of lengths off the pace or something like that. I think he’s quick enough to do that,” he added. “He’s a pretty smart horse. He doesn’t really like to use himself too early usually. He was when he was younger a little bit difficult to settle in the first part of the race, but that hasn’t been the case last year or this year.”

Daniel Centeno will ride Divining Rod from Post 7 at 118 pounds, six fewer than co-highweights No Distortion, Royal Squeeze and The Truth or Else.

The 4-year-old Munnings colt has been worse than third just twice in nine career tries at Laurel with two wins, the most recent coming in a third-level optional claiming allowance going six furlongs June 24 which snapped a nine-race losing streak dating back to the 2016 Frank Whiteley Jr.

“He loves being home. It’s nice when horses can walk out of their own barn and go to race. It’s a big advantage,” Lynch said. “He’s doing well. He had a lovely work last Friday in [59.80 seconds] and we’re expecting him to run back to some of his previous form. He had a little heat stroke up at Delaware last time and he’s been doing really well since, so fingers crossed.”

Matt Schera’s Vorticity is coming off a six-furlong allowance victory by a head over fellow Polynesian entrant July 6 at Delaware on a sloppy, sealed track. The 4-year-old Distorted Humor colt won the Marylander at Laurel to cap his juvenile campaign, then was second in the 2016 Jerome (G3) and Withers (G3) at 3 before an injury put him on the shelf for more than a year.

Vorticity returned to run third in a six-furlong allowance over Aqueduct’s inner track March 4, then won at the distance over a sloppy, sealed track March 31 at Laurel before finishing seventh in his return to graded company in the one-mile Westchester (G3) May 6 at Belmont Park.

“He’s come out of his last race really well,” Lynch said. “He’s caught a sloppy track a few times but he’s as good on that kind of track as he is on the dirt. He’s another that had a really good work last weekend, so we’re hoping for a peak performance.”

J.D. Acosta is named to ride Never Gone South from Post 5, while Sheldon Russell has the call on Vorticity from the rail. Both horses will carry 118 pounds.

“Both of those horses are going to run fairly forwardly placed,” Lynch said. “If someone wants the lead they can have it, but I’d say Never Gone South will be laying fairly close and Vorticity might stalk just a little bit off the pace. Ideally they’ll turn for home together and they can fight it out to the wire.

“I think Arnaud Delacour’s horse is going to have something to say. He looks like the class of the field,” he added. “The horse has been training really well at Fair Hill according to his work tab and if he shows up he’s obviously going to be the one to beat.”

Completing the field are multiple-stakes winners No Distortion, who captured the Carl Hanford Memorial July 15 at Delaware last out, and Royal Squeeze; 2017 Sir Shackleton winner The Truth or Else; and multiple stakes-placed Final Prospect and Rockinn On Bye.