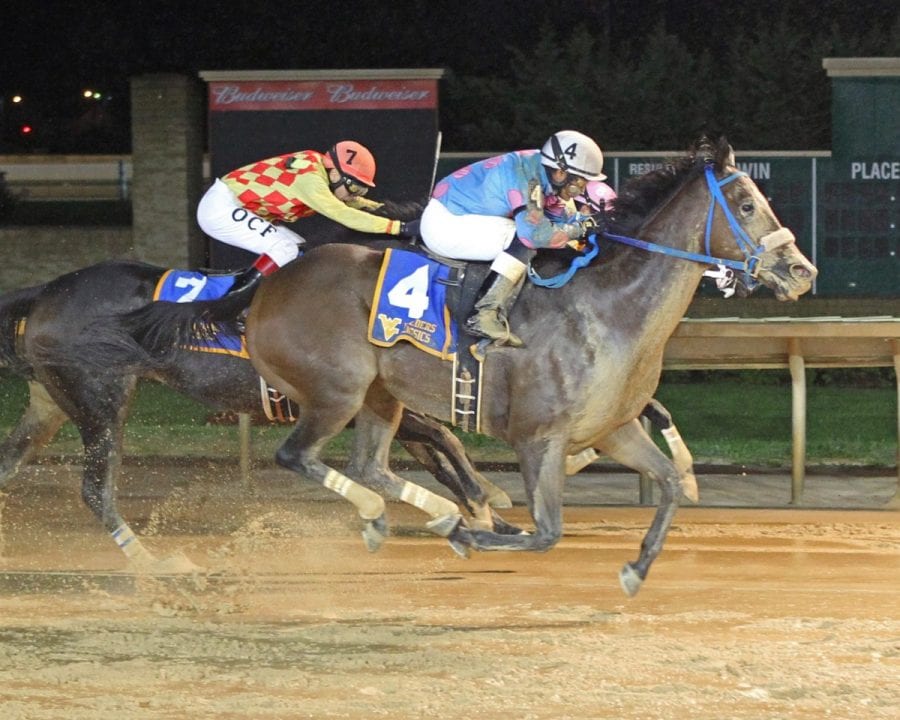 Both Greenway Court (8-1) and Lucy’s Bob Boy (8-1) are entered in the evening’s seventh race, a $29,000, seven-furlong allowance contest for West Virginia-breds.

Trained by Sandra Dono, Lucy’s Bob Boy is one of West Virginia’s all-time leading money earners. The Flatter gelding has won 26 times in his career and earned more than $1 million. Among his wins is the 2012 edition of the West Virginia Breeders Classic.

But 2016 was not kind to Lucy’s Bob Boy. He won just once in six starts, earning just $25,000 in the process. In his other starts last year, he showed his customary early speed before fading; he finished as high as third just once in the other five starts. In his last three, he was fourth, fifth, and seventh and did not finish closer than five lengths to the winner.

Lucy’s Bob Boy enters this event with a string of seven works recorded since May, most recently a bullet half-mile in 47 2/5 seconds over the strip. Gustavo Larrosa has the mount.

Greenway Court hasn’t raced since winning the 4 1/2 furlong West Virginia Breeders Classic Dash for Cash in October, when he rallied to be up late by a neck over the speedy R C’s Daisyduke. That was Greenway Court’s only 2016 win, from four starts, which came on the heels of a spotless five-for-five campaign in 2015.

Greenway Court, a homebred for trainer-0wner James Casey, is a 16-time winner whose has scored three times on West Virginia Breeders Classic night. He has earned more than $420,000 in his career.

Though he has experienced success at this seven-furlong distance, Greenway Court has become in recent years a 4 1/2 furlong specialist. He’s been working towards this race since April and most recently breezed a half-mile in 48 seconds flat on August 4. Regular pilot Antonio Lopez is up.

Neither is favored here, however. Favoritism instead falls to Ellie’s Lil Man — another Casey trainee — who crushed an allowance field going 1 1/8 miles last out and owns seven wins from 17 career starts. He’ll have Christian Hiraldo in the irons.

Coincidentally, Casey also has the favorite in race four, which is another two-turn, $29,000 allowance contest for state-breds. Castle Bound (5-2) hasn’t raced since February but carries a three-race win streak into this event. Hiraldo has the mount.