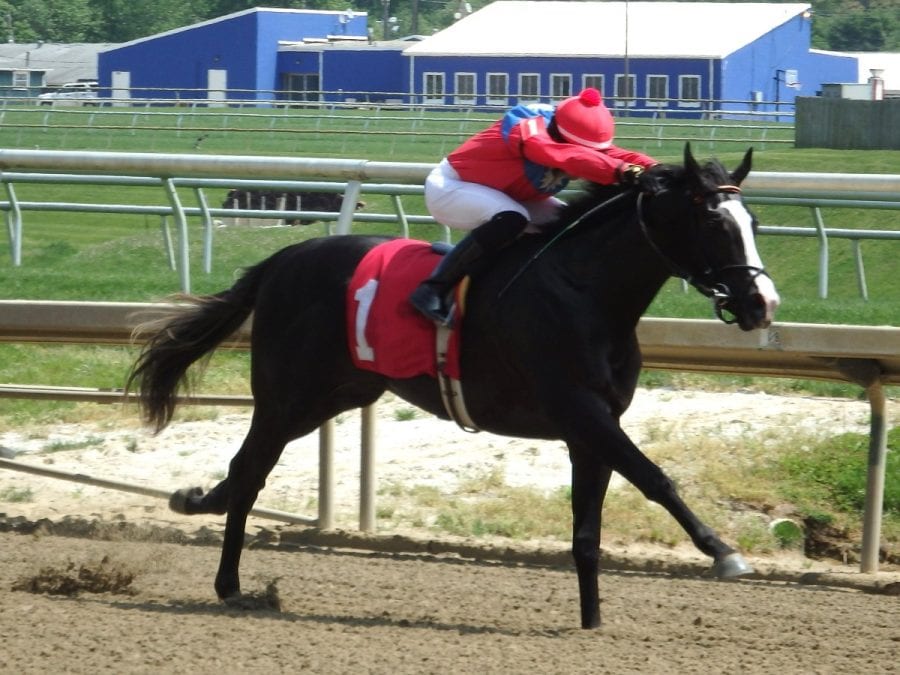 Wonder How, 8-1 on the morning line for the Strike Your Colors, won at first asking at Laurel. Photo by The Racing Biz.

Kowboy Karma dazzled in his debut. Now he’ll get a class test.

The two-year-old Kodiak Kowboy gelding won off by a dozen lengths at Delaware Park three weeks back, cruising six furlongs in a sharp 1:09.70. He earned a Beyer speed figure of 84 that day, tied for the 10th best recorded by a juvenile so far this year.

He did, in short, nothing wrong. Thursday he’s 2-1 in the morning line for the $50,000 Strike Your Colors Stakes and will see how he stocks up against other winners.

“He has done well,” said trainer J. Larry Jones. “He won his first start pretty handily with as many lengths as he won by. It appears he came out of that race good. He breezed really quick on Thursday morning (four furlongs in :46 4/5). It seems like everything is good with him right now, so we are looking forward to the stake this Thursday and his continued development.”

Alex Cintron will ride, and a repeat of his last — or ordinary second-race improvement — will make him the winner here.

The second choice in the morning line — and the only runner here with multiple victories — is Cheese On (3-1). The Cal Lynch trainee is two-for-two, winning a maiden race at Laurel Park and an allowance at Delaware, both with Sheldon Russell in the irons. He’s the only horse from his two races to win next out, but the good news is that he, like Kowboy Karma, has shown the ability to run into a pace, which not every juvenile can do.

Unusually for a juvenile race, this one doesn’t seem to have a ton of early zip. The speed of the speed appears to be American Talent (9-2),  The Talent Search colt won off by seven in his debut, at Parx, despite running greenly through the lane. In that race, he was on the engine throughout, dueling heads apart through the opening quarter in 22.17 seconds and the half in 46.10 before drawing away. The runner-up that day, Smooth B, won his next start. The Keith Nations trainee will have Jose Ferrer in the irons.

Perhaps the most interesting of the remainder of the eight-horse field is Ron Potts trainee Afterburner (8-1). The Take Charge Indy gelding’s first two starts both came on synthetic, a debut win followed by a fourth in Woodbine’s Victoria Stakes.

Arabian handicapping is provided courtesy of our friends at Arabian Finish Line.

The $20,000 allowance race for Arabians going 1 1/8 miles features none other than Darley Horse of the Year Paddys Day, who was handed his first defeat this year when Easter Man beat him last time out. There is no Easter Man in this race, so the money will be on Paddys Day and jockey Ricardo Chiappe. Most other horses will likely be at high odds, but RB Hocus Pocus, with Keibar Coa aboard, could get a piece. Candy Land Man is typically in the top four, so he could be there as well.