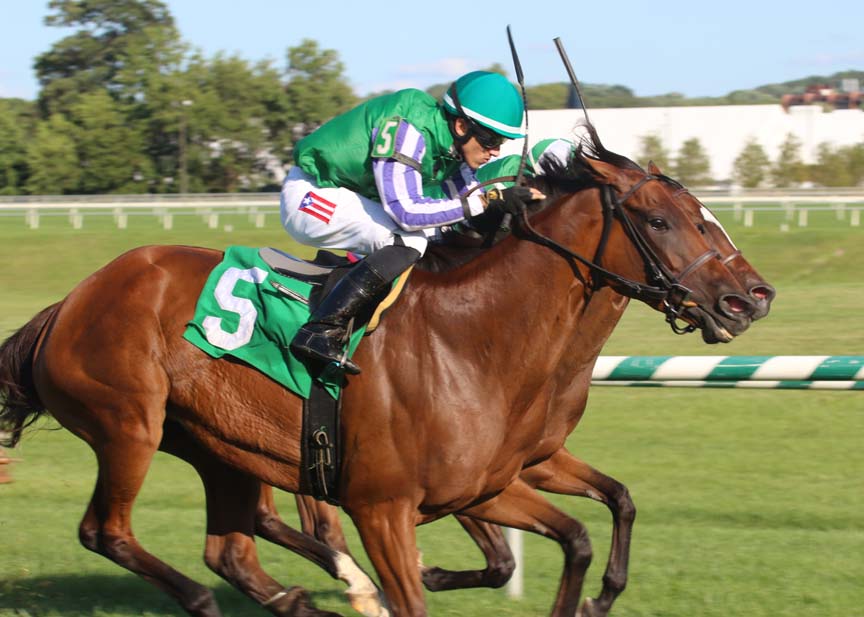 Sweet Sandy was along in time to take the William M. Backer Stakes. Photo by Laurie Asseo.

You win some. You lose some.

And, as a wag once observed, every once in a while one washes up on the beach.

And so, Saturday’s $75,000 William M. Backer Stakes for Virginia-bred/sired fillies and mares three and up at Laurel Park went to a horse whose connections had been on the fence between this race and a Delaware Park allowance and whose jock was merely their third choice.

It was not, in honesty, all that easy to see why prior to the race. Sweet Sandy had seen a substantially similar field two back in Nellie Mae Cox and made only a modest impact, finishing sixth at 53-1 odds. Her follow-up, going 1 1/2 miles at Delaware, netted a second-place finish.

“The filly really wants to go a mile-and-a-half, a mile-and-three-eighths,” explained Hodsdon, a former steeplechase jockey.

Or, apparently, a mile-and-a-sixteenth over yielding ground.

That left Hodsdon and owner Bridget McFarland of Fig Tree Farm with their third choice. But it’s not exactly settling when you end up with Jevian Toledo, who leads all Laurel Park jockeys at the meet in earnings — over $800,000 — and is tied for second in wins with 24.

“We looked around and found Toledo and he did a brilliant job with her,” Hodsdon said.

The way the race unfolded didn’t hurt, either.

Longshot Grace Is Ready sped to the early lead, taking the field through an opening half-mile in 48.10 seconds — a sharp pace over the yielding turf course this day. Even-money favorite Queen Caroline, winner of the Nellie Mae Cox in June, had that one in her sights while in second.

Meanwhile, Sweet Sandy was last, more than 15 lengths from the front — and, crucially, saving ground. Toledo managed to hug the rail around both bends, and though she was still last after six furlongs in 1:13.11, Sweet Sandy was beginning to unwind.

Entering the lane, Toledo guided Sweet Sandy out to the four path for clear running and turned her loose.

“I was thrilled when he pulled her to the outside when she’d be in clear running because she’s just dead game and will run horses down,” Hodsdon said. “I didn’t know if she’d be able to get to the one in front. But there was a little bit better pace this time than last, which was great.”

Just as the favorite looked likely to take over, Armoire, with Daniel Centeno up, burst through along the rail and surged to a clear lead. That left Sweet Sandy with five lengths to make up and just a furlong to do it.

At that point, Toledo said, he had his concerns.

But, he added, “By the sixteenth pole, she was giving me everything she had.”

It was the fourth win of Sweet Sandy’s career, from 19 starts, and pushed her earnings to over $129,000. It was also her first win in Fig Tree Farm’s green and purple silks. Fig Tree had claimed her last September for $20,000 from trainer Alison Hassiq and owner Juan Arriagada, who in turn had previously claimed her from trainer Tom Proctor and BNMC LLC.

“I have galloped for Tom Proctor and knew her a little bit,” Hodsdon said. “Bridget (McFarland) had had her as a layup. After she got claimed off of Tom Proctor, Bridget just kind of watched where she went because she always liked the filly and then just went for her.”

That looks like a good move now, with a stakes win under her belt and a growing program for Virginia-bred and -sired horses.

“It’s great to have these Virginia-bred races for these horses, and the chance to run in that company is a huge opportunity for them,” the stakes-winning trainer said as her newly minted stakes winner was led back to the barn.

NOTES In the day’s other route stakes, Special Envoy, off at 1-20 odds, blitzed the field in the Hansel Stakes, winning by eight lengths for his second consecutive stakes win. With Daniel Centeno up, he was never challenged en route to the win in 1:46.59 in 1 1/16 miles. Special Envoy, trained by Arnaud Delacour, is owned and was bred by Mr. and Mrs. Bertram Firestone, who also bred Camptown Stakes winner Northern Eclipse.