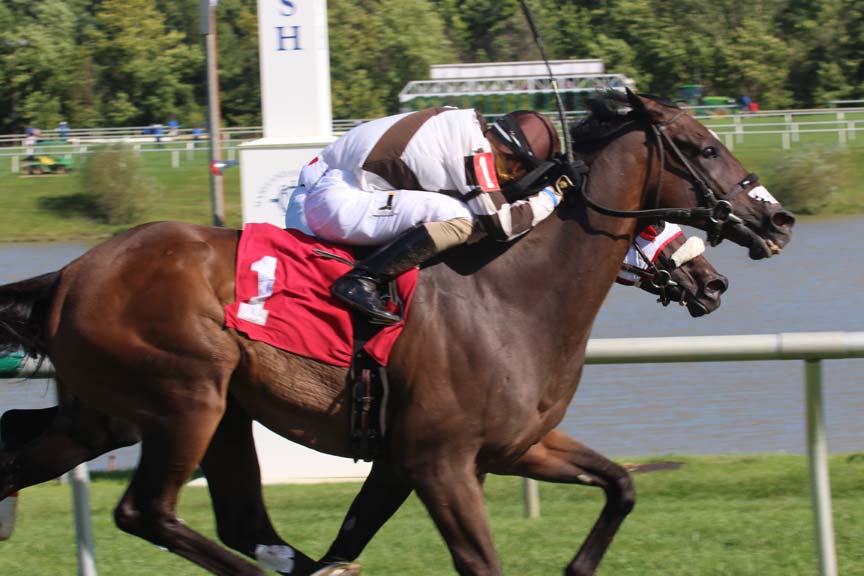 Two Notch Road was up late to win the Meadow Stable Stakes. Photo by Laurie Asseo.

Still going strong at the age of 10, Two Notch Road earned his sixth career stakes victory and fourth in Maryland by wearing down favored Tiz Our Time through the stretch to get his head in front at the wire in the $75,000 Meadow Stable for 3-year-old and up.

“He’s a special horse. He is a very special horse,” winning trainer and co-owner Glenn Thompson said. “The reason he lasts so long is because we give him the winters off. They used to do that all the time with horses in the past. It’s not because they run on the turf, it’s because turf horses get a break.”

Jockey Alex Cintron and Two Notch Road were content to settle in fifth saving ground while Tiz Our Time, front-running winner of the White Oak Farm, broke fastest from his far outside post and ran the first quarter in 22.72 seconds and the half in 46.35.

Cintron began to get into Two Notch Road as they rounded the far turn and swung to the far outside straightening for home, steadily gaining ground down the center of the track as Tiz Our Time desperately tried to maintain the lead. Stakes winner Lime House Louie rallied from far back for third, 4 ¼ lengths behind.

“Coming around the turn I felt like I was going to get there and turning for home I saw the other horse way in front of me,” Cintron said. “I just let my horse do his thing and he made up ground easily and at the first wire I knew we were going to get him.”

In the day’s other sprint stake, Toby Roth’s Northern Eclipse, unable to hold on to the lead in her last stakes attempt, had no such trouble putting away similar rivals to earn her second straight win in the $75,000 Camptown for fillies and mares 3 and up.

It was the third win from six starts and first in a stakes since being claimed by Roth for $16,000 out of a maiden win last fall at Laurel. The winning time for 5 ½ furlongs was 1:05.69 over a yielding Bowl Game layout.

“When you have the best jockey and the best horse, you can always win a race,” Roth said. “When we got this horse we gave this horse the winter off and got her ready for these races. It’s how you take care of the horse that counts.”