For Brion, no fairy tale but Spa debut still special 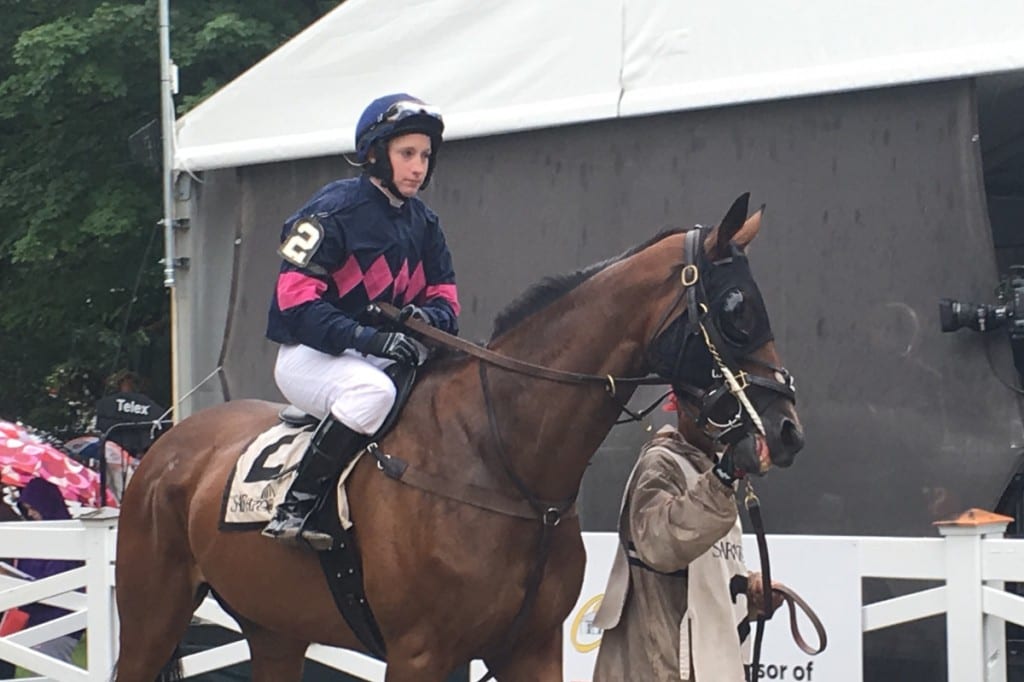 Keri Brion aboard All the Way Jose. Photo by Teresa Genaro.

Teresa Genaro’s Spa Diary, an occasional feature  in which she shares with us some of the Midlantic region’s connections to Saratoga, returns once again.

On the morning of July 27, Keri Brion sat on a golf cart on Saratoga’s backstretch and glumly watched torrents of rain soak the turf course. She was scheduled in a few hours to ride her first race at Saratoga, in the Grade 1, $150,000 A.P. Smithwick, no less, but with incessant rain forecast for the next few hours, it looked like that debut might be delayed.

Assistant to Hall of Fame trainer Jonathan Sheppard, Brion had decided in early 2016 that she wanted to give riding one more shot. In 2015, she rode just once; last year, she picked up 23 mounts in jump races, earning $74,190. This year, in 12 races, she’s already surpassed that total.

“At the beginning of last year, I decided to give this one more go, and if I didn’t win a sanctioned race, I was going to stop trying,” she said, standing near Sheppard’s Saratoga barn the day before the race.

“Sanctioned races” are designated by the National Steeplechase Association, and they don’t include the point-to-point races in which Brion had long competed. But in April of 2016, Brion got what she calls her “big break” when Sheppard put her on Lune de Caro in the Glenwood Park at Middleburg. They finished third, but won a month later at Percy Warner in Tennessee.

“I don’t want to play the ‘girl card,’” she said, “but a lot of this game is about getting the right opportunities, and I was riding some not-very-good horses and having stupid falls, and I know people were saying, ‘She’s just not cut out to ride horses.’

“I’m a competitive person, so that was hard to accept and move on.”

In addition to riding for Sheppard, she won three races last year for trainer Jimmy Day on Orchestra Leader, and two on him this year. She got her first win on her Smithwick mount, All the Way Jose, at Fair Hill in May after finishing second on him at Nashville.

“She had won the race in Nashville the previous year for us,” said Sheppard, “so she’d shown that she can do it. I thought it might be a good opportunity to see how she did, and he ran very well and was second. The owner was pleased.

“We decided to run him back at Fair Hill and give him another shot, and darn if she didn’t win, and impressively.”

Still, Brion wasn’t sure that she’d retain the mount in Saratoga, but Sheppard had no such doubts.

“She’s had two rides on him and two good rides,” he said. “It makes sense for her to stay on the horse.”

“Jonathan is super-loyal and he honors hard work,” said Brion. “This is really exciting. Riding at Saratoga is on my bucket list.”

Despite the driving rain early in the day, the Smithwick wasn’t postponed, and a little before 1 p.m., Brion and All the Way Jose made their way from the paddock to the racetrack, the horse having an advantage on the rider, with several Saratoga races to his credit, including a win back in 2014.

The pair settled at the very back of the 10-horse field, as the horses rounded the track for the first time in the 2 1/16-miles race. Coming into the stretch the second time, Brion and All the Way Jose were in fifth place. As they approached the sixth fence, Brion made a decision that she later regretted.

“I asked for a really long spot,” she said, referring to the place where she wanted Jose to begin his jump. “I should have sat and waited for him to make the decision. He got confused and he just galloped through the fence. We jostled over the hurdle and he unseated me.”

Because they were running on the outside, spectators could easily see Brion come off to the right of the horse, safely out of the way of the rest of the field, and she stood quickly, to the relief of people watching. All the Way Jose continued on the course—minus the jumps—and was unhurt.

“I was sore the next day, but both Jose and I were back at the farm the next day, and he’s in good form, bucking and rearing in the paddock,” she said. “Only my ego was bruised.”

So the fairy tale didn’t come true for Brion, ending with a thud on the turf, and last year, Sheppard’s decades-long streak of winning a race at the Spa ended, too, when his final starter of the year, in the final race of the meet, failed to make it to the winner’s circle. While Sheppard felt pressure each meet once the streak was brought to his attention several years ago, that pressure was better than the alternative.

“All good things come to an end, and it’s nice to be here. I enjoy being here,” he said. “Though to be honest, I’d rather be trying to keep my streak going.”

And maybe he will with a horse ridden by Brion, who is likely to ride All the Way Jose in the Grade 1 New York Turf Writers Cup Handicap on August 24. Brion will have another shot to get her first win here next week in the Mrs. Ogden Phipps Stakes on a horse for trainer Jimmy Day named Fall Colors, a seven-year-old mare on which she finished second at Fair Hill in May.

That first win at Saratoga will be special no matter what horse she’s riding, but there would have been something especially sweet if it came on seven-year-old All the Way Jose.

“I rode him as a yearling, and now six years later, I rode him in a Grade 1,” she said. “It’s special when you’ve known them, and grown up with them as they’ve grown.”