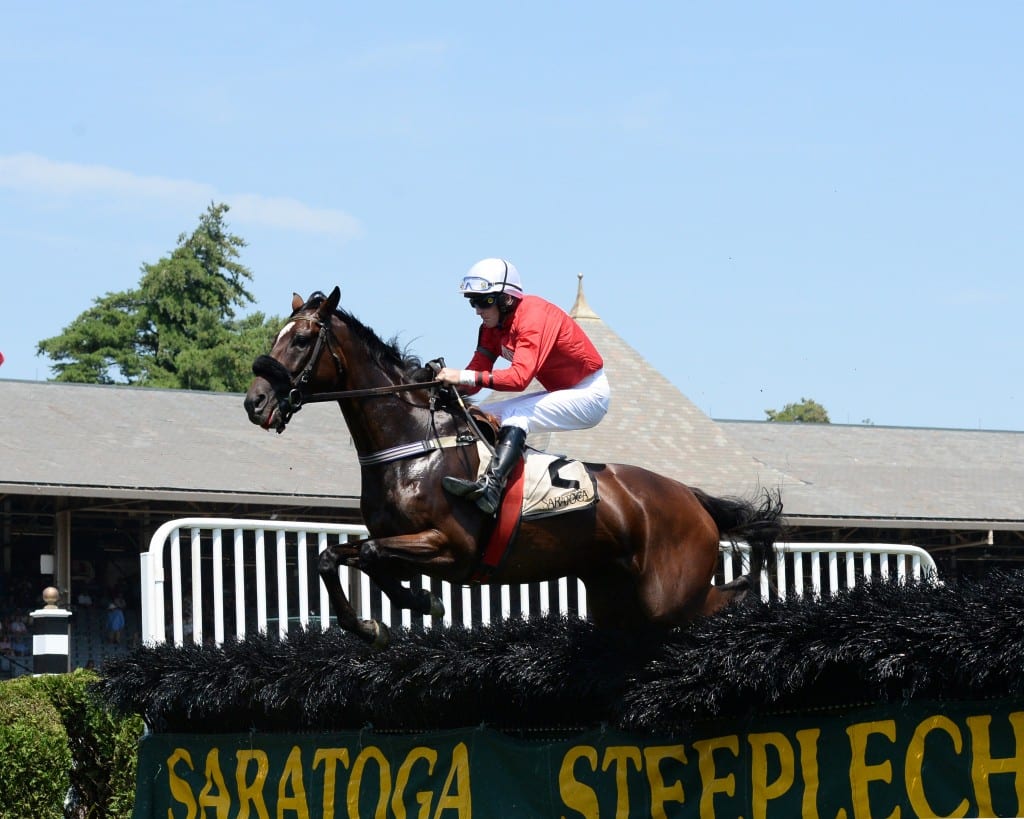 Mrs. Thomas Voss’s Swoop won her first career stakes to start Thursday’s card at Saratoga Race Course, rallying from last to post a win by three-quarters of a length in the $75,000 Mrs. Ogden Phipps for fillies and mares 4-years-old and up in the day’s steeplechase action.

The 7-year-old Swoop stayed off the pace from the starting point, with stablemate Sarah Joyce going to the front. Jockey Bernard Dalton coaxed Swoop near the final flight and challenged Wigwam Baby in the final turn and overtook her challenger in the flat ground-portion in the flat, completing 2 1/16 miles in 3:53.36 on the inner turf.

“I thought I had the perfect trip,” said Dalton, who piloted Swoop to a second-place finish in the Iris Ann Coggins Memorial on May 27. “She has a lot of speed. It was just a matter of jumping all of the jumps and putting her into gear. It’s always nice to win any race at Saratoga, especially a stakes race.”

Swoop, trained by Elizabeth Voss, daughter of the late Thomas Voss, won her first stakes race in her 24th career start and finished on the board for the first time in four starts at the Spa. Swoop was bred in Maryland by Mrs. Voss. She is a seven-year-old mare by Louis Quatorze out of the winning Caveat mare Admonish.

The victory commenced a memorable week for the Voss family, who will see Thomas posthumously inducted into the National Museum of Racing Hall of Fame on Friday. Thomas Voss won five National Steeplechase championship titles as leading trainer (1997, 2000-2002, 2011).

“I knew not having this last jump would definitely benefit her,” Elizabeth Voss said. “She’s a little green and she’s only run three times over hurdles, but I knew she has that speed at the end that would benefit not having that last fence. She’s just a careful jumper. I said to pop her out back to let her see the fences and Bernie rode her perfectly. We’ll see how we come out of this one before we plan where to go next.”

Irish-bred Sarah Joyce, carrying the highweight of 155 pounds, finished in the money for the fourth time in six starts, challenged Swoop until the eighth pole and settled for third.

“Sarah Joyce ran good as well, jumping is her strong point,” Voss said. “I knew this wouldn’t hurt her, having a half a mile sprint at the end. She also had to carry up to twenty pounds more than some of the others in the field and she’s little so that probably got her in the end. They’re both nice fillies.”

Lady Yeats, For Goodness Sake and Amazing Anthem completed the order of finish. Fall Colors fell jumping over the second flight and Amicalola voided the sixth jump, lost the irons and did not finish.