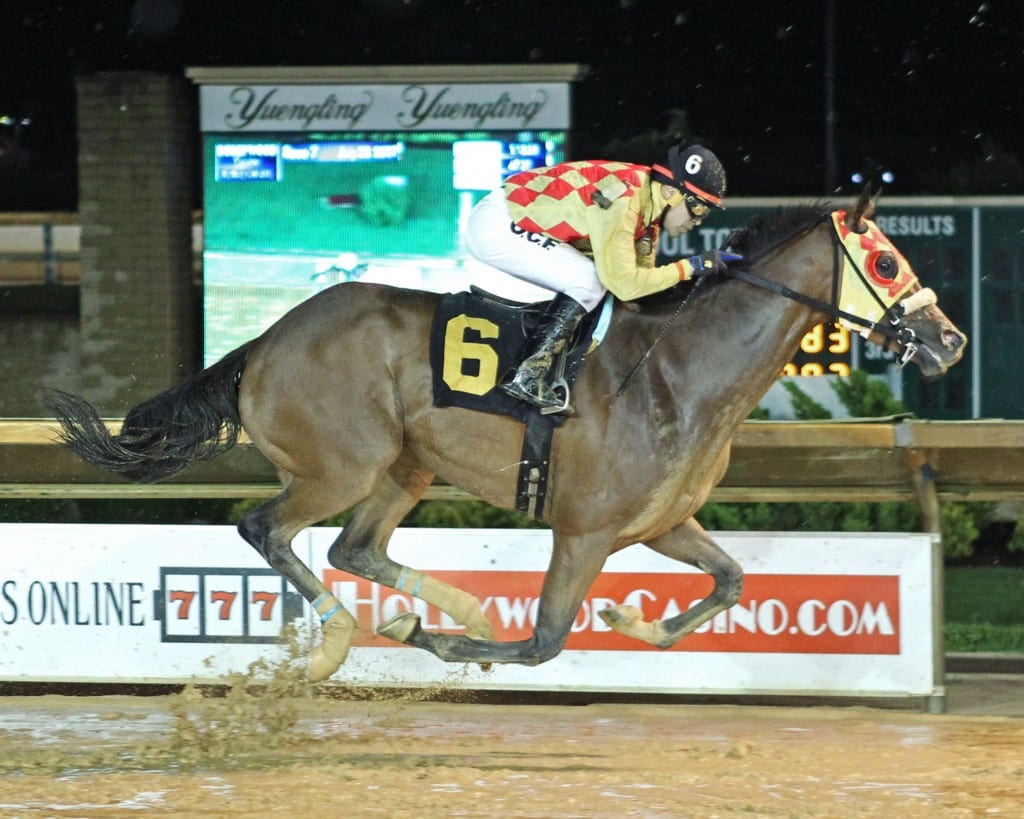 Fear the Turtle cruised home to win at Charles Town on July 22. Photo by Coady Photography.

During a brief career that began less than one year ago, Fear the Turtle has taken trainer David Walters through a modest roller coaster ride. The West Virginia-bred, four-year-old son of Great Notion has recorded three wins by a total of 18 lengths and also suffered three defeats where he did not finish in the top three.

July 22 at Charles Town, in his third start of the campaign, however, Fear the Turtle displayed the attributes that Walters knew existed all along when he rallied from well off the pace to overhaul 4-5 choice Tampered Character to prevail in a two-turn allowance for state-bred older runners by five lengths in 1:18.92 for the 6 1/2-furlongs with Oscar Flores aboard. Fear the Turtle had also won his previous start back on June 1, again with Flores aboard, defeating favored Brass Bull by nearly two lengths in 1:19.96 for the same distance.

“The other night there was a lot of speed in the race, so it looked like it might set up for him,” said Walters, a Maryland native who has always been a fan of the Baltimore Orioles and the athletic teams at the University of Maryland, thus leading to the horse’s name. “It was a good spot for him. That non-winners of three lifetime race can either come up really tough or a little soft depending on who’s in there. I thought the race looked deep the other night. Sometimes those speed horses get out there and just keep going.”

Fear the Turtle has two of Walters’ 10 wins so far this year. The veteran conditioner has more than 1,400 wins in his career with purse earnings in excess of $13 million.

In a sense, Fear the Turtle won his career debut last September 17 at Charles Town in just that fashion. Sent out as the 9-5 second choice in a two-turn maiden special weight event for state-bred three-year-olds and up, Fear the Turtle gained command down the backside and then proceeded to widen his advantage with every stride en route to a 12-length score in 1:20.75 with Flores aboard. It was a promising score for the Fairview Farm homebred out of their talented and productive mare, Longfield Star, who has had two foals since.

“We knew leading up to his first race that he had a lot of ability,” Walters said. “He always trained like he was going to be a good horse. I took my time with him last year and found a race that fit him first time. He won that race nicely, but then he got really sick. I started him two more times, but he wasn’t quite at 100 percent for those races. He was a little short [Nov. 4, finishing seventh as the even-money choice in an allowance] and he didn’t like the track for that last start [on Dec. 7, finishing fourth as the 8-5 favorite in another allowance].”

Walters gave Fear the Turtle ample time off to recover over the winter and brought him back slowly. Off one bullet workout from the gate, Walters sent Fear the Turtle into a two-turn allowance here on May 11, where he finished a nondescript fifth as the 5-2 second choice over a sloppy track with Carlos Carrasco aboard. But Fear the Turtle bounced back out of that race in good fashion, when reunited with Flores, has lodged back-to-back victories.

“He was probably a little short for that first start back, but I wanted to get a race in him and that’s what was available,” Walters said. “He came out of that race super and then ran really well in his next start. I just always tried to keep him in the allowance conditions where he belongs. The other night he was in that non-winners of three races lifetime and raced really well. It was one of those nights where the speed kind of helped set things up for him, and he didn’t seem to mind the track taking a little rain during the night.”

Fear the Turtle will likely make his next start in a non-winners of four races lifetime allowance next month, but Walters seemed reluctant to think he would make his stakes debut in the Frank Gall Memorial for state-bred older horses, a major local prep for the West Virginia Breeders Classics card here on October 14. Walters has a half-sister to him by Dance With Ravens who is expected to make her career debut this summer, and a yearling full brother at his farm. Fairview Farm [Ellen Walters] did not breed Longfield Star in 2014.

Longfield Star won the 2001 edition of the Cavada for Walters, one of her eight career victories en route to a lifetime bankroll of $254,077. Walters has since won the featured event for state-bred fillies and mares with Carnival Chrome in 2007 and again with Cuppa Mocha Mojo two years ago.

Last fall, Walters saddled Eutaw Street, another talented Fairview Farms homebred, to a third-place finish in the West Virginia Dash for Cash BC and a win in the It’s Only Money Stakes on his home track. But his efforts to find a race for the sprinter this year have been fruitless and frustrating. In all, Walters said he has entered Eutaw Street 15 times for allowance races at Charles Town since April, but none has filled. He will likely run the homebred at Mountaineer Park next month on West Virginia Derby Day and possibly once on the turf at Laurel Park.