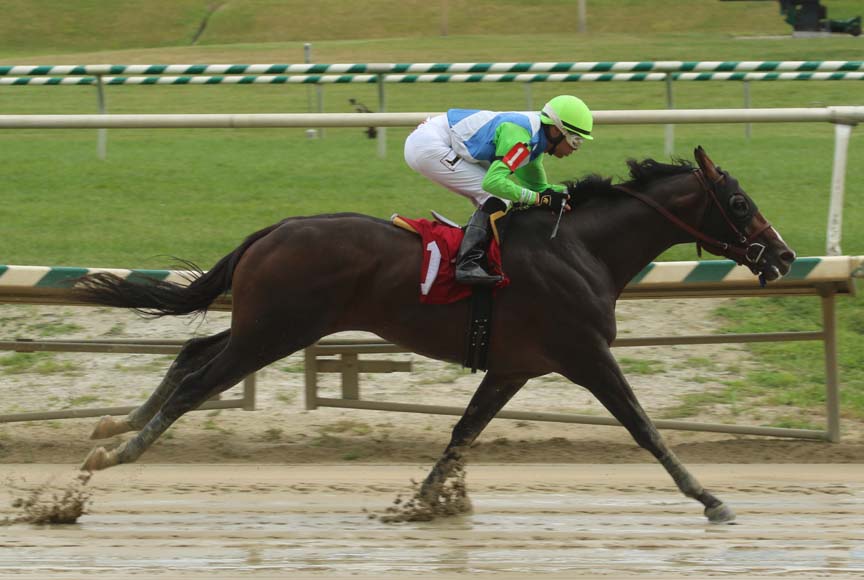 No Dozing took the Concern Stakes at Laurel Park. Photo by Laurie Asseo.

Sometimes what happens before — or in the first jumps of — a race is what determines the outcome.

Certainly, today’s $75,000 Concern Stakes at Laurel Park for three-year-olds going seven furlongs on the main track bore all the relevant hallmarks. There was No Dozing, the 4-5 post time favorite, wearing blinkers for the first time.

“They put blinkers on him today,” said winning rider Daniel Centeno, who annexed the late double with a pair of favorites, including Keep Your Distance in the nightcap. “We were trying to put him right in the race.”

In his six prior races — all around two turns and all in graded stakes company — the Arnaud Delacour trainee had been no better than fourth at the first call. Perhaps not coincidentally, he was winless in those races, three of which had come with Centeno in the irons.

Getting in the race early figured to be a bit of a challenge today. Among his three rivals were two, Proforma and Alex Again, arriving here off starts in the six-furlong Jersey Shore Stakes at Monmouth Park, a race in which both had shown sufficient speed to be in the early mix in this seven-furlong test.

To exacerbate matters, No Dozing broke a bit slow, finding himself in last in the first jumps. But nobody seemed much interested in taking the lead, and Centeno and his mount were quickly able to cruise up a railside seam to grab the lead. They were up by a length after that leisurely opening quarter.

“Everybody was taking a hold so easy,” Centeno said of the early going. “The first quarter was really easy, and then we started to pick it up.”

The second quarter went in a sharp 22.75 seconds, the half-mile ticked off in 45.89. Honor the Fleet was in No Dozing’s hip pocket, and it looked for all the world like the former, under jockey Sheldon Russell, had the momentum to spring the upset.

The two runners eyeballed each other, and approaching the quarter pole, Honor the Fleet appeared to hold the advantage. But as Centeno, using a left-handed whip, went to work on No Dozing, the horse responded willingly and began to pull away. The final margin was four lengths, and the running time for seven furlongs over a muddy, sealed main track was 1:22.85. Honor the Fleet held second, and Proforma was third.

“On the turn, I got plenty of horse, then turning for home it’s like he’s done,” Centeno said. “He switched leads, I hit him a couple of times, and it’s like, ‘It’s time to go,’ and he’s gone.”

No Dozing has “always been like that,” Centeno said, adding, “I think he’ll get better. Just mentally he’s only three. He ‘s been running in tough races. Maybe now with the blinkers he’ll get a little more focused, maybe now he’ll wake up. He can be a nice horse.”

With the win, No Dozing snapped a six-race winless skein. He now has three victories from nine career stsrts, and the winner’s share gave him $262,340 in purse earnings. He was bred by Mr. and Mrs. Roy Jackson and is owned by their Lael Stables.