Savvy Pecoraro barn off to fast start at Delaware Park 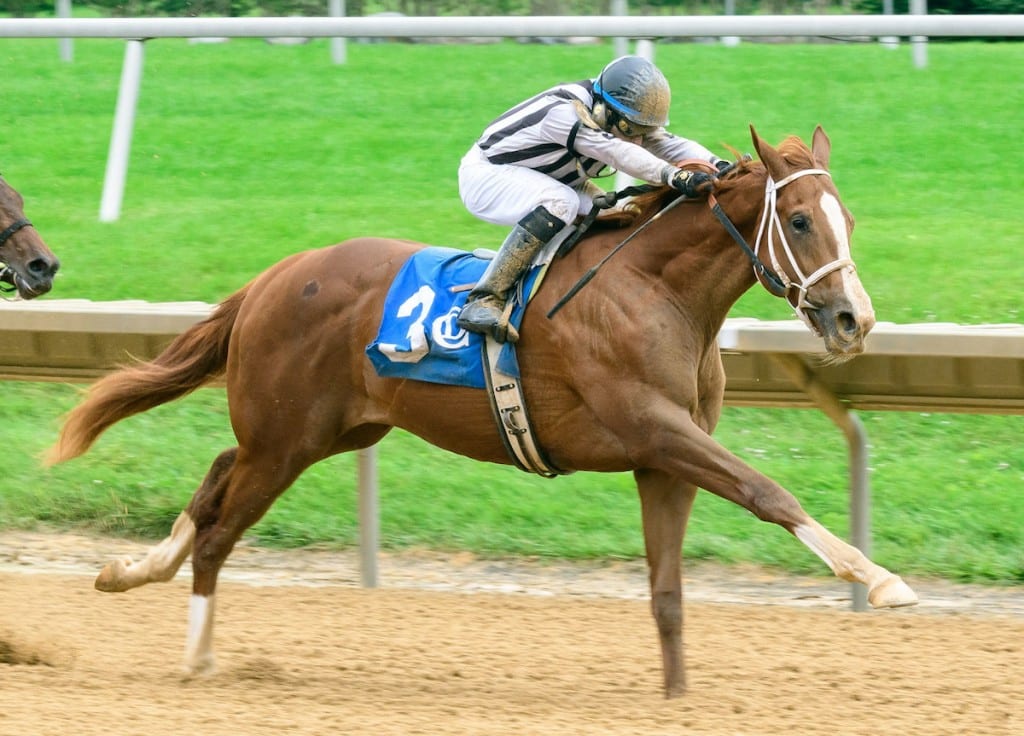 Whereshetoldmetogo won at Delaware Park on June 8. Photo by HoofprintsInc.com

If a chartcaller were describing the actions of the runners from the Pecoraro racing stable in the first six weeks of the current race meeting, the comments might well read, “Broke quickly from the gate and showed a strong turn of early foot.”

Through last week’s racing Anthony Pecoraro has sent out 10 winners to be in a tie for leading trainer with Michael Catalano, and while the stable’s success may have come as a surprise to some, it wasn’t to the veteran horseman who’s been training for more than three decades.

The Pecoraro organization raced under the radar last season here, winning 13 races, and the trainer also had a quiet winter at Tampa, winning just four races from 30 starters. But while the figures would lead many to think the stable was struggling, Pecoraro knew he had a number of bullets in his gun he hadn’t fired yet.

“It was a flat period, there’s no question about that,” Pecoraro commented recently after training hours, “but every stable goes through those times. We had fewer starters last year and some of our better horses were getting older. But last fall we came out of the sales with the feeling we had made some quality purchases that would, in time, pay off.

“As to the winter, that was by design really,” he continued. “We had several young horses we knew had talent but as is often the case with babies, some had issues that took time to resolve while others were late to mature and develop. So we just took our time with them and when we headed north, I was confident we had some quality stock that was going to win some races for us.”

The Delaware racing program has carded more 2-year-old races than any other track in the area and has also written a number of three-year-olds and up maiden sprints, and Pecoraro runners have been active in both categories. Pecoraro had 10 starters in 3-year-old races and five of them won for a sizzling 50% win percentage, and the trainer said several of those were late-developing types that just took time to come around.

“I knew we had much better stock than last season,” he said. “It was just a case of having the patience for them (the young runners) to realize their potential.”

One of those youngsters, Threeohtwocassie, looked impressive breaking his maiden earlier in the meeting, and Pecoraro thinks his 2-year-old El Padrino colt, Whereshetoldmetogo is a horse with a promising future.

“He came from off the pace like a good horse when he broke his maiden, and then was a solid second on DelCap day in his first try against winners,” Pecoraro said. “He’s Delaware-certified like all of my young runners, and we’re looking to run him on Owner’s Day (September 30). I think he’s got the talent to be a really nice horse.”

And Whereshetoldmetogo is a prime example of Pecoraro’s shrewd sense of value when it comes to picking young horses out of the sales ring. Whereshetoldmetogo was purchased for just $7,000 from the Fasig-Tipton Midlantic 2016 fall yearling sale in Timonium. Pecoraro puts a premium in purchasing younger horses on a horse’s looks and temperament than its pedigree.

“I just prefer to spend more time watching young horses, getting a feel of how they move and travel more than digging up stats and studying pedigrees,” the trainer said in 2014.  “I would like to think I’ve learned down through the years how to get a feel for a horse’s make up by observing them. It’s certainly not an area where you’re always right, and they (the purchases) don’t always turn out to be good ones.  But making enough of the right choices is what keeps you in the game.”

As a member of the board of directors for the Delaware Thoroughbred Horsemen’s Association, Pecoraro is also interested in the big picture when it comes to Delaware Park and its place in the Mid-Atlantic racing picture. The trainer said he sees some positive signs for the racing program;s future.

“I think the overall racing product has improved some in the past few seasons, and Mr. (director of racing John) Mooney and his people have been active in the off season recruiting new outfits to race here,” Pecoraro commented. “And I’m also pleased with the racing surface this season. I think the new track super (Ken Wilson) has done a nice job of making the track a good one to train over and making it a fair strip for the races in the afternoon. For a long time horses that liked to close from off the pace were at a distinct disadvantage racing here, but that’s not the case anymore. The track seems to be playing fair most days, and that’s good for both the horsemen and the bettors.”