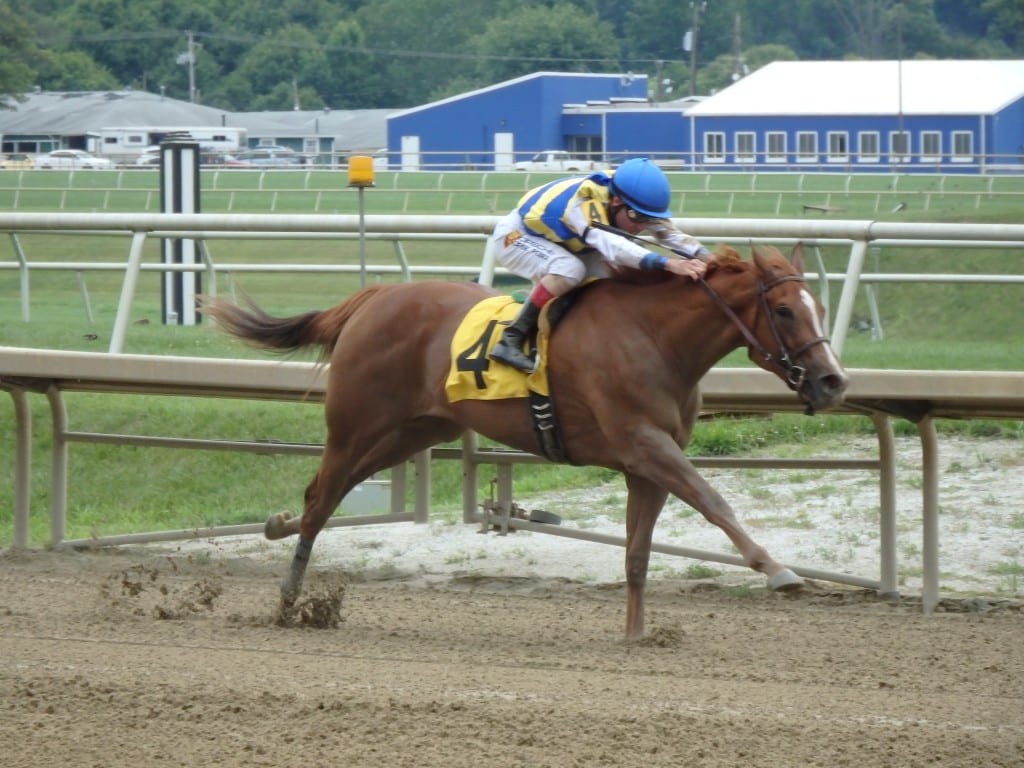 Goiaba won a maiden race at Laurel Park. Photo by The Racing Biz.

It’s not just your imagination. Arnaud Delacour really has sent out a battalion of maiden special weight winners the last year.

In fact — 16 of them prior to Sunday’s racing at Laurel Park. And, on the day after his still-promising sophomore No Dozing joined the ranks of stakes winners with a four-length score in the Concern Stakes, he added a 17th when Goiaba debuted with a 6 1/2 length score over a main track rated good.

“Everything is related to the quality of horses you have in the stall,” Delacour said following the race, “and we’re lucky enough to have nice horses.”

Goiaba, Portuguese for guava, is a case in point. A three-year-old, she is by hot sire Speightstown and out of the stakes-placed Belong to Me mare Christies Treasure. Goiaba’s half-sister by Pulpit, Sacristy, is a Grade 3 winner. Owner Bonne Chance Farm LLC paid $300,000 to acquire her at Keeneland’s September 2015 yearling sale.

“Last year she was coming along nicely and she got hurt — nothing major, just two-year-old issues,” Delacour said. “We gave her the time and she’s come back great — impressive in the morning, so I liked her.”

With Feargal Lynch in the irons, Goiaba broke well enough but quickly dropped more than a half-dozen lengths off the early pace of Resolana, who, with Victor Carrasco up, took the field through an opening quarter-mile in 22.93 seconds and a half in 46.79.

Rounding the turn, Lynch encouraged her to go on. She quickly picked up stride and began to eat into the deficit. Nearing the turn for home, Lynch tipped her out five-wide, and from there, it was all but over.

She cruised home to the easy victory. Eclipticalsrosette, never far off the pace, was second, and early pace-setter Resolana held third. Running time for the six furlongs was 1:12.10. Goiaba paid $3.20 as the 3-5 post-time favorite.

Delacour said that an allowance date was likely next for Goiaba. And now he has 17 maiden special weight winners in the last year.

The only question left is: How does he keep track of them all?

“That’s easy,” he said with a laugh, tapping the side of his head. “You always remember the good ones.”