A maiden no more, Lion of Mine gets his retirement 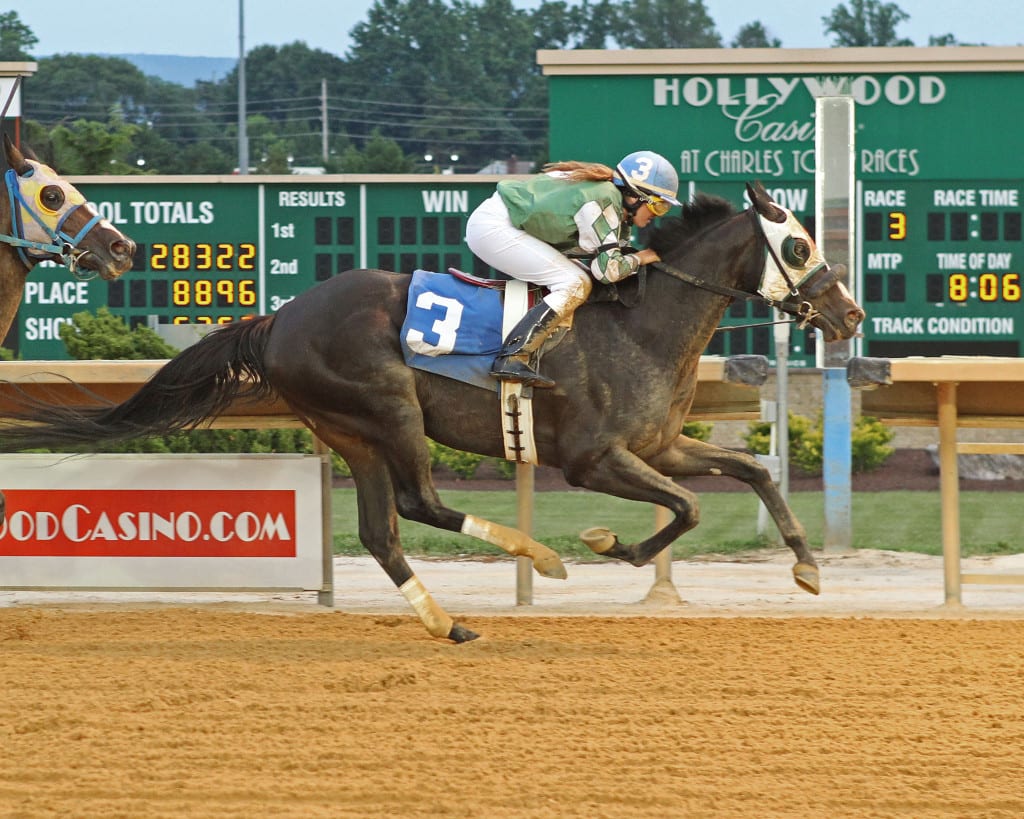 Lion of Mine and Katie Crews power to victory. Photo by Coady Phtography.

Immediately after Lion of Mine finally earned his diploma in the 47th start of his career on Thursday evening in a one-turn event for state-bred maiden $5,000 claimers at Charles Town, owner-trainer Chris Keller announced the six-year-old Lion Hearted gelding had just made the final start of his career.

Both he and jockey Katie Crews, Lion of Mine’s regular pilot, confessed that Friday would be a sad day at the barn.

Lion of Mine prevailed in the 4 1/2-furlong affair by getting the distance in 54.45 as — remarkably — the 2-1 second choice after splitting rivals Handsome Weaver and favored Early Bop inside the sixteenth pole and edging by them both for a determined score.

Typically, when horses break their maidens, their trainers are seeking their next spots, but Keller already had Lion of Mine’s next spot picked out: Ballyclare Farm in Waterford, Virginia to enjoy retirement less than 24 hours after garnering his diploma.

“To say this horse is really like a pet would be an understatement,” Keller said of Lion of Mine, who retired with a 1-5-7 slate and nearly $60,000 banked from 47 career tries. “I’ve been saying all along that as soon as he wins a race he’s going to Ballyclare. This horse has always been sound and he’s been averaging about $1500 per start, so I made money with him and he’s always enjoyed racing. He’s going to have a quiet place to go. It will be a sad day at the barn tomorrow, but it will also be a happy day. It’s only fair to allow this horse a chance to spend the rest of his life roaming freely on a farm. He wasn’t going to be able to beat non-winners of two horses anywhere.”

Jockey Katie Crews, Keller’s girlfriend, has been the primary rider for Lion of Mine during his career and she admitted an immediate fondness for the gelding. Crews said she is not looking forward to seeing an empty stall in Keller’s barn in subsequent mornings.

“This horse is the sweetest horse in the barn,” Crews said. “He really is like a pet. He’s the easiest horse to gallop in the mornings. It got a little scary down the backside [when Hello Canaan fell and impeded Mini Bolt] when that horse inside of me went down. But when he split horses at the top of the stretch he really dug in. I’m so happy for him that he finally won a race. I’m going to miss having him around the barn.”

Lion of Mine had failed to hit the board in five previous starts this year before graduating on Thursday, but last year he had finished second three times and third on five other occasions and earned nearly $28,000 in 18 starts. Prior to this year he had spent the vast majority of his career facing state-bred maiden special weight foes, finishing second at that level as recently as last December. But in more recent outings Keller concluded that the best route to earning his diploma and an eventual ticket to retirement would be through the maiden claimers.

“This horse has always been sound, but he’s been unlucky, too,” Keller said. “I thought he could have won the maiden special weight, but he’s six years old now and the maiden claimers come up a lot softer. I’m glad that he finally won a race… It’s a happy moment for me and Katie, but tomorrow is going to be a sad day for us. But it will be happy for him once he gets to the farm.”