Journey Home gets “mojo back” in Christiana win 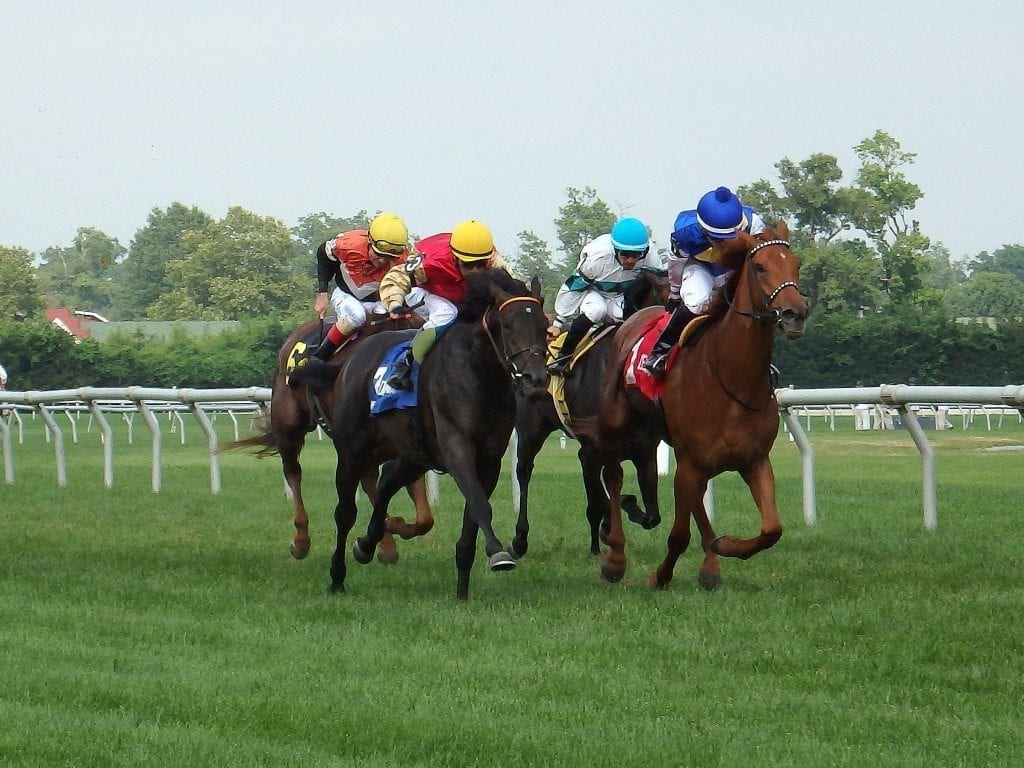 Journey Home (outside) overhauled Canny to win the Christiana Stakes. Photo by The Racing Biz.

It began with the news that Dancing Rags, a filly he trains for Chadds Ford Stable, had been scratched — mistakenly, it turned out — from the day’s featured, $50,000 Christiana Stakes.

It ended with his other entrant in that race, Journey Home, rallying along the outside to post a neck victory over a dead-game Canny.

“I mean, it’s racing, right?” Motion said after the Christiana. “You are prepared for everything, I guess.”

For Journey Home, a daughter of War Front out of the graded stakes-placed A.P. Indy mare Soul Search, the win perhaps put her back on the right path. She’d shown big promise early in her career, winning at first asking and following up with a score in the Grade 3 Jimmy Durante Stakes at Del Mar last November.

But her recent efforts were less successful. In a pair of Grade 3 tries in Kentucky — in the Appalachian, at Keeneland, and the Edgewood, at Churchill Downs — she’d finished a well-beaten eighth.

“I think I’ve run her in some pretty tough spots, and last time the ground was really soft,” Motion said, referring to the boggy conditions at Churchill Downs May 5, Kentucky Oaks day. “I wanted to get her back on track because in the mornings she acts like she’s a really nice horse.”

In the Christiana, Canny, a Michael Stidham-trained daughter of Big Brown, made all the early running and looked like the might take the field all the way. She clicked off a half-mile in 48.72 seconds and three-quarters in 1:12.83 in the 1 1/16 mile test over firm turf.

In the lane, she extended her lead to more than two lengths with just an eighth of a mile to go.

But Journey Home and jockey Edgar Prado were just getting warmed up at that point — by design, Prado said.

“It seemed like her better races were when she broke, settled down, and made a run,” he explained, and he hoped to employ the same strategy today.

While it may have looked to many observers like time was running out on Journey Home — she trailed by 4 1/2 lengths at the eighth pole — Prado said he actually had been concerned she might be moving too early.

“I was a little nervous at the three-eighths pole,” he said. “Within four or five jumps she was right there (near the lead), and she was doing it all on her own. I said let me take a little hold of her and wait a little longer.”

Journey Home now has three wins from six career starts and earnings of $119,397 for owners Sam-Son Farm. And she perhaps gives the jockey-trainer combo of Prado and Motion another good runner for the season to come. The two have won nine graded stakes together in the last five years, including two Grade 1 events with Miss Temple City.

“This filly has always acted like a really nice filly, so it was great to get her the stakes win, and to do it with Edgar is even better,” Motion said. “We’ve got the old mojo back.”