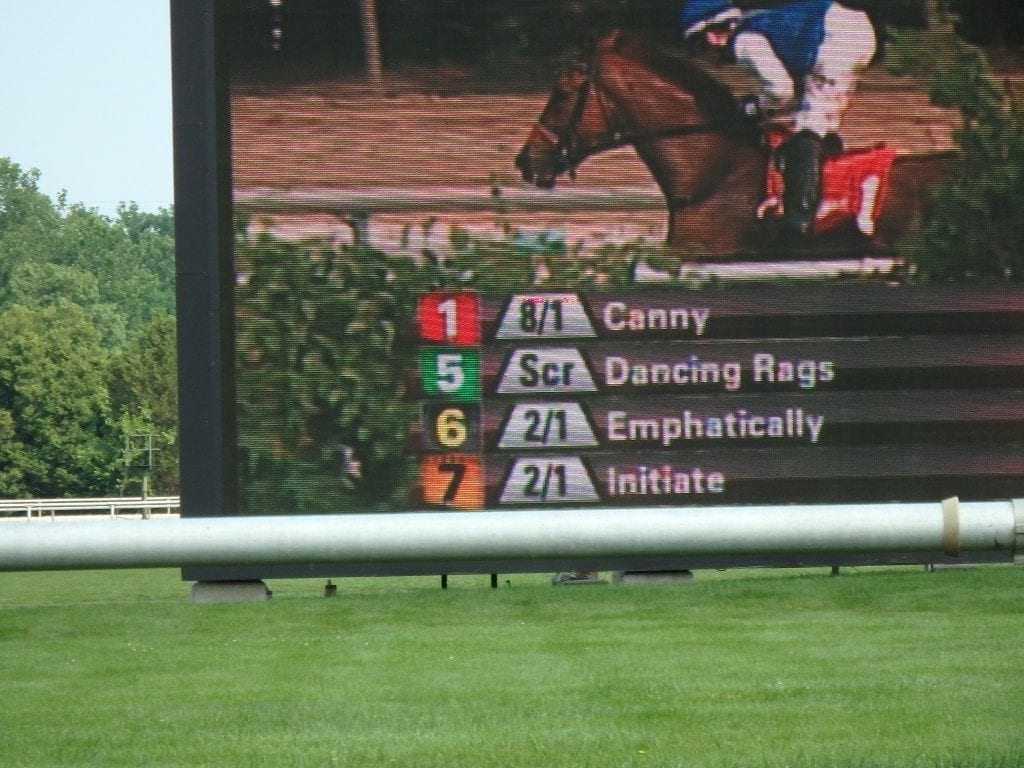 If Dancing Rags is scratched, how can she be in second? Photo by The Racing Biz.

When trainer Graham Motion arrived at Delaware Park Wednesday morning, he was informed that Dancing Rags, a horse he conditions for Chadds Ford Stable, had been scratched from the day’s featured $50,000 Christiana Stakes.

That came as news to him. He said no one in his operation had sought to scratch the horse; she was sound and ready to race.

Motion had intended to drop Dancing Rags, a three-year-old daughter of Union Rags who has struggled to find the winning range since taking last fall’s Grade 1 Alcibiades at Keeneland, out of graded company in search of an easier spot. He also hoped to try her on the grass, a surface she’d raced on only once, in a maiden sprint in her first career start.

All of which was going to be tough to accomplish if she was scratched.

In the end, it turned out to be a tale of who said what and to whom. Dancing Rags was fine, and she was permitted to run, though for purse money only, in the Christiana. She ultimately finished last after pressing the early pace.

How she’d gotten scratched in the first place, however, was the question no one could answer as the hot day wore on.

“One of the stewards thought he was taking the scratches from the racing office and thought they were taking the five-horse (Dancing Rags) out of the eighth race,” explained John Wayne, executive director of the Delaware Racing Commission.

“They later found out that was a mistake,” Wayne continued. “But since scratches are irreversible” as a wagering matter, the decision was made to allow her to run without being included in the wagering.

Further exacerbating the confusion, Motion had also entered Dancing Rags in Thursday’s $50,000 Light Hearted Stakes at Delaware, perhaps leading stewards to conclude the scratch was legit. The second entry was to have a backup plan in case the Christiana came off the turf.

When the stewards called the racing office to try to determine who had called in the scratch, Wayne said, “No one would say who called.”

There was good reason no one knew who’d called, according to Delaware Park executive director of racing John Mooney.

“That horse was not supposed to be scratched and was not scratched by our office,” he said.

If it wasn’t Motion’s people, wasn’t the stewards, and wasn’t the racing office who’d decided to scratch Dancing Rags, then who?

Part of the issue, perhaps, lies with the somewhat clunky practice used here in making scratches. According to Wayne, the racing office calls scratches into the stewards as they arrive through the morning. Of course, that might mean the stewards receiving six, ten, or even more calls on any given day.

Wayne said that what’s really supposed to happen is for scratches to be delivered to the stewards in writing. That would eliminate situations similar to this one.

“We probably should have something in writing,” he said. “I think that’s the best way to do it in future.”

After the race, meanwhile, Motion was able to adopt a philosophical tone. In the end, the horse was able to run, which took care of his owner. His other entrant in the Christiana, Journey Home, rallied late to win. Bettors who might have been inclined to back Dancing Rags were saved from themselves. The track lost a betting interest, and thus revenue in the day’s feature, but handle was up solidly from the prior Wednesday.

“I mean, it’s racing, right?” Motion asked with a chuckle. “You are prepared for everything, I guess.”