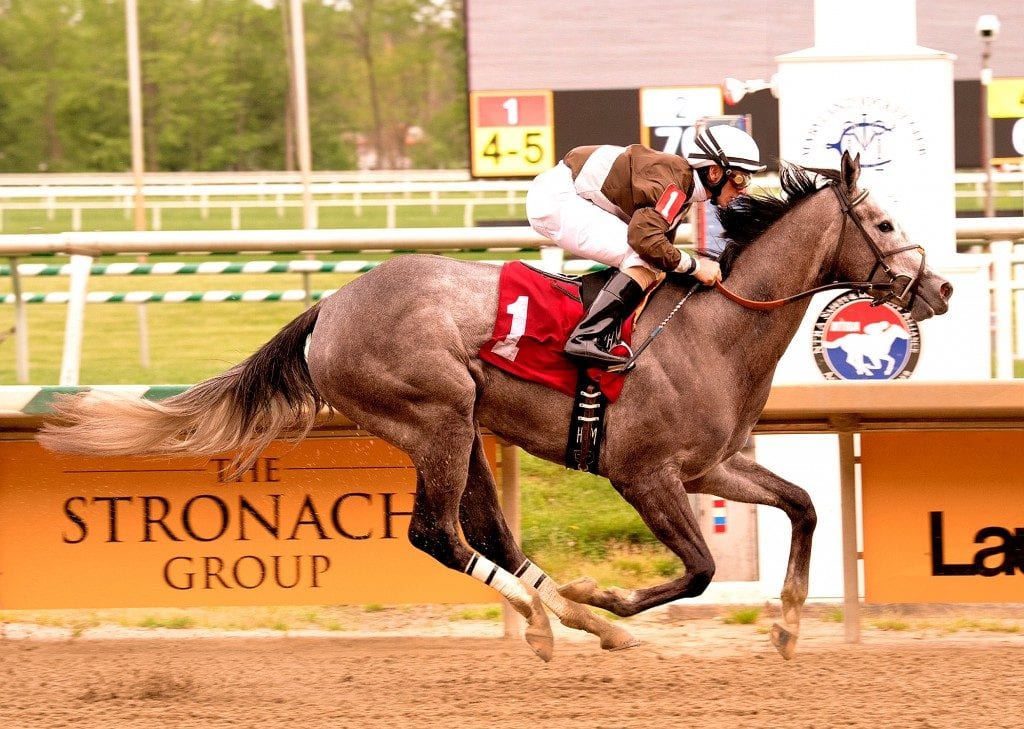 The seven-furlong Alma North for 3-year-old fillies is the first of 21 stakes worth $1.67 million to be run during Laurel’s 33-day summer stand that opened June 9 and continues through Aug. 20.

Yellow Agate, a bay daughter of Grade 1 winner Gemologist that sold for $210,000 as a yearling in the fall of 2015, overcame a tough start in her unveiling last September to rally for a half-length victory at odds of 32-1 going six furlongs at Belmont Park.

Sent off as the 6-5 favorite in her subsequent start, the one-mile Frizette (G1), Yellow Agate again came from off the pace to forge a head victory and earn automatic entry into the 1 1/16-mile Juvenile Fillies Nov. 5 at Santa Anita. There, she endured a rough trip and ultimately gave way to finish 10th in the 12-horse field.

Given plenty of time to recover from that effort by trainer Christophe Clement, Yellow Agate shows six works starting in late April at the Payson Park Training Center in Florida. She breezed three times at Saratoga Race Course in May and twice this month at Belmont, most recently going five furlongs in 1:00 June 9, fastest of 12 horses at the distance.

“She’s been training very well coming into this race,” Clement said. “Coming off a campaign last year in which she won a Grade 1 and ran in the Breeders’ Cup, this looks like a good spot to get her year started.”

Feargal Lynch replaces Manny Franco, aboard for all three starts at 2, on Yellow Agate, co-highweight at 122 pounds in a race in which weights are determined by allowances.

Hillwood Stable’s Shimmering Aspen looks to get back on the winning track in the Alma North after coming up short in her stakes debut, the 1 1/8-mile Black-Eyed Susan (G2) May 19 at historic Pimlico Race Course.

Shimmering Aspen entered the Black-Eyed Susan having won three consecutive races by 16 ¼ lengths for trainer Rodney Jenkins, all at Laurel, where she was third in her debut last summer. She went off as the favorite in the Black-Eyed Susan, taking a half-length lead into the stretch before fading to seventh.

“She came out of that race perfect. She’s sound, she ate up. She’s feeling good again,” Jenkins said. “She was a little knocked out for a couple days. She got dead tired. She had a lane where she made the lead and I said, ‘We got ‘em,’ and then she got tired. But, she tried her heart out and I‘m not disappointed.

“I was ambitious and wanted to run her,” he added. “She’d never had run around two turns and then when it rained, we had the one hole and when it rains the rail is deeper than any other place on the track. I’m not complaining, believe me. Everybody had to do the same thing.”

Regular rider Steve ‘Cowboy’ Hamilton has the call once again on Shimmering Aspen from Post 2 at 116 pounds.

Like Shimmering Aspen, Dreamchaser Thorobreds’ Astrollinthepark had a three-race win streak snapped in her last start, the six-furlong Miss Preakness (G3) May 19, where she stumbled at the start and raced wide, finishing fifth. She won the Austintown Filly Sprint April 15 at Mahoning Valley under jockey Mitchell Murrill, who returns from Post 8 for trainer Larry Jones.

Katherine Ball’s China Grove opened her sophomore season with a 1 ¼-length victory in the seven-furlong Wide Country Feb. 18 over Crabcakes, the 2016 Maryland Juvenile Filly Championship winner that is also entered in the Alma North. China Grove has run in nine stakes from 10 starts since her maiden victory last spring, while Crabcakes followed the Wide Country running second to Astrollinthepark in the Austintown Filly Sprint and eighth in the Miss Preakness.

Recent Laurel allowance winners Follow No One and Hailey’s Flip; Sine Wave, second to Grade 1 winner Sweet Loretta in the Beaumont (G3) April 9 at Keeneland; Sky Flower, a winner of her last two starts over the artificial surface at Presque Isle Downs; and Aiden’s Rag Doll complete the field.

The Alma North, a one-time staple of the Maryland State Fair Meet at Timonium, is named for the Maryland-bred mare who won 23 of 78 starts and $513,597 in purse earnings during her career.

Equibase statistics show the daughter of Northern Dancer raced in 36 consecutive stakes from Oct. 1970 to her Jan. 5, 1974 finale, never finishing worse than third. Among her 15 wins during that span were the Matchmaker Stakes (G1) and Margate (G3), Vineland (G2) and Betsy Ross (G3) handicaps in 1973.