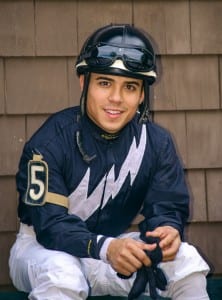 On the jockey side of the slate Brian Pedroza and red hot apprentice Jomar Torres each won 4 races to top a crowded leaderboard. Average mutuel pay off for Torres’ winners was $15.50.

One of the surprises near the top is Adamar Santos, a journeyman rider who is a Tampa Bay Downs regular. Santos, known for his strong work ethic, is off to a fast start and won with three of the nine mounts he rode. His average winning return was a whopping $21.90!

Of the locally based trainers three horsemen, Scott Lake, Tony Pecoraro and Mike Gorham have all gotten off to quick start. Each has won 3 races at the meeting. Lake and Pecoraro are both winning at a 30 percent clip, while Gorham won with three of his first five starters. It should also be noted that unlike Jorge Navarro, who won with three of four horses who were all dropping in class (average mutuel payoff: $5.40), Lake’s winners averaged $11.90, while Pecoraro horses’ average payoff was $13.10. Gorham’s winners did even better, paying an average of $22.40 for a two-buck wager.

Joe Arboritanza started 7 horses, winning two with two others finishing second. Newcomer Jeff Trosclair whose family has been racing for more than 40 years, had a winner and second from three starters and it would be wise to keep an eye on this stable.

The Delaware Park racing strip has usually been a speed favoring surface in the past. Horses in front in the stretch were, in past years, tough to run down, and while late runners did win some, they usually needed a hot early pace to help their chances.

Through the first six racing programs this year the surface has been kinder to stalker/closer types than normal. Horses racing mid pack off the pace but not too far back were able to close out of the turn in the three- to five-path and rally past the leaders in a number of races last week.

The notable exception was Saturday, June 10.  The surface for that program was decidedly speed favoring and the horses racing on the lead and on the inside portion of the track had a decided advantage through the afternoon. A graphic example of the bias helping a horse in a crucial portion of the race was the Obeah, in which Edwin Gonzalez and Princess of Snunner were able to come back again along the inside after being headed in the stretch after leading early to capture that $100,000 stake.

If you keep a daily track rating for tendencies and biases (and it’s a smart thing to do), put a circle around June 10.