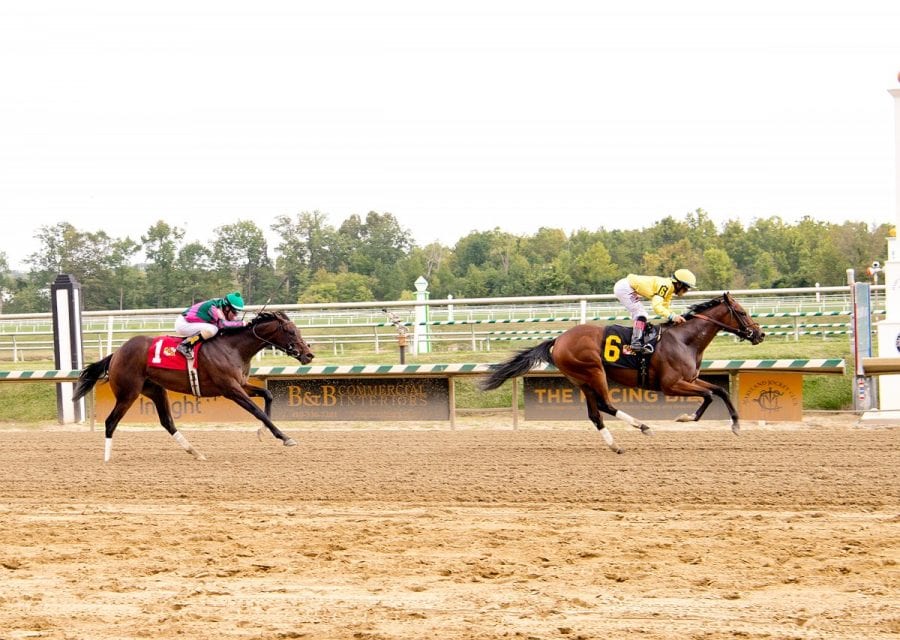 Dancing Rags will try turf for the second time in the Christiana. Photo by Jim McCue, Maryland Jockey Club.

It’s just a $50,000 stake for three-year-old fillies. But Wednesday’s Christiana Stakes on the Delaware Park turf has drawn three runners with some graded stakes success in their backgrounds — and none of them is the morning line favorite.

The 1 1/16 mile test has drawn a field of eight, with runners from some of the top barns in the region.

The 5-2 morning line favorite is Initiate. The daughter of Pioneerof the Nile is trained by Shug McGaughey and has become a different horse in her two starts on the turf. Her 2016 tries, on the dirt, were nondescript, but so far in 2017 she has a win and a near-miss second in an allowance at Belmont Park. With jockey Nik Juarez in the irons, she likely will be gunning for the lead early.

One of those horses with graded stakes experience is Emphatically, the 7-2 second choice out of the Tom Proctor barn. Two back, this daughter of Scat Daddy was a good third in the Grade 3 Providencia at Santa Anita Park, just a couple of lengths behind the undefeated, six-for-six Sircat Sally. She’ll have Feargal Lynch up.

Trainer Graham Motion sends out the other runners with graded stakes credentials. Dancing Rags (6-1) won last fall’s Grade 1 Alcibiades on the dirt at Keeneland but hasn’t finished better than sixth in three subsequent tries, all on the dirt and in graded company. Her lone turf try came in her career debut, when she finished third in a maiden sprint at Laurel Park. Angel Cruz has the mount.

Journey Home (8-1), the other Motion entrant, won the Grade 3 Jimmy Durante at Santa Anita in her second career start. But it’s been tough sledding for this daughter of War Front ever since, and in her two starts this year, she’s finished eighth both times. Edgar Prado will ride.

Others in the field include: