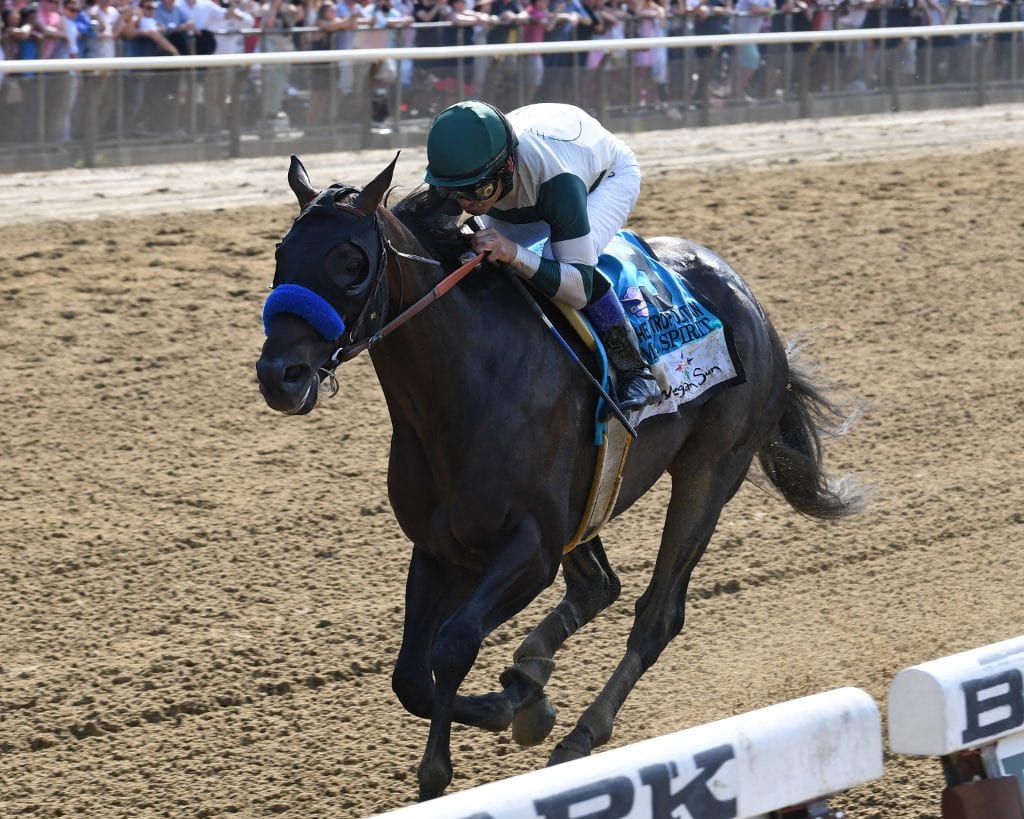 Michael Petersen’s Mor Spirit put an exclamation point on a magical afternoon for Hall of Famers Bob Baffert and Mike Smith, powering down the stretch to a dominant 6 ¼-length victory in the Grade 1, $1.2 million Mohegan Sun Metropolitan Handicap at Belmont Park.

He also upheld the honor of the Keystone State. Mor Spirit was bred in Pennsylvania by Elkstone Group LLC. The son of Eskendereya is out of the graded stakes-placed Dixie Union mare Im a Dixie Girl

The 124th running of the Met Mile for 3-year-olds and up was one of nine graded stakes, six of them Grade 1, during a 13-race program on the finale of the three-day Belmont Stakes Racing Festival highlighted by the 149th renewal of the $1.5 million Belmont Stakes presented by NYRA Bets.

As a designated “Win and You’re In” event for the Grade 1 Breeders’ Cup Dirt Mile, the Met Mile victory earned Mor Spirit an all-fees-paid trip to Del Mar on November 3 and completed a stakes sweep for Baffert. The California-based trainer was favored and won with all four horses he entered on Saturday’s card, including West Coast in the $150,000 Easy Goer, Abel Tasman in the Grade 1, $700,000 Acorn, and American Anthem in the Grade 2, $500,000 Woody Stephens.

“American Pharoah, I’ll never top that day but this day is pretty huge,” Baffert said. “It’s pretty big for us, mainly for those horses. This is on a day people are thinking about championships and you want your horses to run well. They were the favorites but the odds were against us; how can you win them all? It’s incredible and you just don’t know until the gates open. Mike Smith was huge and this is Mike Smith’s home.”

The Met Mile was the fifth stakes win on the program for the Hall of Fame jockey – four of them graded, three of those Grade 1s. In addition to the Easy Goer, Acorn and Woody Stephens, he captured the $750,000 Ogden Phipps with two-time champion filly Songbird.

It was the second career Met Mile for Smith, whose two Eclipse Awards in 1993 and 1994 came when he was based in New York. His previous triumph came in 1994 with Hall of Famer Holy Bull, who died Wednesday at the age of 26 in Lexington, Kentucky.

“I’m very blessed to ride for guys like Bob,” Smith said. “I’m not riding a lot right other than today but we’re riding some super horses and these kind of horses, you use your head a little bit and you point them in the right direction and they get it done.

As expected, Sharp Azteca broke running from post 5 and was in front through a quarter-mile in 23.20 seconds and a half in 46.09, with Smith and Mor Spirit tracking on his right hip, never more than a length away. Smith gave Mor Spirit his cue around the turn and they met no resistance to take the lead after six furlongs in 1:10.10, steadily pulling away through the stretch to win in 1:33.17 over a fast main track.

“That was pretty impressive, I have to admit. All my horses were impressive today, but this horse the way he ran today, how fast he ran – it was incredible,” Baffert said. “Turning for home I felt pretty good about it because it was a :46 half and that was manageable, especially him with a horse in front. I could tell Mike was just sitting.”