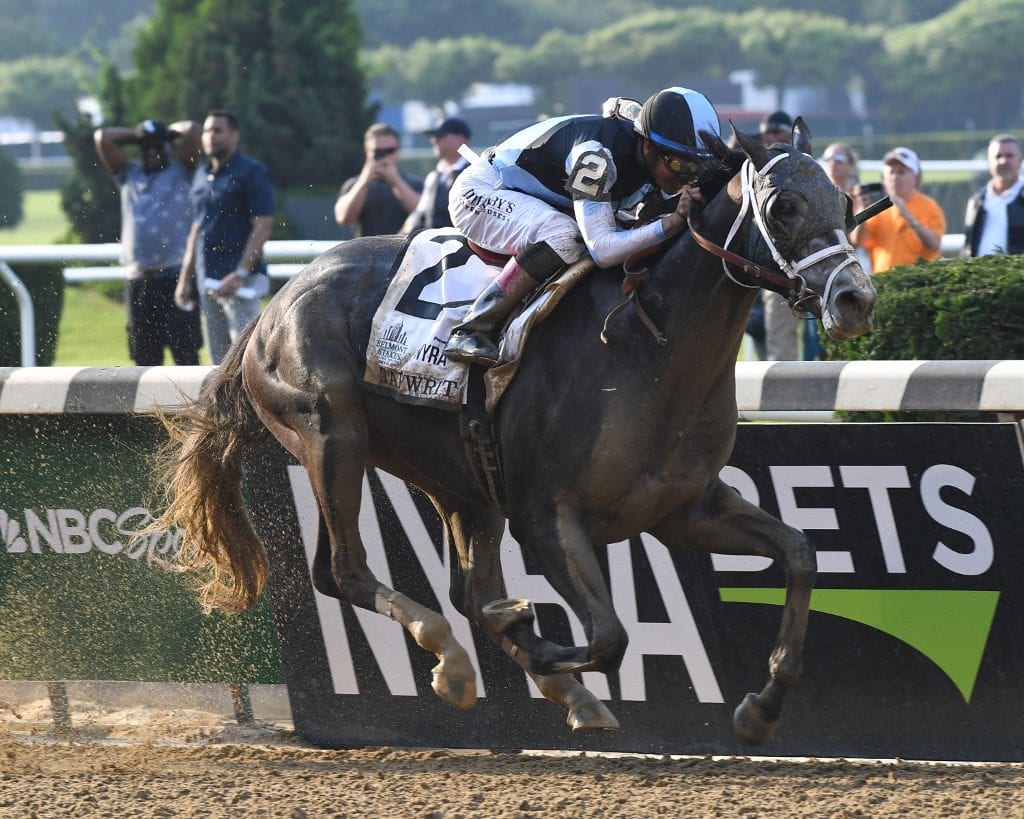 Tapwrit handed trainer Todd Pletcher a third career victory in the Grade 1, $1.5 million Belmont Stakes presented by NYRA Bets, taking aim on front-running favorite Irish War Cry at the top of the stretch and then surging into the lead in the final yards to win Saturday’s 149th edition of the ‘Test of the Champion’ at Belmont Park by two lengths.

The runner-up effort granted a measure of redemption to Irish War Cry, who’d finished a disappointing tenth in the Kentucky Derby. But in the end, he didn’t have quite enough to fend off the late run of his rival.

Expertly handled by Jose Ortiz, whose older brother, Irad Ortiz, Jr. won last year’s Belmont aboard Creator, Tapwrit enjoyed a ground-saving trip in third as jockey Rajiv Maragh sent Irish War Cry through moderate fractions of 23.88 seconds for the opening quarter-mile, with the half going in 48.66, three quarters in 1:14.01, a mile in 1:38.95 and 1 ¼ miles in 2:04.10.

Irish War Cry appeared to have the race in hand turning for home and held a length advantage over Tapwrit in upper stretch, but under left-handed urging from Ortiz, Tapwrit kicked into high gear to wrest control with 100 yards left and go on to victory.

“Tapwrit was getting a beautiful trip,” said Pletcher. “It was everything we talked about in the paddock before the race. We were hoping he had enough when it came to crunch time. It looked like Irish War Cry still had a little something left, but the last sixteenth, he dug down deep.”

It was the second victory in five starts this year for the gray son of Tapit, who took the Grade 2 Tampa Bay Derby in March in impressive fashion but subsequently finished fifth in the Grade 2 Blue Grass and then sixth in the Grade 1 Kentucky Derby. Pletcher held the colt out of the Preakness, the second leg of racing’s Triple Crown, a move that resulted in Tapwrit becoming the fourth Belmont winner in the past six years to take that path.

“[Belmont Park] is our home base and I think that’s always an advantage,” said Pletcher, who won the Belmont in 2007 with the filly Rags to Riches and in 2013 with Palace Malice, as well as getting narrowly beaten with Destin in last year’s edition. “We felt like with the five weeks in between, and with the way this horse had trained, that he had a legitimate chance.”

Irish War Cry held on to finish 5 ¾ lengths head of Patch – also trained by Pletcher – with Gormley along for fourth.

“It actually wasn’t our plan to be on the lead,” said Graham Motion, trainer of the beaten favorite. “We kind of hoped that somebody else would go for it, but he had to go to Plan B and Rajiv did a great job. At the eighth pole I thought we might be home free, but it’s the Belmont. It’s a tough race.”

“It’s an unbelievable feeling that I can’t explain,” said Ortiz, the leading rider on the New York Racing Association circuit in 2016. “The distance, I was sure he could handle it. It was a great training job by Todd. I always liked him and we always had a lot of faith in him. Today he showed up. I’m very happy.”

Completing the order of finish were were Senior Investment, Twisted Tom, Looking At Lee – the only horse to have competed in all three legs of racing’s Triple Crown – Meantime, J Boys Echo, Multiplier, and Hollywood Handsome, who was eased.

Epicharis was scratched Saturday morning due to continuing inflammation in his right front hoof.