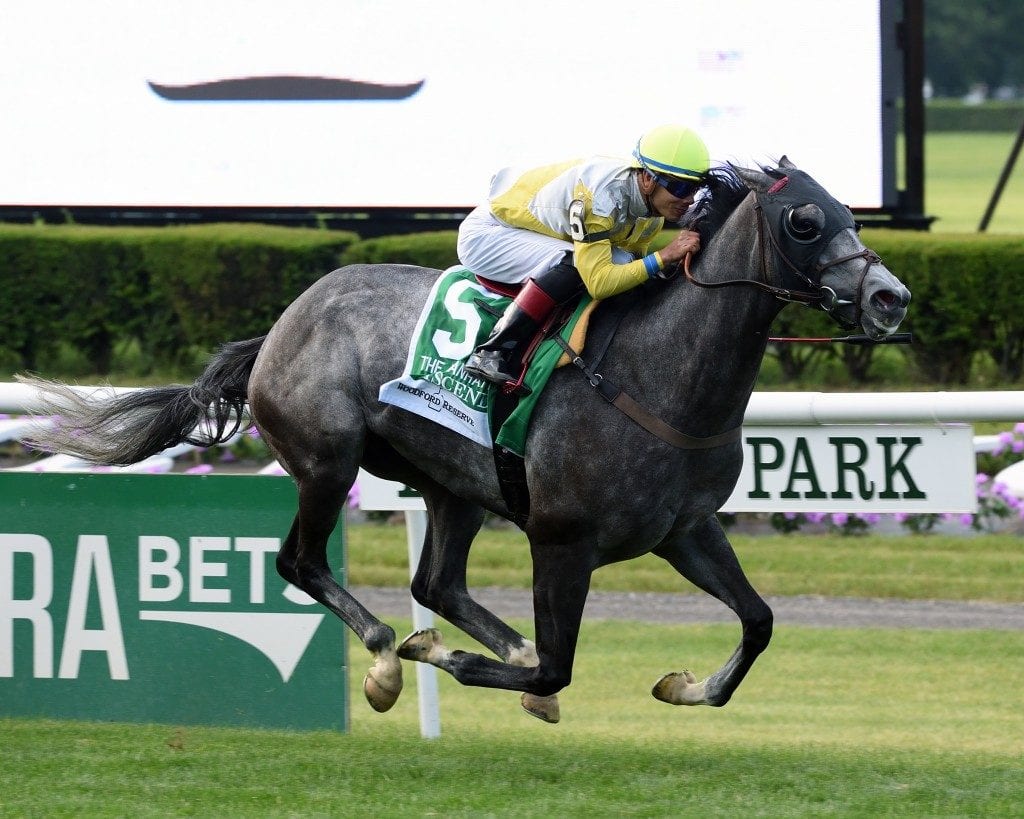 Isabelle de Tomaso’s homebred Irish War Cry, a gutsy second as the favorite in Saturday’s Belmont Stakes, exited the race in good order and will be pointed to the Grade 1 Haskell Invitational July 30 at Monmouth Park.

Graham Motion checked in on the multiple Grade 2 winner early Sunday morning before heading back to Fair Hill Training Center in Elkton, Maryland, where the trainer is based. Irish War Cry will leave New York for Fair Hill on Monday.

“I wanted to just give him a day to get over it,” Motion said. “He’ll leave tomorrow morning and head back to Fair Hill, then we can get him back out in his round pen and kind of rest him up and get him ready for the Haskell. That’s definitely what we’d like to do, so fingers crossed, that’s where we’ll be.”

Motion was proud of the effort put in by Irish War Cry in the 1 ½-mile Belmont, the last and longest leg of the Triple Crown. He led the entire way, taking a one-length lead into the stretch before being overtaken past the sixteenth pole and wound up beaten two lengths, but nearly six ahead of third-place finisher Patch.

In doing so, Irish War Cry matched the finish of his Hall of Fame sire, Curlin, who was second by a nose to the filly Rags to Riches in the 2007 Belmont.

Irish War Cry entered the Belmont with stakes wins in the Marylander for 2-year-olds at Laurel Park and the Grade 2 Holy Bull at Gulfstream Park and Grade 2 Wood Memorial at Aqueduct from five previous starts. He was 10th in the Kentucky Derby and inherited the favorite’s role Saturday following the defection of 2016 2-year-old champion Classic Empire with a foot abscess on the morning entries were taken.

“I’m pretty happy with him. He was a little stirred up last night after the race, I think just from the commotion and having a hard race,” Motion said. “It took him a while to cool out. I was actually pleasantly surprised that he ate up last night. I wouldn’t have expected him to. He seemed good.

“I think he ran the hardest race he’s run,” he added. “When he won those races, he kind of won for fun except perhaps the race at Laurel where he had to run really hard. The Holy Bull and the Wood were relatively comfortable wins for him. Yesterday he really had to lay it down and I was very proud of him.”

Motion was also proud of Stone Farm and Madaket Stables’ Ascend, who upset the Grade 1, $1 million Woodford Reserve Manhattan by 1 ¼ lengths at odds of 27-1 one race prior to the Belmont.

It was the third straight win and second consecutive stakes victory in his graded debut for Ascend, a 5-year-old gelding that captured the Henry S. Clark April 22 at Laurel in his season opener.

“That was really exciting. He’s a lovely horse,” Motion said. “That was very rewarding, I must say, especially for the connections.”

The 1 ¼-mile Arlington Million on August 12 is a possibility for Ascend’s next start, Motion said.

“I hadn’t looked beyond this race so I need some time to think about it. I don’t know what his best distance is going to be,” Motion said. “My inclination is that he’s more of a mile and a quarter horse than a mile and a half horse, which is going to make it a little tricky, but certainly a race like the Arlington Million would have to be on the radar.

“I think he’s really improved this year and grown up a lot,” he added. “He’s just got a really cool disposition and takes everything in his stride. He’s just very talented to boot. I think the Arlington Million is going to end up being our summer goal. That’s what would make sense to me, anyway.”

On Friday, the Motion-trained Quidura ran second by a length to Hawksmoor in the Grade 2, $500,000 New York, while Sagamore Farm’s He Hate Me was an impressive winner of the $150,000 Tremont. All three horses are stabled at Fair Hill; Hawksmoor with Arnaud Delacour and He Hate Me with Horacio DePaz.

“What a weekend for Maryland and Fair Hill horses and Sagamore,” Motion said. “It’s amazing really.”