Xavier Perez aiming to get back to top of game 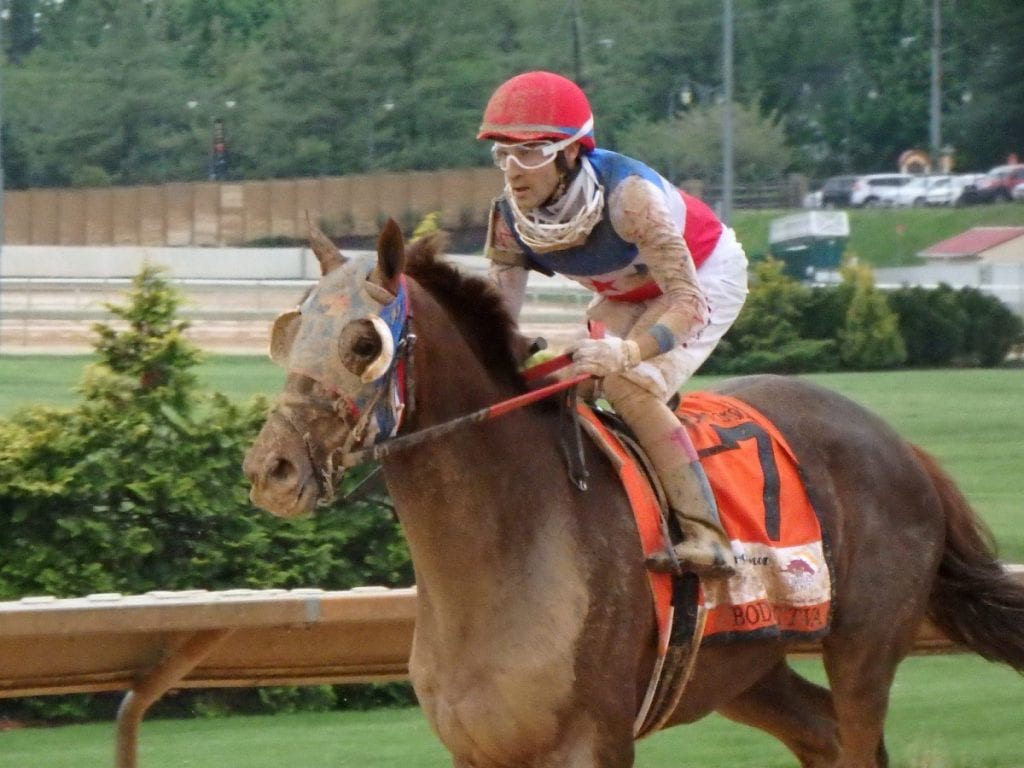 Comebacking jockey Xavier Perez is hoping to spring an upset aboard Bodhisattva. Photo by The Racing Biz.

Back in 2013, jockey Xavier Perez had it going on. The 29-year-old native of Puerto Rico won a career-best 133 races that year, and his mounts earned more than $3.8 million.

And it was the year he teamed up with Ollie Figgins trainee Dance to Bristol to run off a seven-race winning streak, culminating in a victory in the Grade 1 Ballerina at Saratoga, followed by a sixth-place finish in the Breeders’ Cup Filly and Mare Sprint. The Susan Wantz-owned daughter of Speightstown was one of three finalists for the Eclipse Award for champion filly or mare sprinter that season.

But Perez saw a precipitous decline in his wins and earnings over the next three years and he fell out of favor with agent J.D. Brown. Perez won 98 of 822 mounts and earned $3.1 million in 2014, but he recorded only 67 winners and $2.1 million banked from 711 mounts the following year and then plummeted to only 22 wins and $740,000 banked from 409 mounts in 2016. He has won three times from 76 mounts this year, but he has also been reunited with Brown who admitted to taking the rider back reluctantly this spring.        ”

“What I saw from him when we parted was a lack of hunger and desire,” said Brown, who reunited with Perez in the weeks leading up to this year’s Grade 2 Charles Town Classic, in which Perez rode Bodhisattva to a fourth-place finish. “He really had lost his hunger. But I think over the last year or so he’s really matured. When he came back to me, he seemed more mature and I could sense he was hungry again. He would rather win than finish second, he would rather finish second than third and he would rather get third than fourth. He’s regained that passion for winning.”

“We both agreed to take a break from racing until I could get my focus back,” Perez added, noting that he also had been having trouble with his weight.

His ride in the Charles Town Classic was one sign that the native of Puerto Rico is finding his way forward. That he has three mounts in stakes on Friday at Pimlico is another.

While much of the attention for Friday’s Grade 3, $300,000 Pimlico Special will be focused on Shaman Ghost, hero of the recent, Grade I, $750,000 Santa Anita Handicap, trainer Jose Corrales and Perez are hoping to combine for some unexpected magic with Bodhisattva, who shares some common human lineage with the favorite.

Although Bodhisattva will head into the latest renewal of the Pimlico Special as a genuine outsider – his fourth-place finish in the Charles Town Classic came at odds of 79-1, and he’s 30-1 on the morning line – the five-year-old Student Council horse already boasts two wins in three tries over the strip and his lone setback, a last-place effort in the 2015 Preakness Stakes won by Triple Crown hero American Pharoah, certainly cannot be held against him. His price will likely hover close to triple-digits again on Friday, considering that Shaman Ghost won the Grade I Santa Anita Handicap as the favorite in his most recent outing after running second to Arrogate in the inaugural edition of the Grade I, $12 million Pegasus World Cup at Gulfstream Park.

In addition to Shaman Ghost, 4-5 on the morning line, defending champion Noble Bird, the easy winner of last year’s renewal, will garner some support, as will Watershed and Eagle, one-two finishers in the Grade III Ben Ali Stakes at Keeneland in their most recent outing. But competing against them hardly seems to phase Corrales.

“Running in a horse race like this is a lot like hitting the lottery,” Corrales said. “It doesn’t matter if you buy one ticket or one hundred tickets, it only takes one ticket to win the lottery. This horse bounced back from that race at Charles Town really well. He’s been doing really good. I know Shaman Ghost is a real nice horse and there are some other good ones in there, but my horse can beat anybody on any day that he decides to run his race. I’m hoping that he can do that on Friday.”

While Bodhisattva and Shaman Ghost might appear on opposite ends of the spectrum, they actually have something in common in regards to their human connections. Shaman Ghost, a five-year-year Ghostzapper stallion out of a Gilded Time mare, was bred by Adena Springs and owned by Stronach Stables, both of which belong to Frank Stronach. Bodhisattva was bred by Stronach’s son, Andy Stronach and Corrales would enjoy nothing more than to see the two Stronach-bred runners run one-two in the Pimlico Special.

“That’s the hope,” Corrales said of Shaman Ghost and Bodhisattva completing the Pimlico Special exacta. “In fact, I wouldn’t be too sad if we win it and he runs second. I think it would be great for the Stronach family to see their horses finish one-two in the Pimlico Special. I hope my horse runs well enough to stay close to him and I wouldn’t be too disappointed if we did end up reversing that order of finish.”

So far in 2017, Bodhisattva has first- and second-place finishes in a pair of stakes races, to go with his good try at Charles Town last month.

“The horse is coming into the race great and Xavier rode him perfect for me last start and I think he fits him well,” Corrales said. “I don’t want to make any predictions because there are some good horses in that race and Shaman Ghost is definitely the horse to beat. But I think it’s just like hitting the lottery – it only takes one ticket to win the whole prize.”

“I’m looking forward to seeing how [Perez] does on [Bodhisattva] in the Pimlico Special,” Brown said. “Xavier is showing me that he wants to work hard again. He wants to be out there and he wants to succeed. He’s going to ride well no matter which horse and no matter what the odds. He doesn’t need me to push him – he’s motivated to be back out there and doing well.”
Perez agreed that Bodhisattva has been training well, adding, “I got on him the other day and he was just dragging me around.”

Of course, that won’t be his only stakes mount on the weekend. He’ll also have M C Squared, for Figgins, in the Jim McKay Turf Sprint and Priss in the Old Hilltop for Jason McCutchen. Both are longshots.

And if one of those runners should happen to win?

“It would put me back where I was,” Perez said. “It would build up all my confidence that I’m completely back.”