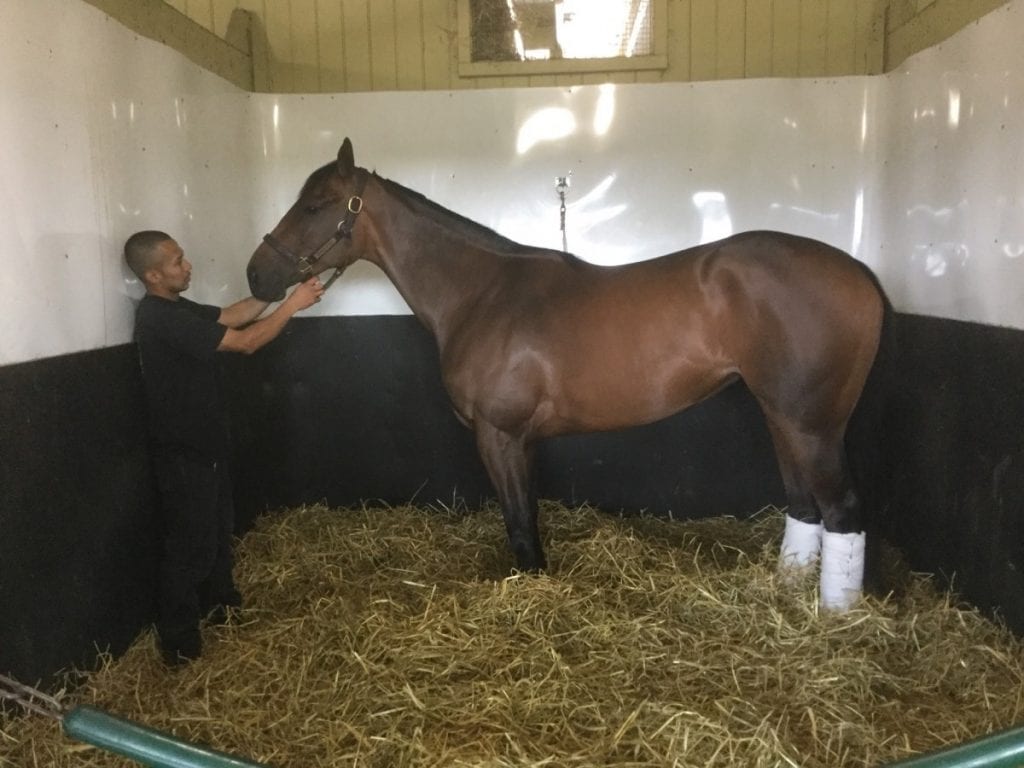 Foxcroft Farm’s Pat Schuler is experiencing the ups and downs of horse of racing all at once. Her mare, Malibu Moon Dance, has foaled Dance Queen, a three-year old filly that has never lost a race and Lunar Boogie, a four-year-old colt that has never run in one.

While Dance Queen was getting in her last gallops at New York’s Belmont racetrack for Friday’s $100,000 Hilltop on the Pimlico turf, Lunar Boogie was relaxing in his rural central Virginia stall on a warming spring day, needing little encouragement to come around for a picture or two.

Six years ago, Patricia Schuler bought Malibu Moon Dance who was in foal to Unbridled’s Song. Shortly after the foaling of Lunar Boogie, Schuler was nudged by Debbie Easter to send her mare from Foxcroft Farm in eastern Albemarle County to a Kentucky sire, To Honor and Serve. The resulting filly was named Dance Queen.

This past winter the brother and sister were reunited for about 60 days in Patrick Nuesch’s barn at Braeburn farm for the winter. Nuesch had previously worked with the young dark bay filly for a half-year when she was a yearling.

“She was just as cool as she could be, a laid-back, very intelligent horse,” recalls Nuesch about breaking Dance Queen. “It helps them when they are racing too, having that temperament.”

Dance Queen won her first two starts, both at a mile on the turf for trainer Thomas Bush. The last one, at Aqueduct some 30 days ago, was better than her first one at Gulfstream some 30 days before that.

“If they’re turf, it’s easy effort to get them fit well enough,” Bush said about starting his filly at a mile. “We still have plenty to prove. This race is much deeper race than what she’s run with. We’ll find out. That’s why you race them.”

Schuler is already pleased about her homebred.

“We’ve never had this happen before, it’s kind of weird,” observed Schuler about having a horse win their first two starts.

It’s not that Schuler hasn’t enjoyed success before. While Dance Queen was learning the ways of being a racehorse at Braeburn, she would walk the shedrow in front of So Lonesome enjoying the morning sunlight. Schuler’s So Lonesome won two races at Saratoga, including the 2014 Albany Stakes over 2015 Breeder’s Cup Classic runner-up Effinex, before being retired after not racing for two years.

According to Bush, Dance Queen doesn’t appear to have changed much since her Braeburn days.

“She’s pretty uncomplicated,” he remarked. “She’s a good eater. She’s keeps her flesh well. I wish I had more like her.”

That could happen. On the other side of that same Braeburn shedrow is Twirlin Curlin, a two-year old filly out of Malibu Moon Dance sired by Curlin, the colt that won the Preakness 10 years ago. Alongside her is two-year old daughter of The Factor that Schuler purchased and named Madgirl, after her granddaughter.

Just before Friday’s 8th race at Pimlico, trainer Thomas Bush will give a leg up to Luis Saez, Dance Queen’s third different jockey in as many starts. Bush’s instructions won’t be much of a secret. Inside of the twelve other three-year old fillies in the race, Dance Queen (8-1) will have little choice other than to seek another pacesetting score as she had in her first two.

“We’ll be more committed to the lead than we’d like to be,” said Bush. “It’s likely we’ll try not to give up the rail.”

More sun and less rain for the duration of the week should only help Dance Queen’s chances to further her short-termed perfection. A little less perfect has been Lunar Boogie, though even he is not much of a test to Nuesch’s bottomless patience. His gradual improvement on an ankle issue may soon be enough to generate a start at the racetrack.

Though not looking forward to the drive north to Baltimore, Schuler is excited about the chances of her filly to open her racing career with a winning triple concluding with a stakes win on Preakness weekend in Friday’s eighth race.

Cool. Laid-back. Intelligent. And undefeated? That sounds like a winning combination for Dance Queen.