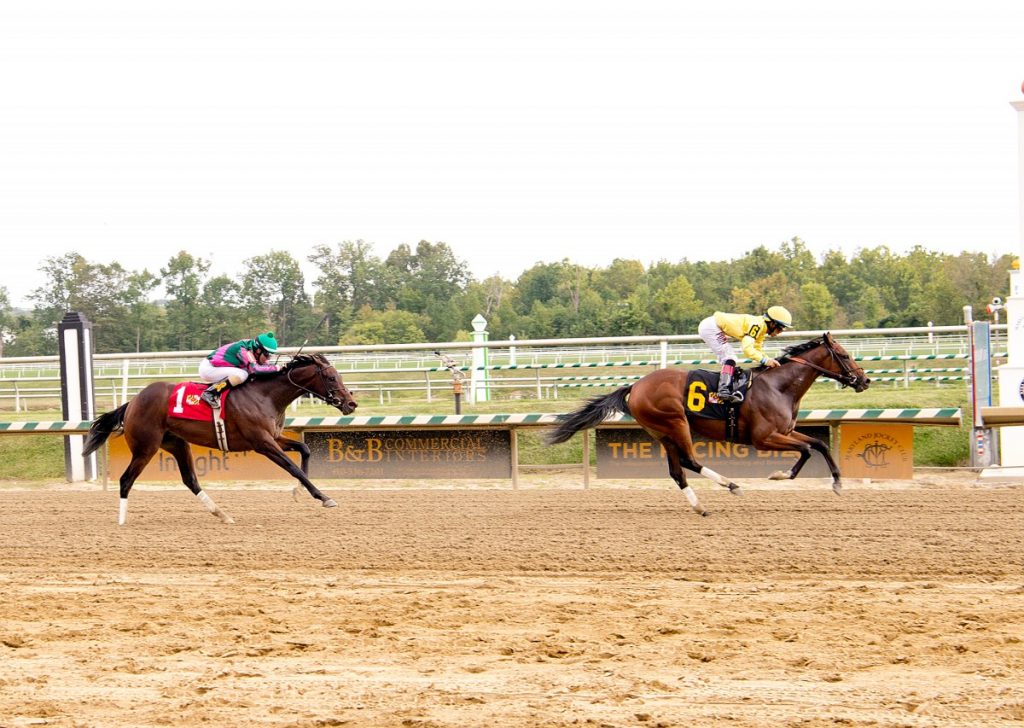 by Doug McCoy On August 8th Dancing Rags made her first start in a maiden race at Laurel. Four months after finishing third in that debut the Union Rags filly was in the Breeders’ Cup Juvenile at Santa Anita. It was a whirlwind period for the Union Rags filly, but it was a departure from the juvenile schedule trainer Graham Motion had originally planned for his young runner. Dancing Rags is slated to run Friday in the Grade 2, $250,000 Black-Eyed Susan at Pimlico, and Motion is hoping an older, more mature Dancing Rags will take her first step forward as a 3-year-old in the nine furlong fixture. She is 8-1 on the morning line.

Motion admitted the filly’s surprising victory last fall in the Grade 1 Alcibiades at Keeneland prompted some major changes in his original plans for the filly.

“After she broke her maiden at Laurel, we felt she was a filly of some substance but she was still young and developing,” the horseman explained. “We were going to Keeneland so we thought we would run her in the Alcibiades, thinking if she ran well she might be able to earn some black type in a Grade 1 race, something that would enhance her value later on as a broodmare. Then that would complete her 2-year-old season, she’d go south to Florida and be given some time to mature and grow. Then we’d begin pointing her for races in the spring.”

As luck would have it, Dancing Rags would do more than earn black type in the Alcibiades; she ran the race of her young career to upset a strong field that included eventual Kentucky Oaks runner up Daddys Lil Darling. It was her first start with Lasix.

While her connections were understandably thrilled with the win, the victory also brought about a major change in her future plans. Dancing Rags, bred in Maryland by David DiPietro and owned by Chadds Ford Stable, had hit the big time.

“The Alcibiades was a ‘win and you’re in’ race which meant the winner earned an automatic starting spot in the Breeders’ Cup Juvenile Fillies Stake,” Motion pointed out, “so instead of stopping on her, circumstances warranted we go to California and run in the big race.”

Dancing Rags faded to eighth in the B.C. Juvenile Fillies after holding a contending position to the stretch and then shipped to Florida soon after for some down time. Motion said the filly has filled out nicely and continued to mature during the winter – and surprised the horseman when she returned to serious training.

“She actually trained better this winter than we expected,” Motion revealed, “and she seemed more focused during training. I’m cautiously optimistic she’s going to continue to move forward as a 3-year-old.”

Dancing Rags made her 3-year-old debut in the seven-furlong, Grade 3 Beaumont Stakes at Keeneland. But after being bumped leaving the gate, she turned in a somewhat lackluster effort, winding up a well beaten sixth behind winner Sweet Loretta. Motion said he takes partial responsibility for his filly’s poor showing,

“We had been thinking of the Ashland but felt she wasn’t quite fit enough for that race but in retrospect the Beaumont was just too short for her,” Motion said. “She never was comfortable and you didn’t see anywhere close to the real Dancing Rags that day.”

The filly has come back to train well at Fair Hill, and a sharp five-furlong work last Friday prompted him to enter Dancing Rags in the Black-Eyed Susan rather than the $100,000 Hilltop Stakes, to which she was also nominated.

“Her work Friday helped me make up my mind,” Motion said. “And the Hilltop’s on the turf and I felt she’d be better suited sticking to the dirt.”

There will also be a rider change Friday with Trevor McCarthy replacing Angel Cruz aboard Dancing Rags.

“Trevor rides quite a few of our horses and we have a good line of communication.” Motion pointed out. “He knows what I expect and he’s also been riding at Pimlico and Laurel for years so he knows how to read those tracks. There’s enough speed in the race that we should be able to sit off the pace till the time is right. She’s back at two turns, and if she runs the way she’s been training, I think she’ll give a good account of herself.”