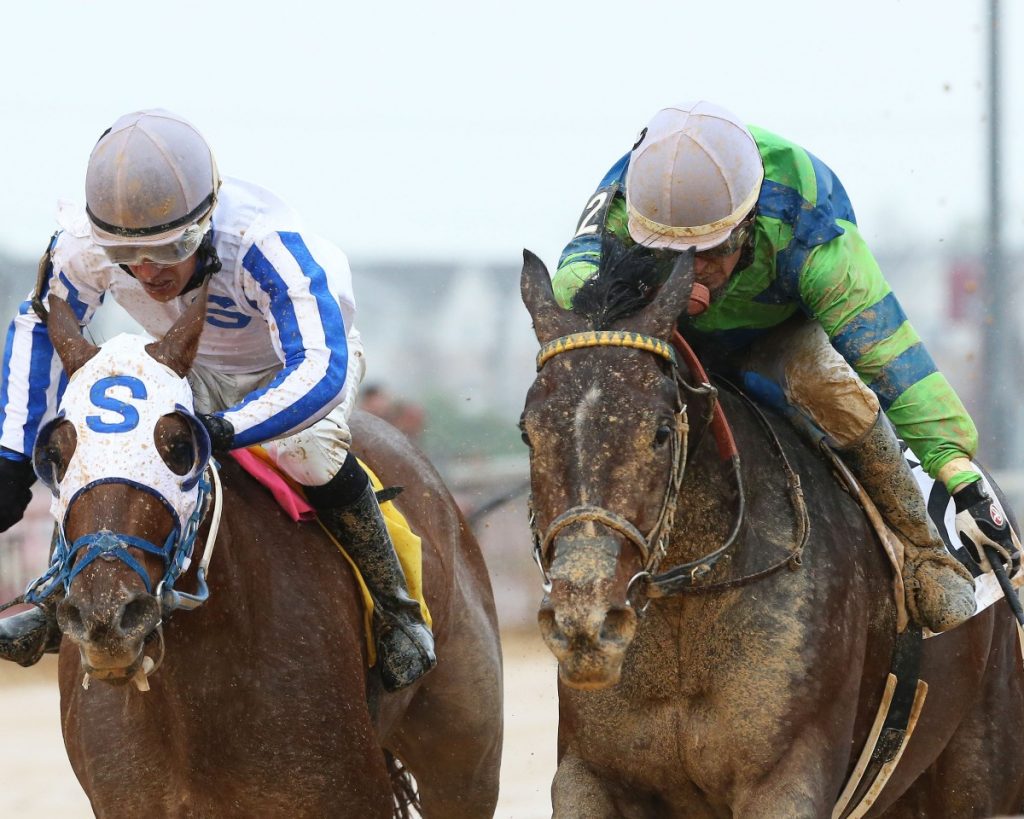 Hot Mic (inside) prevailed in the Coin Collector Stakes. Photo by Coady Photography.

Roughly one year after announcing his retirement from riding after suffering a broken leg in a spill at Charles Town, jockey Matt McGowan found himself galloping horses in the morning for trainer Ollie Figgins, III, and suddenly realized that he was only one step away from returning to the irons on a regular basis – losing 15 pounds.

McGowan, who is approaching 900 wins and 10,000 mounts in a career that began in 2001 but began to take off the following season, has always felt comfortable riding at 115 pounds. But after one year of recovering from his serious leg injury and gradually returning to the saddle as an exercise rider, McGowan weighed 130 pounds. His morning gallops for runners trained by Figgins rekindled his passion for riding again, and by the spring of 2016 he realized what he wanted to do.

“I was so grateful for Ollie to give me a chance to come work for him in the mornings,” McGowan said. “By the time I came back I was around 129, 130 pounds and so I realized that I needed to lose 12-15 pounds to reach my riding weight. The weight started to come off quickly at first, but the last four or five pounds were tough. I just had to watch my calorie and carb intake keep exercising and then after a while I was under 120 and I knew it was going to happen. My first start back, riding a horse for Chris Keller, I felt right at home when the gates opener. It was just like riding a bike again.”

McGowan piloted 114 winners in 2002 and he eclipsed the 100-win plateau again in 2010, when his mounts earned just shy of $2 million, a personal best. In fact, from 2009-2014 McGowan’s mounts earned at least $1 million each season and during that time he became the regular pilot of Down Town Allen, the late, durable state-bred mare owned, bred and trained by John A. Casey, previously of Coin Collector fame. McGowan also won races aboard Russell Road, another durable West Virginia-bred who ended his career with over $2 million banked, and Red Hot Diva, a Figgins trainee.

“There was just something about the chemistry that me and Down Town Allen had,” McGowan, 37, said, having piloted the Casey homebred to 21 wins and roughly 90 percent of her career earnings. “Each time I climbed aboard her, she knew what to expect from me and I knew what to expect from her. It didn’t matter if we were going 4 1/2 furlongs or seven furlongs, we just had complete confidence in one another. I rode Russell Road a few times, but I never got along with any horse like I did with Down Town Allen. She was just special to me and always will be.” 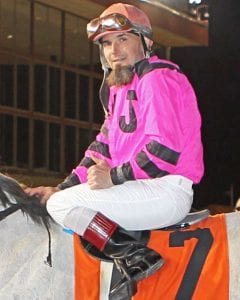 McGowan has ridden other horses for Casey in his return, and the trainer praised the rider for his character and personality as much as his skills in the irons. Casey said the two have been friends for a long time.

“Matt and I go back a long ways,” Casey said. “He’s a great friend. I’m glad that he came back. We had a lot of good times when Down Town Allen was running up here and winning stakes, but even when he’s not riding for me, I have a lot of respect for Matt. We’ve done a lot of things together outside the track. I know it was tough on him sitting out a while, but he really wanted to come back. I don’t think he’s lost anything. He still looks confident on a horse and he’s out there to get the most out of a horse that he can, whether it’s for me or anyone else that puts him up.”

McGowan notched his first career stakes victory aboard Sweet Music for owner-breeder Naomi Long, also his mother-in-law, and last month he guided Hot Mic to a 21-1 upset in the Coin Collector Stakes for state-bred three-year-olds for Figgins and Long. Hot Mic had won his career debut just three weeks earlier, then overhauled the speedy filly Cuttin Edge Tech in the lane to score between horses in an emotional win for both trainer and rider.

“Winning that race for Ollie and my mother-in-law, Naomi, meant that my career had come full circle,” McGowan said. “I know Ollie has always been fond of that horse and he always showed me some ability in the mornings. I think his best races are going to be longer. I like the way he finishes and I can’t wait to see how he does stretching out to two turns here. But that race meant a lot to me. I’ve always been grateful that Ollie and Naomi had faith in my ability to ride and that win truly meant I had come full circle.”

Figgins had grown attached to Hot Mic in the weeks leading up to his career debut, and he stood next to the horse in the winner’s circle with tears visibly welling up in his eyes. Figgins had also welcomed McGowan back to the races with open arms and the jockey’s morning gallops aboard Hot Mic were equally as important to the rider as they were to the juvenile colt, gelded in the weeks between his debut score and his stakes victory.

“Matt has always been an aggressive rider and I don’t think the time away from the races affected him at all,” Figgins said. “He’s still looking to put your horse in the race early. I thought he rode Hot Mic perfectly the first start and then he rode another great race on him in the Coin Collector. He’s always done well for me. I’ve always been fond of Hot Mic. He’s such a neat little horse. I’m glad that his first stakes win was Matt’s first stakes win back. I’m hoping they win a few more together.”

Though both Figgins and McGowan seemed more eager to see how Hot Mic, a son of Fiber Sonde, would fare going two turns, you have to run in the races the track uses, which means that he will race on Wednesday, May 17 in a 4 1/2 furlong sprint.

Figgins said the Long homebred would get some time off after the race to begin preparing for the state-bred stakes this summer and fall, which means that if he and McGowan are to win a few more stakes together, they’ll have to wait.