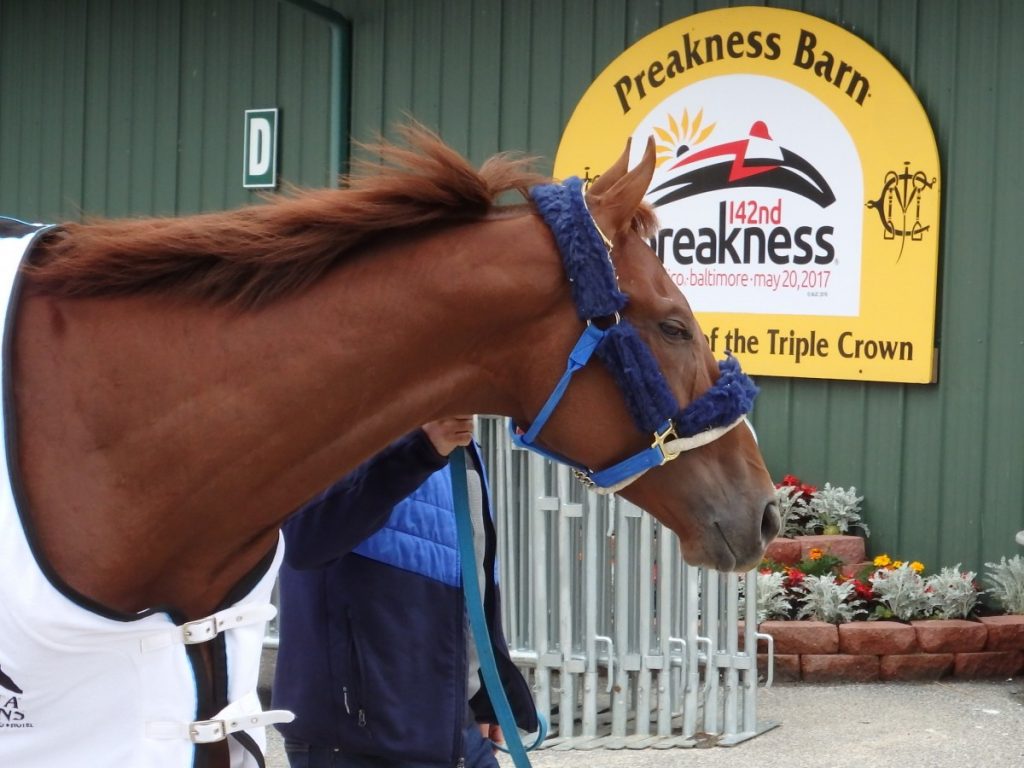 Gunnevera. Photo by The Racing Biz.

At about 3:35 this afternoon, the van carrying Preakness hopeful Gunnevera arrived at the Pimlico stable gate.

A few minutes later, the three-year-old Dialed In colt unloaded, walked calmly to the Preakness barn, and took his spot in stall 11, looking around placidly.

You’d have thought Pimlico was his home.

“No problems. He loves to ship. You can see when you stop he’s taking everything in,” said Larry Kelly, a former trainer who drove the van and who has been serving as an advisor to trainer Antonio Sano, who is expected to arrive in Baltimore Monday.

Gunnevera was something of a wise-guy horse in the Kentucky Derby, bet down to 10-1 odds, lower than all but four of his 19 rivals. But he was bounced around at the start, raced wide, and didn’t make much impact on the race, finishing seventh, some 13 lengths behind winner Always Dreaming.

But it’s still been a productive campaign for Gunnevera, whom Sano purchased at auction for just $16,000 for Peacock Racing Stables LLC. He won the Grade 2 Fountain of Youth in March at Gulfstream Park, was second in the Grade 2 Holy Bull, and finished third in the Grade 1 Florida Derby.

Gunnevera, a late-closing sort, has four wins and $1,170,200 in purse earnings from 10 career starts.  He is now one of three Preakness candidates on the Pimlico backside, joining Always Dreaming and Royal Mo.

Mr. and Mrs. Jerry Moss’ Royal Mo jogged around the shedrow of the Preakness Stakes Barn at Pimlico Saturday morning.

While checking the radar on his phone’s weather app and trying to gauge when the morning rains might stop, trainer John Shirreffs said he hoped Royal Mo will have the opportunity to put in a five-furlong breeze Sunday morning.

“I’m hoping. We’re not going to get a lot more rain, and they’ll be working the track all day, so I think it looks good,” said Shirreffs, who saddled the son of Uncle Mo for a victory in the Robert Lewis (G3) and a third-place finish in the Santa Anita Derby (G1).

Shirreffs, who has scheduled the work for 8:30 a.m., was in the process of engaging a local rider for his trainee’s final serious preparation for the Preakness.

“I just texted Gary Stevens to see if he had any suggestions of someone he knows who would like to work the horse,” said Shirreffs, who has employed local exercise rider and aspiring jockey Taylor Leatherman for Royal Mo’s morning jogs and gallops during the week.

Stevens has the Preakness mount.