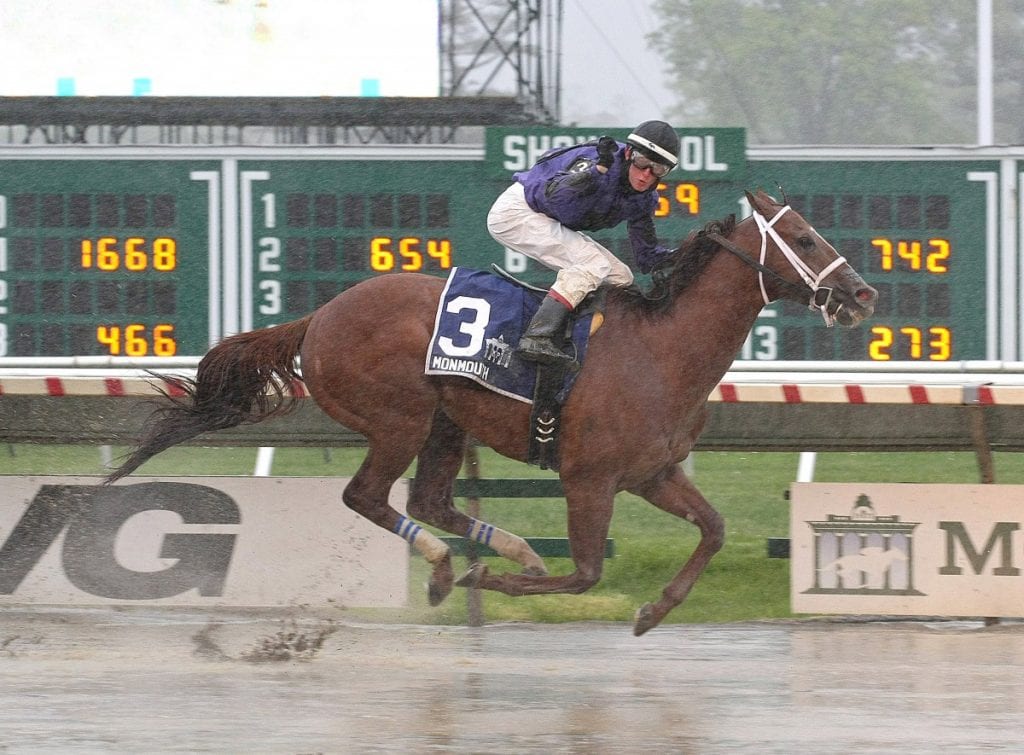 Even the rains couldn’t dampen the excitement in the winner’s circle following Saturday’s Opening Day Wolf Hill Stakes at Monmouth Park as jockey Trevor McCarthy made the stakes win his 1,000th career victory.

“The weather didn’t cooperate, but our fans sure did,” said Dennis Drazin, advisor to Darby Development LLC, operators of the racetrack. “We are very thankful to everyone who braved the elements and supported us on Opening Day.”

Monmouth announced attendance of 3,835 on a cool and rainy day.

In the colors of New Farm, Rainbow Heir sat off the early speed of Mr. Neetie, before overtaking that foe turning for home and drawing clear to a nearly two-length score. The winner, who captured last year’s running in another off-the-turf Wolf Hill, returned $4.40, $3.20 and $2.20 as the favorite in the field of six older horses. Blue Y Gold rallied up the fence to complete the $27.20 exacta and paid $5.20 and $2.80. It was another length back to Delta Bluesman, who paid $2.20 to show.

“It’s nice to get my 1,000th in a stakes race,” said McCarthy, a 22-year-old native of Wilmington, Del. “I’m very greatful for the owners and trainers who have allowed me to reach this milestone. I’ll cherish this moment for quite some time.”

“That was a nice race from him,” said winning trainer Jason Servis. “He sat a perfect trip and proved best. We’ll look for another race around here for him next.”

A 7-year-old son of Wildcat Heir from the Prospector’s Gamble mare Rainbow Pride, Rainbow Heir now sports a record of 11-3-3 from 26 starts with earnings of $562,945.