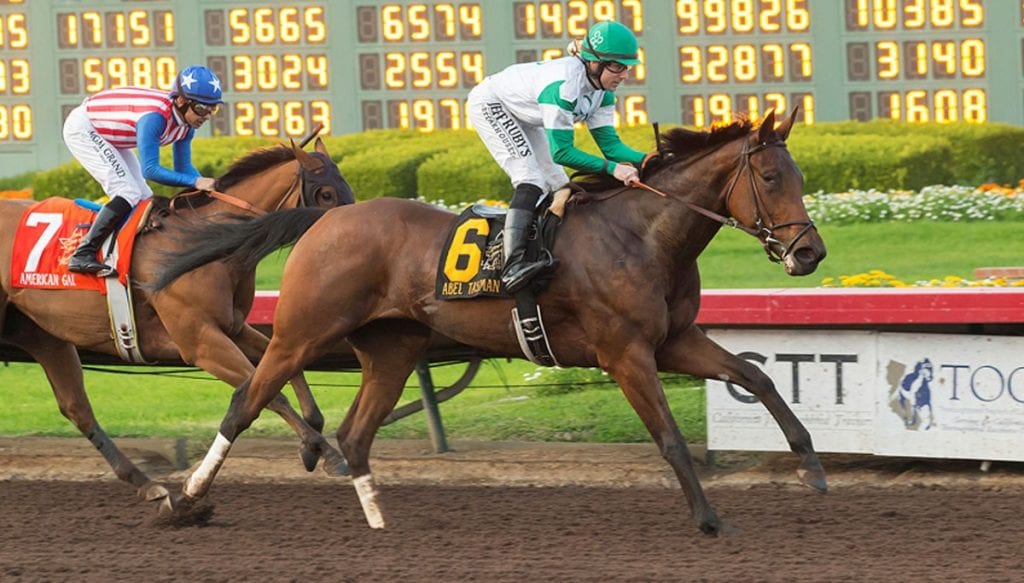 Virginia swept the Oaks/Derby double over the weekend at Churchill Downs — though you might not know it — in manners that couldn’t be more opposite. Under a masterful, measured, frontrunning ride of jockey John Velazquez Always Dreaming won the Kentucky Derby. Jockey Mike Smith kept passing fillies aboard Abel Tasman in going from last to first in the Kentucky Oaks.

In Saturday’s Kentucky Derby, Always Dreaming finished where his sire fell short, and just short. In 2012, Bodemeister blazed out of both Derby and Preakness starting gates, stubborn with the lead until just steps before the wire. Perhaps aided by a sloppy racetrack, Always Dreaming turned back every attempt made at him and stayed well ahead of those that still had their bids underway.

Trainer Todd Pletcher who endured inquisitive looks nearly every morning of Derby week for his colt’s “all too happy” gallops, had settled his colt enough during the week to get the best out of him on Saturday.

Bodemeister’s first crop of three-year-old progeny are racing this year, and Always Dreaming will be quite a beacon. Bodemeister, the Derby and Preakness runner up of 2012, was bred by Audley Farm in Berryville and sired by Empire Maker out of the Storm Cat mare Untouched Talent.

The Clarke County farm, along the West Virginia border, once stood Sir Barton, the first winner of the Triple Crown, before it was even titled as such.

“It brought back memories of 2012, that’s for sure. We were wondering about the distance but he just kept going. It’s redemption,” observed Turner Kobayashi, Audley’s General Manager. “Always Dreaming is a dream for us as well. We’re part of the stallion syndicate with Winstar.”

The Kentucky Derby is settled. Always Dreaming shipped to Pimlico on Tuesday seeking to avenge Bodemeister’s near miss in the Preakness on May 20th.

Abel Tasman, didn’t follow quite the same parade route as Always Dreaming. She was last out of the gate, and jockey Mike Smith steadied his filly off the first turn, went six wide in the second turn and cleared to win by a length and a quarter. Smith timed his rally astutely.

“I felt they were going quick enough for as far back as I was,” said Smith after the race.

Quality Road, who has four crops of foals of racing age, has seen five of his progeny win graded stakes this year. And with the win in the $1 million Kentucky Oaks, Abel Tasman shot to the top of that list.

While Bodemeister’s racing career ended with the Triple Crown — like I’ll Have Another, who ran him down in both the Derby and the Preakness, he never raced again after the latter race — in many ways Quality Road’s was just beginning after the Triple Crown.

Coming into the 2009 Kentucky Derby, Quality Road was expected to be favored after wins in the Florida Derby and Fountain of Youth. But a quarter crack in the days before the Derby forced him to the sidelines. He would later win three Grade 1 races — the Woodward, the Metropolitan Handicap and the Donn Handicap — during his 4-year-old campaign.

One of Virginia’s most successful breeders, the late Edward P. Evans, bred Quality Road, a son of Elusive Quality out of Kobla, by Strawberry Road (AUS). Evans’ Spring Hill Farm in Casanova Farm in Fauquier County was sold last year.

Two native sons of Virginia, now standing in Kentucky, channeling their brilliance through their offspring.