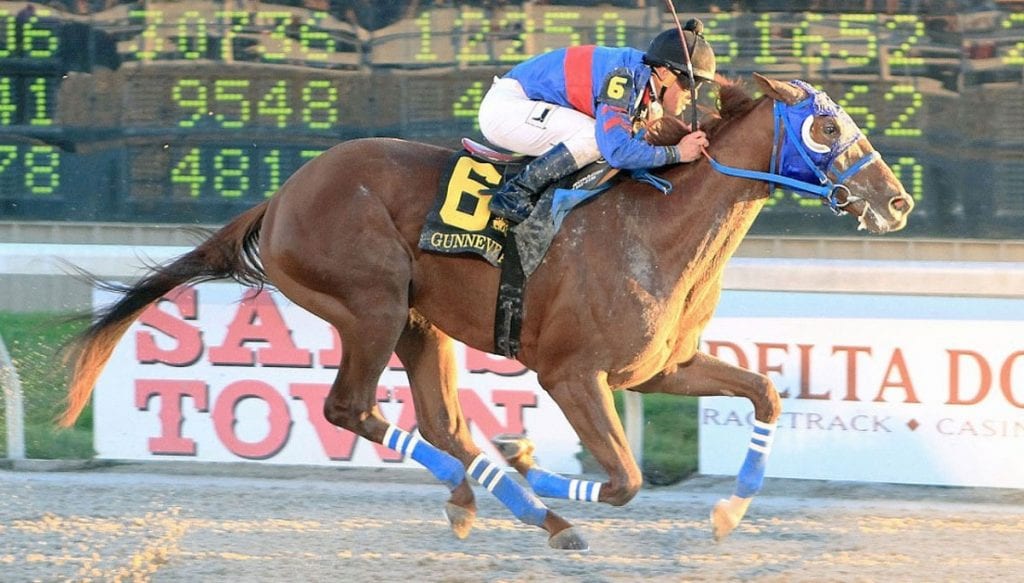 Whether Gunnevera wins the Preakness Stakes remains to be seen. But assistant trainer Alex Sano, son of trainer Antonio Sano figures to come out a winner either way.

“I’ve never had a crab cake before,” Sano said Tuesday, days before the barn’s star would head to Baltimore and the heart of crabcake country.

Gunnevera, the Grade 2 Fountain of Youth winner who finished seventh in the Kentucky Derby, resumed training Tuesday at Churchill Downs, the morning after being declared definite for the Preakness Stakes.

With trainer Antonio Sano flying back to Miami Tuesday morning, his son Alex is overseeing Gunnevera’s care and preparation. Alex Sano said two big factors in going in the Preakness are “the horse did not seem like a horse who just came out of a mile and a quarter race” and “getting Mike Smith.”

A son of Dialed In, the 2011 Florida Derby (G1) winner who ran fourth in the Preakness, Gunnevera jogged two miles counter-clockwise under exercise rider Victor O’Farrel, with lead outrider Greg Blasi on an accompanying pony. Gunnevera came off the track bouncing.

“We have a good horse, the horse is sound,” Alex Sano said. “The Preakness is our main goal right now. The idea is to have a complete and sound horse for the rest of the season, and also for a couple more seasons, so we can achieve the Haskell, Travers and hopefully we can even get to the Breeders’ Cup Classic.”

Hall of Fame jockey Mike Smith has the mount on Gunnevera in the Preakness in place of 2017 Hall of Fame inductee Javier Castellano, who confirmed Tuesday that will ride Wood Memorial third-place finisher Cloud Computing for major client Chad Brown.

“It was a very tough decision, wasn’t easy to make due to several factors,” he said. “But we ended up deciding that the horse came out of the horse real good, and why not run him in the Preakness? We decided to take one race at a time, and after the Preakness we’ll go on. We think the horse has a lot of chance in the Preakness. Javier Castellano is going to ride Chad Brown’s horse, and we understand the situation for him. As a result, we’ll have Mike Smith aboard. He’s another good jockey we really like.”

Alex Sano said Gunnevera will van from Louisville to Baltimore Saturday, with former trainer Larry Kelly at the wheel.