Despite rain and cool temps, “all good” at Charles Town Classic 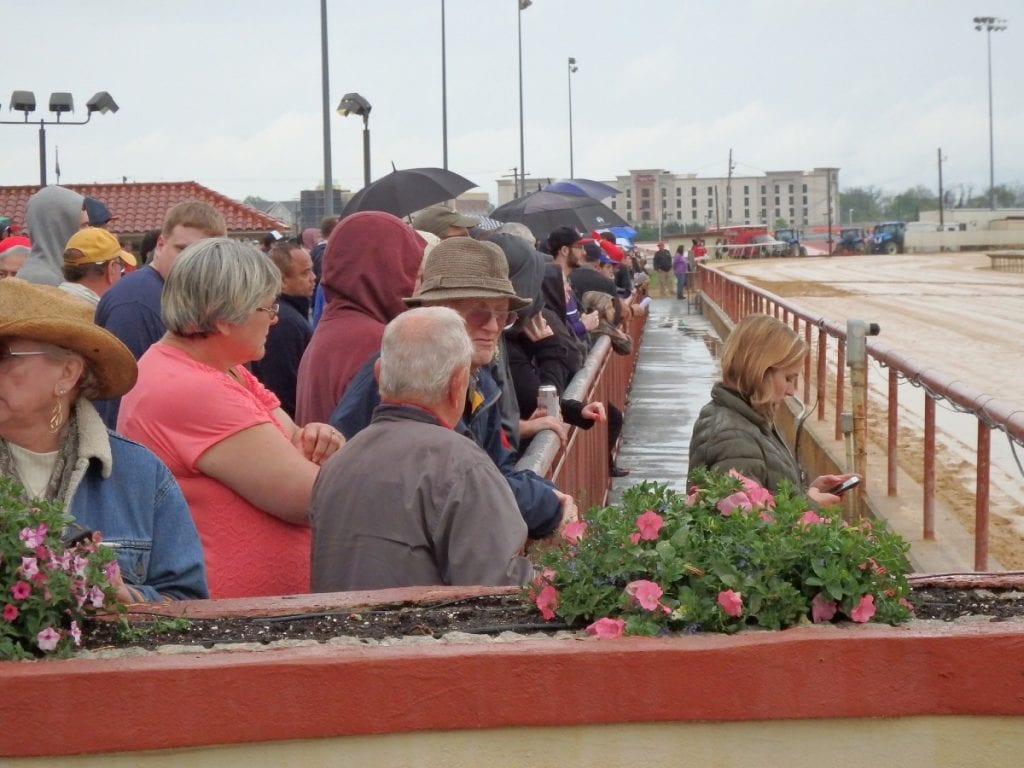 The crowd came out despite the rain for Saturday’s Charles Town Classic. Photo by The Racing Biz.

“Beyond thought” is how Joe Servis described the once-far-fetched notion that Charles Town would one day host a Grade 2 race with a purse of $1.25 million.

“You couldn’t imagine that,” he added, “no more than I could imagine the $16 million race they’re talking about at Gulfstream.”

Servis, 85, knows what he’s talking about. He was a longtime steward at the track, and before that, he was a jockey. In fact, he won the very first race contested at nearby — and now defunct — Shenandoah Downs, back in 1959.

That $1,200? That’s just about one-tenth of one percent of what Saturday’s featured Charles Town Classic offered.

That sort of pleased disbelief was plentiful Saturday at Charles Town, which handled a shade over $3.9 million on what will likely be its biggest day of 2017. 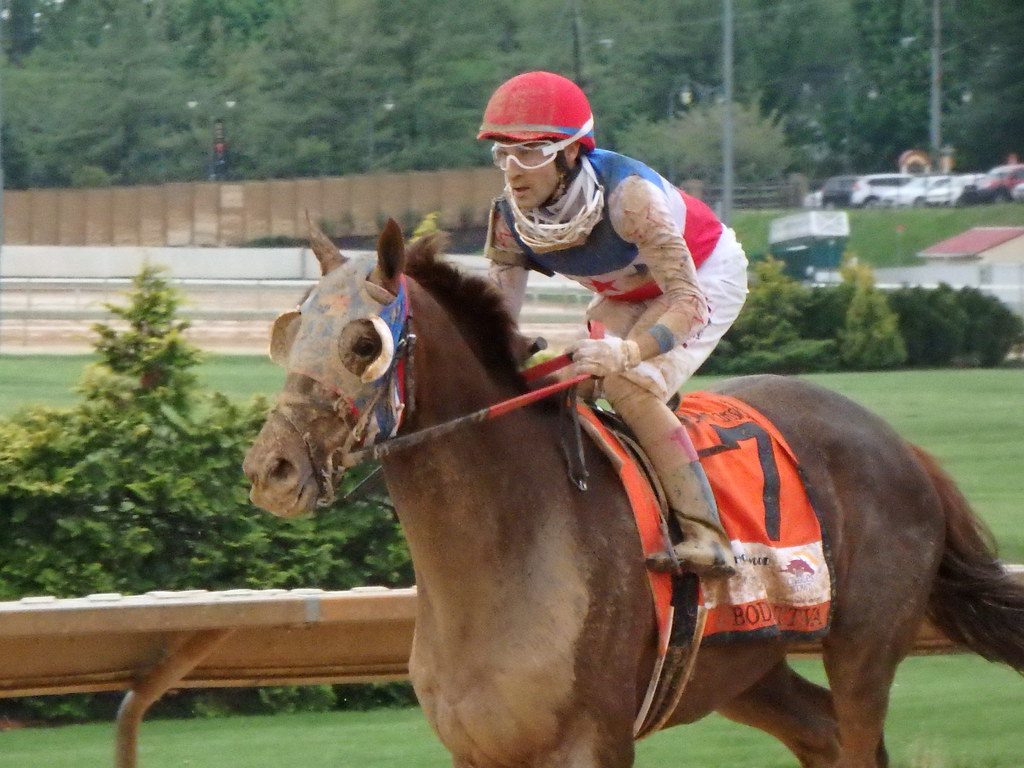 “My dad was the publicity director here for a number of years,” he recounted. “If you could have told me back in the mid-90s, when I was five or six years old, that we were going to have a Grade 2, $1.25 million race, I would have said you were crazy. It means the world.”

In the day’s first race — what Espinosa called “our bread-and-butter,” a nickel claiming race going 4 1/2 furlongs — his grandfather, Victor, saddled the longest shot on the board, a 12-year-old Luftikus mare named Tuftikus. Tuftikus, making the 99th start of her career, nearly stole the show, falling short of victory by just a neck.

“That kind of got the juices flowing,” Espinosa said. “It’s one of my favorite parts of the job here is any time I get to call one of his horses… He doesn’t have that many stalls anymore, but he’s still going up in his upper 70s.”

Espinsosa said that he’d been “especially amped up” for his grandfather’s race, but that “the butterflies will start to pick up really here [after] race five.”

And sure enough, in race six, favored Aaron’s Tap broke a step slow, had a bad trip, and was never a major player. Ollie Figgins trainee Hot Mic surged late under Matt McGowan to win a frantic finish by a neck, at 21-1 odds, with 38-1 Pistolinmypocket second.

While Espinosa was able to enjoy the card from the enclosed confines of the announcer’s booth, track photographers Katherine Turnbull and Bethanny Roll were not so lucky. Both women are natives of the area. They endured cool temperatures and a light but persistent rain that turned the track boggy and jocks and horses into muddy messes.

It wasn’t enough to get Roll out of her white heels, however.

“I get excited because it’s like the most important day of the year,” Roll said. “All the press comes out, and we have to defend our home turf.”

“I think it’s a step in the right direction,” Turnbull said. “I’d like to see more of a hometown influence in it.”

“It’s  a shame there’s no hometown horse in it. No jockey either,” she said. “The closest thing we have to a hometown jockey is Xavier Perez.”

Perez, who got his start at Charles Town before shifting tack to Maryland, rode Bodhisattva, the second longest shot on the board at 79-1. Getting some help from the pace and employing his typical late-running style, Bodhisattva, trained by Jose Corrales at Laurel Park, rallied from last to finish fourth.

Turnbull said that, although the photography team had an additional member — in the person of Kevin Coady — and thus would have a greater variety of shots than normally, it would otherwise be “another day at the office.”

The same wasn’t exactly true for Chad Harmon. Harmon, a freelance photographer whose work has appeared in The Blood-Horse and Mid-Atlantic Thoroughbred, among other spots, won the 2012 Jerry Frutkoff Preakness Photo Award. Saturday, he had the requisite rain gear on and a plastic covering for his camera.

“The mud’s not a problem,” he said. “I’ve been doing it long enough that it doesn’t bother you much. As far as the photography goes, it adds a bunch of different options for you. I’ve been going down to shoot the final turn today to get some of the mud kickback. You get a lot of mud jockey shots. It gives you some different options that you don’t usually have.”

Harmon has shot the last 14 Breeders’ Cups, as well as numerous Kentucky Derbies, Preaknesses and other major racing events.

“It’s different,” he said of shooting at the bullring versus under the bright lights of the Derby. “When you’re used to shooting at Churchill Downs, at Belmont, where they aren’t going around two-three times in a mile-and-an-eighth race, the angles and everything are a little different here.”

And, he said, the event seemed to mean more. A local jock had mugged for the camera, he laughed — something rarely seen at major tracks, where the riders are used to the press.

“Here there’s almost an extra buzz,” he added. “At the Churchill Downses, the Saratogas, people are used to seeing those horses, whereas it’s an event here. You get people that are local that wouldn’t get to see it otherwise.”

Back inside, Joe Servis and his daughter Jodie were gearing up. Jodie’s brother Jason would send out Sunny Ridge in the Classic. There was a lot of money on the line — and family pride.

“I’m excited,” Jodie said, hours before the big race. “I’m a big fan, and any time anybody from the community does really well, it’s very uplifting. My heart fills when my family does well. I’m really proud of my brothers and my sister.”

Her brothers, Jason and John, both are trainers. Her sister, Laurie Plesa, is married to trainer Eddie Plesa and works with him in the racing operation.

Well backed at the windows — he went off as the 3.20-1 second choice — Sunny Ridge had no answers when the serious running started and ended up sixth.

But even before the race, Joe was philosophical. He still lives just outside of Charles Town. He’s seen one racetrack rise and fall. He’s seen Charles Town Races become Hollywood Casino at Charles Town Races, with, for a time, steeply rising purses that have since fallen. He’s seen the birth and growth of a million-dollar race at the little bullring. He’s seen the ebb and flow of an industry and the lives it affects. He’s seen all four of his children move away, with one, Jodie, returning to be nearby. He can take the long view.

“It’s all good,” he said. “[My kids] They were all raised here, and they were all sent out because I told them they could always come back. And they’ve all done very well and made me proud.”