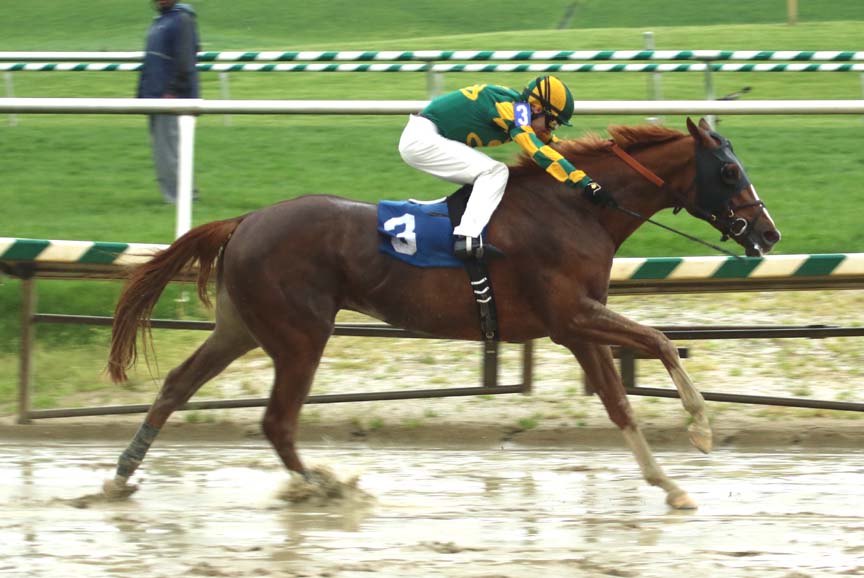 Cobra Farm Inc.’s Twisted Tom raced in contention from the start, took command on the far turn and thwarted a strong challenge from O Dionysus in mid-stretch before pulling away to a 2 ¼-length win in the $125,000 Xpressbet.com Federico Tesio Saturday at Laurel Park.

The 36th running of the Tesio for 3-year-olds at 1 1/8 miles was one of five stakes worth $475,000 in purses on the 11-race program. For the second straight year, the Tesio was a ‘Win and You’re In’ event for Triple Crown-nominated horses to the 142nd Preakness Stakes (G1) May 20 at historic Pimlico Race Course.

Twisted Tom ($12.60) ran his win streak to three races in the Tesio with his second straight stakes victory, following the 1 1/16-mile Private Terms March 18 at Laurel, where he came flying on the far outside with a steady late run to nip favored O Dionysus by a nose at the wire.

Saturday’s race was much less dramatic for Twisted Tom, a New York-bred son of Creative Cause trained by Chad Brown. Jockey Feargal Lynch settled him in the clear racing three wide stalking pacesetter 23-1 long shot Hashtag Alex through a quarter-mile in 24.39 seconds and a half in 48.08.

Twisted Tom wrested the lead from Action Everyday after running six furlongs in 1:13.27 as O Dionysus rolled up on the far outside to launch his bid under jockey Jevian Toledo. The two raced on even terms to the eighth pole until Twisted Tom dug in and edged away to win in 1:53.60 over a sloppy and sealed main track.

O Dionysus was a clear second, 2 ¾ lengths ahead of Action Everyday. They were followed under the line by Carradine, the 4-5 favorite who failed to threaten, and Hashtag Alex.

“He ran terrific and Feargal really rode him well once again. They’re a great team, those two. The horse showed a lot of heart again,” Brown said. “He’s a long-winded, hard-trying horse that obviously showed he has a tremendous amount of stamina and will to win. He’s a horse that continually is improving, which we love to see. We’re just really proud of his effort today.

“He showed a new dimension today, and dealing with an off track he handled it fine,” he added. “Feargal deserves a lot of credit for using good judgment in keeping him out of trouble. He’s a big horse and although he was losing some ground he picked a good spot to let him relax and find his rhythm. When that horse came to him on the outside, he showed his heart.”

Lynch also rode Twisted Tom in the Private Terms, where the chestnut gelding was never in a threatening position until finding room on the outside and gradually grinding away at the lead down the stretch.

“He broke sharper today. I just got into a nice rhythm all the way,” Lynch said. “I thought O Dionysus might struggle to stay and I knew from my horse’s gallop-out last time that he would like the distance. Today he had no kickback and a small field. He’s a turfer and a mudder and a very adaptable, huge horse who should get better.”

Twisted Tom is not Triple Crown-nominated, leaving Brown unsure whether the horse would be headed to the Preakness. He is pointing Klaravich Stables and William H. Lawrence’s Cloud Computing to the Middle Jewel of the Triple Crown.

“Because he’s not nominated it certainly complicates things, so I’ll speak to the ownership group. Right now we’ll just enjoy this win,” he said. “We’ll see how the horse comes out of the race physically and then we’ll all probably speak about it next week sometime and come up with a plan.”

The Tesio was the second straight runner-up finish and fifth from 10 career starts for Marathon Farms’ O Dionysus, a runaway winner of the one-mile Miracle Wood Feb. 18 at Laurel.

“I’m not sure whether he’s just hanging or waiting on horses. I guess I’m going to have to change some things around. He runs, but when he gets to them and he gets his head in front it’s like he either waits for horses or he’s hanging. I’m not sure,” trainer Gary Capuano said. “He runs, but he’s not winning. He cruised up there and turning for home it looks like he’s got horse and he’s just going to go on, and he either hangs or flattens out. But he tries. He’s running.”