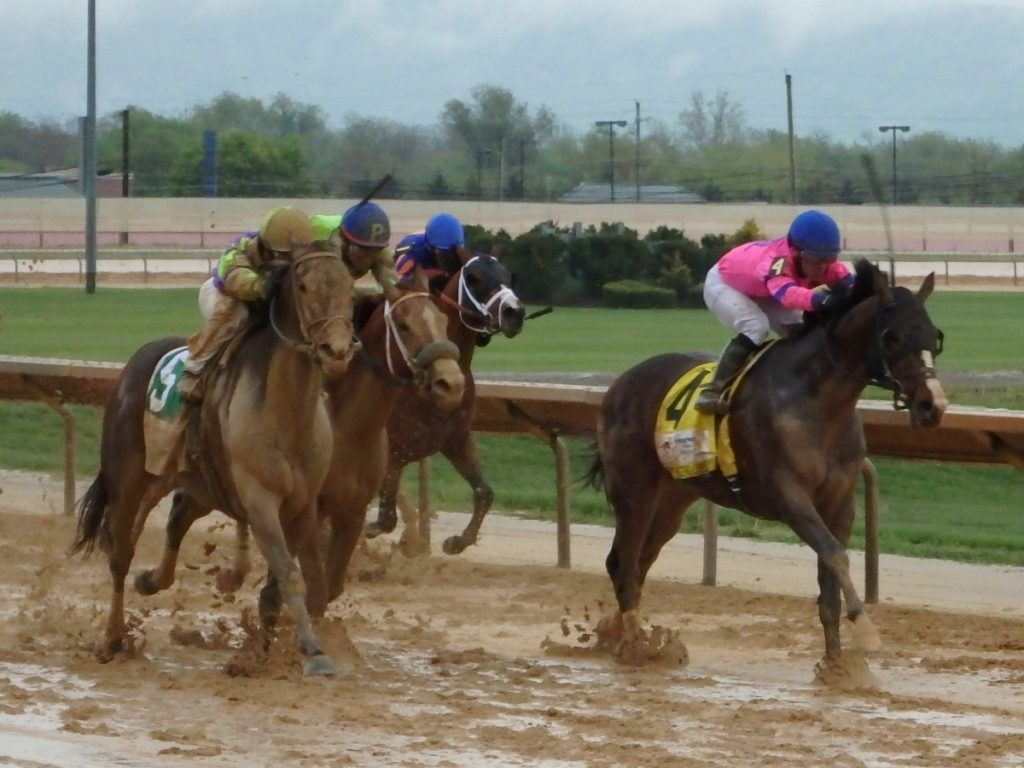 Imperative (outside) was up late to win the Charles Town Classic over Matt King Coal (#4) and War Story. Photo by The Racing Biz.

“The whole life is about family,” said Ron Paolucci in the late afternoon gloaming Saturday at Charles Town. “My dad’s not doing real well. I wish he could be here. That’s the toughest part.”

If Big Ron Paolucci had made the trip to the Mountain State’s Eastern Panhandle, he’d have seen his son’s horse, Imperative, storm from sixth to victory in the Grade 2, $1.25 million Charles Town Classic to earn his second Classic victory. Imperative, who has run in the event four times, also has a runner-up effort to his credit.

Family was a recurring theme in the track’s biggest races on its biggest day. In the prior race, Mia Torri, named for owner Anthony Sagan’s maternal grandmother, was a flashy winner of the $100,000 Sugar Maple Stakes.

Though Imperative has just six wins to his credit, the winner’s share here will push his career earnings to nearly $3 million. That’s mostly thanks to his efforts here, but Paolucci, who runs as Looch Racing Stables, thinks the future of a horse who’s run just three times in his silks is bright.

“The big key to him is getting him away from California,” Paolucci said. “It’s just not a good surface for him to train on. He runs there on all heart.”

Which isn’t to say he didn’t show heart today, merely that, as trainer Bob Hess put it, “He needs these soft East Coast tracks.”

Cautious Giant, at 84-1 the longest shot here, threw in the towel midway up the backstretch — he finished last — and Linda Rice trainee Matt King Coal, with Horacio Karamanos went to the attack.

But Looch’s other runners, Imperative and War Story, were revving up midway on the turn. War Story, trained by Jorge Navarro for Looch, had the jump on his teammate, but Imperative had the momentum.

Those two finished one-three, with Matt King Coal, who ran a giant race, earning the place. Late-running Bodhisattva, the second-longest shot here, at 79-1, was along for fourth, just ahead of Stanford. Running time for the 1 1/8 miles was 1:53.05.  Imperative paid an attractive $12 to win, with the exacta worth an even $100.

In the $100,000 Sugar Maple, one race prior to the Classic, Mia Torri was miles the best in an impressive effort under Javier Castellano. She served notice to her three rivals with an opening quarter-mile of 22 3/5 seconds, maintained a half-length lead after a half-mile, and drew away to a 3 1/4-length win in 1:25.84 for seven furlongs. Second choice Kinsley Kisses was second.

Which isn’t bad when you consider that Mia Torri is the first Thoroughbred that Anthony Sagan has ever owned.

“My friends in racing said [having Mia Torri as his first horse] ruined me,” Sagan said with a laugh. “It’s only downhil from here. But I’m going to enjoy the ride while it’s going on.”

Mia Torri had been fourth in her prior start, in the Grade 2 Inside Information, but had been a little bit under the weather prior to that race, said trainer Jorge Navarro.

Not today; today she was cranked.

“I know she likes the dirt, and I know she likes this track,” Sagan said of his best and only current runner, who was second by an eyelash or so in last fall’s Grade 3 Charles Town Oaks. “But the slop was the only thing I was nervous about.”

Keeping the family theme, Mia Torri races in the name of Anthony’s father Phillip. And she’s named for his grandmother.

“I named the horse after my grandmother, who passed away,” Sagan said. “Her name was Cantorri; we called her Torri when we were kids.

“It has special meaning to me. I had offers to sell her and I didn’t want to.”

And with good reason. The game little General Quarters filly keeps outrunning her size. And though Sagan lives in Chicago — where retired jock Jerry La Sala, “a good personal friend of mine,” got him involved in the sport — the horse will remain on the East Coast for the summer in Navarro’s Monmouth Park barn.

Imperative, likewise, figures to do his future work in the East. Hess had sent him for the last couple of weeks to Michael Ann Ewing’s Keeneland barn, and the softer racing strips of the region beckon.

And for Paolucci, who was resplendent in a black sweatsuit and eye-catching lime-green sneakers, the event had special meaning, too. He was in a reflective mood in the post-race winner’s circle.

He and his father, he said, “used to go to Thistledown every day from the time I can remember. As soon as that last race was over we’d hop in the car and go to Waterford Park. That’s how I spent every Friday and Saturday and Sunday of my childhood and you know what, I loved it. I can’t remember what I did a year ago, but I remember the first bet I made. I remember every trip we took to Waterford. Those memories will never leave.”

He lost that first bet that he still remembers — “on a horse called Grand Elm, believe it or not,” he said.

He may have lost on Grand Elm, but his bet on Imperative is paying off in spades. The seven-year-old Bernardini gelding’s two wins since joining Looch have brought over $970,000 in purse earnings.

Sometimes, Paolucci said, when he gets down on the sport, he thinks about getting out. But days like this help.

“Like most things, you always want to pleasure your parents, and my dad gets more joy out of the races,” he said. “I know the smile it puts on his face, and I keep going.”