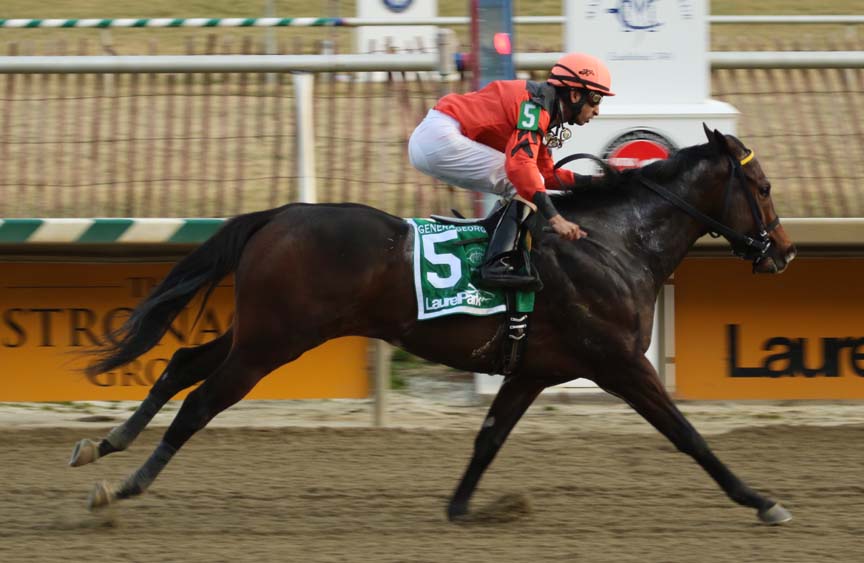 A slight stumble out of the gate wasn’t enough to slow Raymond Mamone’s Imperial Hint, who went straight for the lead and turned away a brief challenge from multiple stakes-winning millionaire Stallwalkin’ Dude in the stretch to win the $250,000 General George (G3) Saturday at Laurel Park.

The 41st running of the seven-furlong General George for 4-year-olds and up was among six stakes worth $850,000 in purses on the 10-race Winter Carnival program and one of two graded events, along with the 65th running of the $300,000 Barbara Fritchie (G2) for females 4 and up.

“This was a very nervous race for me and my client. I had never won an graded stakes race before, so after the way he won I’d be more relaxed because this is the tough one to get,” Carvajal said. “I always thought he was a graded stakes horse.

“You know, it’s funny. I was walking out of the paddock when the horses were already on the track and I hear a few people say, ‘Look at the favorite. He’s humungous. Look at the five horse. He’s so small. He has no shot at all.’ But I had in mind, ‘Yeah, you don’t know the heart he has.’”

Imperial Hint and jockey Julian Pimentel, aboard for the first time, overcame their early bobble to set a demanding pace of 22.61 seconds for the quarter-mile and 45.28 for the half, and was still there after going six furlongs in 1:08.99. Afleet Willy, who entered the race off three straight wins, gave a challenge on the inside before giving way to even-money favorite Stallwalkin’ Dude, kept in the clear three wide by jockey Irad Ortiz Jr.

Stallwalkin’ Dude ranged up to made a bid for the lead after straightening for home but Imperial Hint had another gear and spurted away, hitting the wire 2 ¼ lengths in front in 1:21.20 over a fast main track. The final time was just .25 seconds off the course record set by Greenspring on Feb. 15, 2010 in his General George victory.

“He’s a very fast horse,” Pimentel said. “He broke a step slow but right away he recovered himself real quick and he just ran fast all the way around there. He just went on about his business.”

Multiple stakes winner Never Gone South emerged from a tight three-way finish to get third, a neck ahead of Ocean Knight, who was another head in front of stablemate Classy Class. Afleet Willy, Heaven’s Runway, Grasshoppin and Voluntario completed the order of finish.

“I was watching the race and it looked like he stumbled a little bit out of the gate but he recovered very quick. I was worried a little bit to see the horses that were coming off the pace but when he opened up I was very confident,” Carvajal said. “After he won his first race I thought he was going to be a nice horse. We just had a couple little hiccups down the road but now he’s doing really well. I have no plans right now. I’m just hoping to go back to the barn and see if he’s healthy and we’ll go from there.”