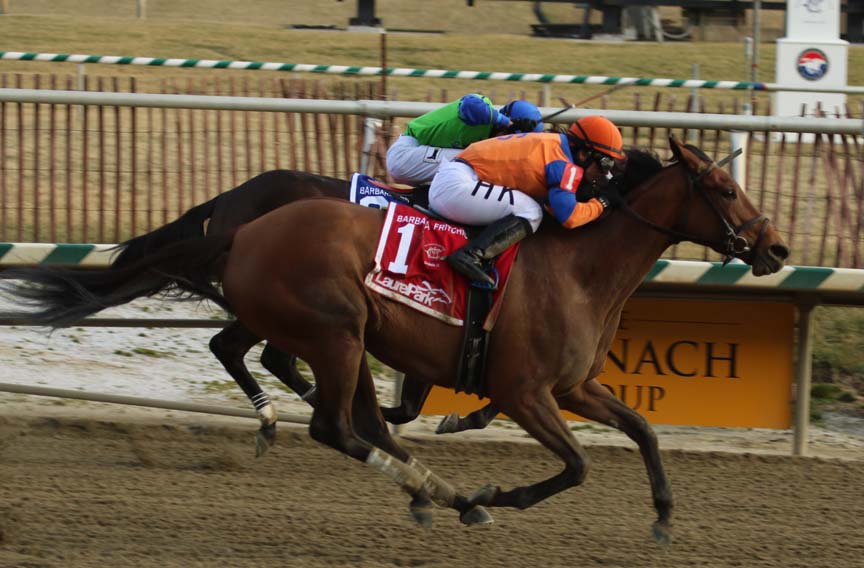 High Ridge Road ran down By the Moon to win the G2 Barbara Fritchie Stakes. Photo by Laurie Asseo.


From a Maryland Jockey Club release

Making up ground with every stride down the middle of the stretch, Martin Schwartz’s High Ridge Road kept her perfect record at Laurel Park intact with a dramatic neck victory over Grade 1 winner By the Moon in the $300,000 Barbara Fritchie (G2) Saturday at Laurel Park.

The 65th running of the seven-furlong Barbara Fritchie for females 4 and up was among six stakes worth $850,000 in purses on the 10-race Winter Carnival program and one of two graded events, along with the 41st running of the General George (G3) for 4-year-olds and up.

The Winter Carnival’s total handle was a record $4.9 million.

It was the second straight win over By the Moon and fourth victory in as many tries at Laurel, all with jockey Horacio Karamanos aboard, for the Linda Rice-trained High Ridge Road, who was cutting back to a sprint for the first time in 16 months.

Sent off as a narrow third choice at 3-1 in a field of eight, High Ridge Road ($8.20) completed the distance in 1:22.50 over a fast main track. By the Moon, second by a half-length to the winner in the Thirty Eight Go Go Dec. 31 at Laurel, was 1 ½ lengths ahead of 2016 Fritchie runner-up Clothes Fall Off in third.

“I’ve been a little nervous about being in the one post position all week since they drew the race and was concerned about that, but I thought Karamanos negotiated himself out of the one-hole pretty well,” Rice said by phone. “In the middle of the turn I thought we might be in trouble; she wasn’t making up any ground, but then as soon as he got her to the outside in the stretch and she switched her lead she’s really got a great closing kick so I was very excited.”

Wonder Gal broke running from outside Post 8 and went to a familiar front-running position, going the first quarter-mile in a spirited 22.70 seconds before 80-1 long shot Rowd E Allie, racing on the inside, nudged to a short lead following a half in 45.34 as By the Moon, the 7-5 favorite, bided her time in the clear three wide.

The pace was still fast as By the Moon took over the top spot after six furlongs in 1:09.74 and Karamanos still had some work to do on High Ridge Road in fourth around the far turn. The Laurel-based rider swung his filly, making her 4-year-old debut, to the far outside after straightening for home and set his sights on By the Moon, who had opened up by two lengths.

“I really didn’t want to be inside and I got lucky. I saw the speed go and I sat behind,” Karamanos said. “She made me work at the three-eighths pole. She was a little bit lazy but I don’t think seven-eighths is the perfect distance for her. At the top of the stretch she gave me a little kick but she didn’t want to switch leads. Once she switched leads at the sixteenth pole and gave me a kick, I got up at the wire over the other filly. I beat her last time, too.”

A 5-year-old bay daughter of Quality Road, High Ridge Road came with a relentless drive down the lane to reel in By the Moon and jockey Victor Carrasco, working feverishly along the rail. Wonder Gal tired late but held on to third by a length over Regia Marina, who was followed by Sweet On Smokey, Takrees and Rowd E Allie.

“Frankly, the seven-eighths is a little short for her and there were pretty nice fillies that were in front of her. They were going pretty fast and my filly ideally wants to run a little further with a little softer fractions,” Rice said. “She was struggling to keep up with that pace but it worked out for us in the end.”

The Rice-trained La Verdad was second in the 2014 Fritchie in her stakes debut. She would go on to win eight stakes, four of them graded, and be named the champion female sprinter of 2015.

“We’re just thrilled to get a Grade 2 win for this filly. The Barbara Fritchie has been a race that I’ve wanted to win. I ran La Verdad in the Barbara Fritchie and she finished second; it was a little too far for her,” Rice said. “It’s a thrill to win the race. It’s a prestigious race and it’s been around a long time. I’m glad we could get such a great result.”