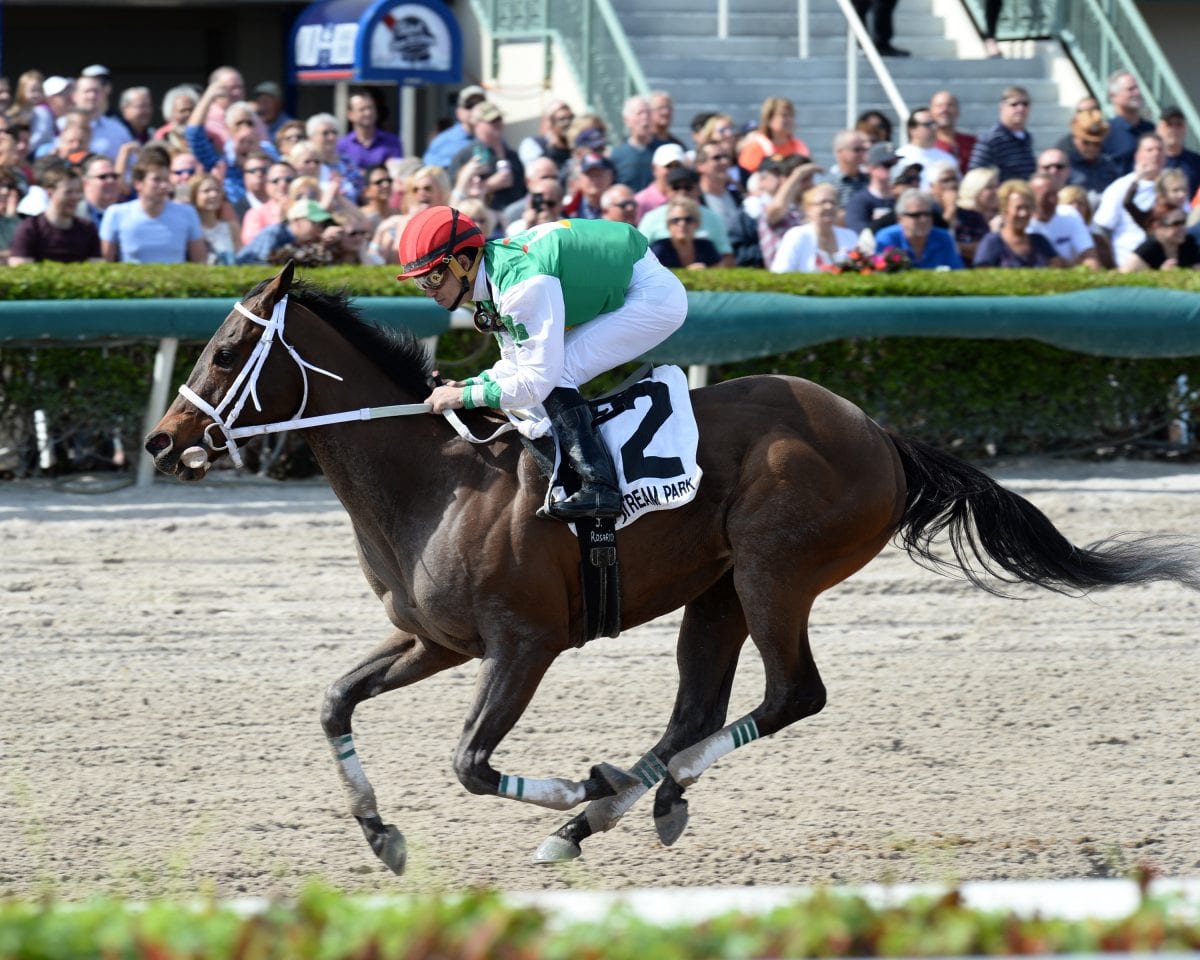 Cathryn Sophia’s win in the G2 Forward Gal at Gulfstream Park was her first against graded rivals. Photo by Lauren King.

Stellar Wind’s bid to repeat as the top horse bred in the mid-Atlantic fell just short.

Instead, it is Maryland-bred Cathryn Sophia who earns the laurels as the Mid-Atlanic Thoroughbred/The Racing Biz Top Midlantic-bred for 2016.

The Mid-Atlanic Thoroughbred/The Racing Biz Top Midlantic-bred Poll is comprised of some two dozen media members and other participants in mid-Atlantic Thoroughbred racing.

The top three horses represent three different states, and together, they accounted for seven graded stakes victories in 2016, four against Grade 1 rivals.

“What a great year for horses bred in the mid-Atlantic region,” said Cricket Goodall, executive director of the Maryland Horse Breeders Association, which publishes Mid-Atlantic Thoroughbred.  “The depth of the field this year far surpassed previous years, which made this an especially tough decision for the voters.”

The second- and third-place finishers both put up strong enough seasons to make solid cases for top honors.  Stellar Wind, a Virginia-bred, won two of four starts in 2016, taking a pair of Grade 1 wins – the Clement L. Hirsch and the Zenyatta Stakes – over Beholder.  She finished fourth in the Breeders’ Cup Distaff after breaking poorly.

Finest City, bred in Pennsylvania, won the Breeders’ Cup Filly and Mare Sprint to cap off a season in which she also won the Grade 2 Great Lady M Stakes and earned $823,200.

But it was Cathryn Sophia who topped them all.

Cathryn Sophia earned top honors after a year in which she won four of seven starts and finished in the money in all of them.  She won three graded races and earned more than $1.1 million on the season.

Cathryn Sophia’s seasonal highlight came in the Grade 1 Kentucky Oaks.  That day, under Javier Castellano, the daughter of Street Boss cruised up outside the leaders and went on to a 2 ¾ length victory.

That win was her third against graded rivals.  She also won a pair of Grade 2 events at Gulfstream Park, taking the Forward Gal in late January and the Davona Dale in February.

Cathryn Sophia’s other highlights include a trio of third-place finishes in Grade 1 company: the Ashland Stakes at Keeneland, the Acorn at Belmont Park, and in her season finale, the Cotillion at Parx Racing.

“Cathryn Sophia stamped herself virtually from her first race as a special talent,” said Frank Vespe, owner and publisher of The Racing Biz.  “This honor marks a terrific season in which she faced off – and usually defeated – the best fillies of her generation.”

Cathryn Sophia was bred in Maryland by Robert Manfuso.  She is by Street Boss out of the unraced Mineshaft mare Sheave.  Manfuso sold her in 2014 at the Fasig-Tipton Midlantic Fall Yearling Sale in Timonium, where she fetched a winning bid of $30,000 from Charles Zacney, who named the then-unnamed filly after his niece, Cathryn McCarry.

Zacney, who races under the name Cash Is King LLC, sent Cathryn Sophia to trainer John Servis’s Parx Racing base.  She won at first asking there, in October 2015, and followed that with a 16-length romp in the Gin Talking Stakes at Laurel Park, the final race of her 2015 season.

“She was a true campaigner,” pointed out trainer John Servis.  “She was a racehorse.”

Zacney sold Cathryn Sophia, who completed her career with six wins from nine starts and earnings of over $1.2 million, at this past fall’s Fasig-Tipton’s November Sale.  She fetched a winning bid of $1.4 million from SF Bloodstock and will be bred to Pioneerof the Nile.

The poll is restricted to horses that have run in 2016 and were bred in Pennsylvania, Maryland, Virginia, West Virginia, New Jersey, Delaware, and the Carolinas.