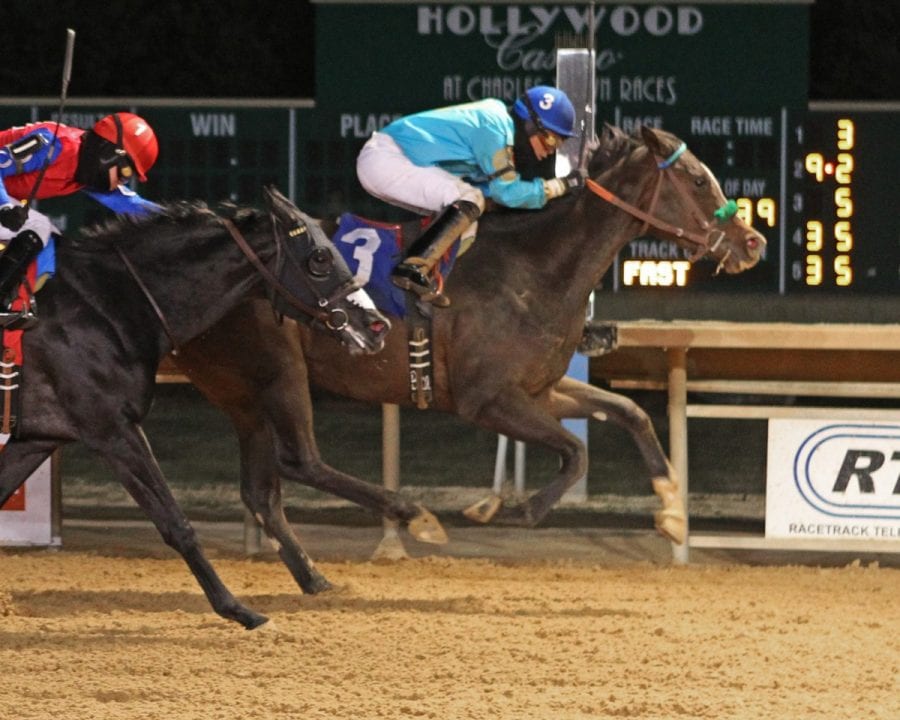 Honeymoon Cruise was up late for the Eleanor Casey Memorial Stakes win. Photo by Coady Photography.

As it happened, both of those things turned out to be untrue.

Unaquoi ran out of steam in the late stages of the Charles Town fixture, and Honeymoon Cruise, under a hustling ride from Arnaldo Bocachica, rallied up the rail to win by a half-length.  Running time for the seven furlongs was 1:28.71.

The shape of the race changed dramatically in the very first jumps.  Lady Bearoness, undefeated entering the event, went off as the third choice in the field of 10 and was expected to be part of the early pace. But she was rank leaving the gate and reared up, costing herself all chance; after a quarter-mile, she was 32 lengths behind the leader.

That also left the speedy Unaquoi, under Kevin Gomez, in charge of the early running.  The Gattopardo filly doled out moderate fractions of 23.93 seconds for the opening quarter and 48.48 for the half-mile.  Longshot Lies and Scandals gave early chase but surrendered after a half-mile, while Honeymoon Cruise, in third, came under a drive at that point.

But Bocachica never stopped working on Honeymoon Cruise, who finally kicked into gear late in the race.  In the final yards, she surged up the rail past Unaquoi to the win.  Unaquoi held second, and it was four lengths back to Scottish Denis in third.

Honeymoon Cruise is trained by Jeff Runco for owner Debbie Rhodes, who purchased her for $35,000 at last October’s Fasig-Tipton Kentucky Fall Yearling Sale.

Honeymoon Cruise was bred in West Virginia by Barak Farm.  She is by Archarcharch out of the unraced Gilded Time mare Gildey.  She now has two wins from two starts, with earnings of  $44,400.