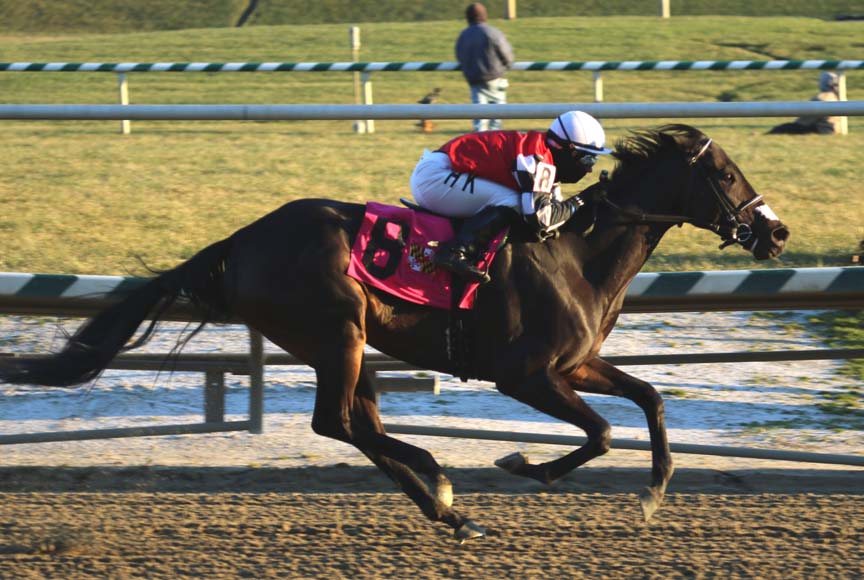 Showing off her affinity for the local track, Lovable Lady reeled in heavy graded stakes-winning favorite Hot City Girl approaching the stretch and sprinted clear after straightening for home to post a powerful 12-1 upset in Saturday’s $100,000 Willa On the Move at Laurel Park.

A 5-year-old daughter of Not For Love bred and owned by the Samuel H. Rogers Jr. Trust, Lovable Lady ($26.80) won for the fifth time this year and third in a stakes at Laurel, where she has a lifetime record of 5-2-3 from 11 starts.

She captured the Jameela on turf and the Politely on dirt, both at six furlongs, this summer and fall before having her three-race win streak snapped when third by a half-length as the favorite in the Maryland Million Distaff Oct. 22. Last time out, she faded to finish next-to-last in the one-mile Geisha, also against open company, Nov. 19.

“Today was about revenge because last time the filly didn’t run good. She didn’t decide to run last time, but today she was running,” regular rider Horacio Karamanos said. “She broke out of the gate and I tried to stay behind the speed a little but I couldn’t hold her. At the three-eighths pole she decided to go and I let her pick it up. I never asked her. At the top of the stretch she took the lead and I said, ‘Go home. Vamanos.’”

Lovable Lady broke sharply and outran New York shipper Hot City Girl for the early lead before dropping back and letting the 2-5 favorite take the field through an opening quarter-mile in 22.28 seconds. Lovable Lady remained keen on the leader, coasted to the front after running a half in 45.46 and kept rolling through the stretch, finishing in 1:09.56 to win by 4 ½ lengths.

“She’s been doing great. She’s been jogging and galloping; she just didn’t want the mile [last time] and she just got so rank in the middle of the race, he fought her and she gave up,” said winning trainer Mary Eppler, who leads the current fall meet standings. “I’ve never won a meet. Gosh, the barn’s worked so hard and they deserve the credit.”

Athena, winner of the Thirty Eight Go Go Stakes last December in her only previous trip to Laurel, closed to finish second. It was 2 ¼ lengths back to 2015 Charles Town Oaks (G3) winner Hot City Girl, making her first start since Aug. 18 with a foot abscess.