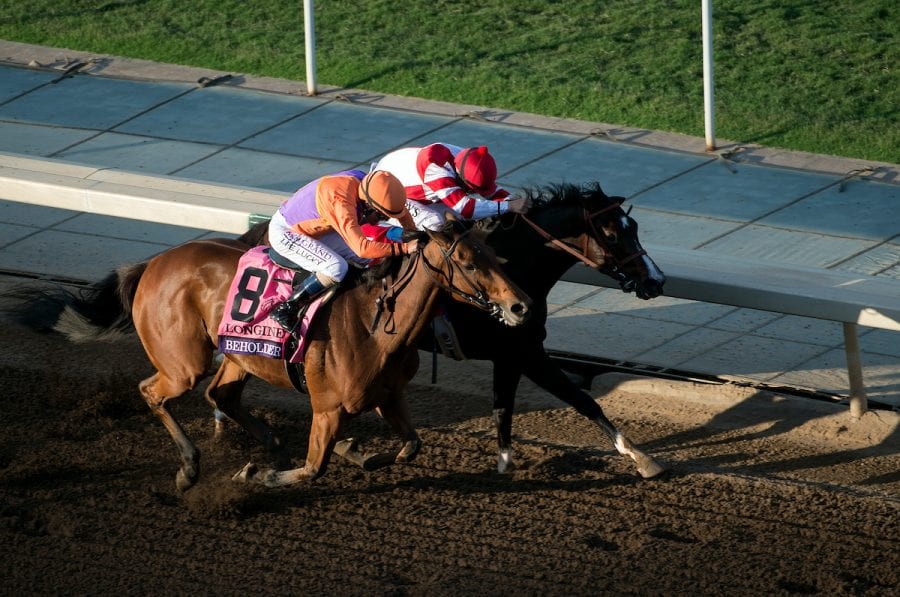 On a Breeders’ Cup Friday highlighted by an epic showdown between three-year-old Songbird and and six-year-old Beholder in the Distaff, several runners with connections to the mid-Atlantic also made their presence felt.

Though there were no mid-Atlantic runners here, Oscar Performance lived up to his name with a flashy score in 1:33.28 for a flat mile.  Lancaster Bomber was second, and favored Good Samaritan settled for third.

“I’d seen Jose take a look under his shoulder there about the three and a half, and I thought, he’s got horse,” said Lynch in the post-race press conference.  “When he joined [early leader Wellabled] and it started to edge away from him around the turn, and he sort of stole a few lengths at the bottom of the lane there. I thought, well, looked behind, and they were throwing leather at the rest of them. And I thought they’ve got the work cut out to catch him from here. And Jose gave him just a textbook, beautiful ride and got it done. Just absolutely thrilled as I am for my first Breeders’ Cup. I’m thrilled to have done it with Jose.”

Tamarkuz rallied from seventh to win going away in the Dirt Mile under jockey Mike Smith after breaking slowly.  Trained by Kiaran McLaughlin for Shadwell Stable, Tamarkuz was wide for much of the trip and didn’t put his head in front until the sixteenth pole but disposed of leader Gun Runner, who finished second, to win by three lengths.

The two horses with regional connections finished fourth and fifth.  Favored Dortmund, owned by Virginian Kaleem Shah, pressed the early pace of Runhappy, made the lead with three furlongs to go but was hooked by Gun Runner nearing the quarter pole and emptied out late to be fourth, beaten 4 1/4 lengths.

That was a better outcome, however, than that achieved by Pennsylvania-bred Tom’s Ready.  The sophomore More Than Ready colt, bred by Blackstone Farm, ranked fourth on the Top Midlantic-bred Poll, was five wide most of the way and never really involved in the race, ultimately settling for fifth, beaten by eight lengths.

Her second? Not so much.  In yesterday’s Juvenile Fillies Turf, Happy Mesa was ninth after a quarter mile and never got much closer, ultimately finishing 12th, beaten by nine lengths.

The win went to Chad Brown trainee New Money Honey, who closed determinedly along the outside to win by a half-length over longshot Coasted, with Cavale Doree in third.  La Coronel, the tepid 4-1 favorite, settled for sixth.

Happy Mesa began her career at Laurel Park in the barn of Hamilton Smith, where she won a maiden claiming race at first asking and then won impressively in the Selima Stakes on the lawn.  The ownership group including Jerry Romans sold controlling interest in the filly thereafter, and her new connections — Great Point Stables LLC and Highclere America, as well as Zoom and Fish Stable Inc., which remained in the horse as minority partner — transferred her to the Motion barn prior to the Surfer Girl.

You can’t ask for a better horse race than yesterday’s Breeders’ Cup Distaff.  In one corner, undefeated Songbird; in the other, three-time Eclipse Award and two-time Breeders’ Cup winner Beholder.

Those two hooked up in the lane for an epic stretch battle in which first one, then the other, seemed to have the upper hand.  When the dust had cleared, Beholder got her nose down on the wire to win by the narrowest of margins.  It was another 1 1/4 lengths back to Forever Unbridled, who ran a huge race to be third.

Beholder entered the race off three consecutive runner-up efforts, two of them behind Stellar Wind, who finished fourth in here.

“Even in Beholder’s previous three defeats, it was almost like she knew she was beaten midway through stretch and looked after herself,” said jockey Gary Stevens, who rode the winner.  “Today she didn’t look after anything. She laid her heart out there on the racetrack and gave me absolutely everything that was running through her veins, and it was fun to be a part of.  I had some good feelings in racing, but this is tops right here.”

It was a rough outing for Virginia-bred Stellar Wind, number one in the Top Midlantic-bred Poll.  She went off as the 5-2 second choice in the field of eight — Songbird was the even-money favorite — but was fidgety pre-race and broke in air when the gates opened to be away last.  That took her out of her normal stalk-and-pounce game, and the best she could do from there was rally to fourth, nearly four lengths behind the top pair.  Stellar Wind, a four-year-old Curlin filly, was bred by  Keswick Stables & Stonestreet Thoroughbred Holdings LLC.

Another multiple Grade 1 winner, I’m a Chatterbox, who enjoyed a productive summer for trainer Larry Jones at Delaware Park, taking the Grade 1 Delaware Handicap and the Obeah Stakes, pressed the early pace of Songbird but could not go with the top runners in the lane, settling for fifth.