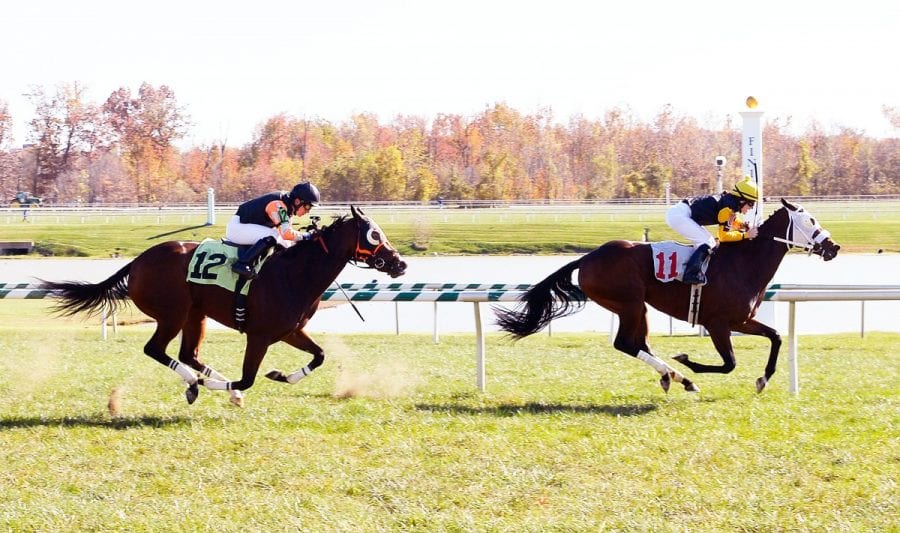 Apprentice jockey Anna Carrow picked up her first career victory in her 11th mount with a front-running 1 ¼-length triumph aboard First to Fire in Friday’s third race at Laurel Park.

Francis D. Stanley’s First to Fire, a 3-year-old Friesan Fire filly, was making her 11th lifetime start and second for trainer Anthony Aguirre. Breaking from the outside, Carrow guided First to Fire to the lead through a quarter-mile in 22.91 seconds and a half in 45.52, opening up while being chased by Tiz Heaven.

“I was pretty confident. I still felt like I had a ton of horse and she was out pretty clear and I just felt like she was going to take me there,” Carrow said. “I feel fantastic and I’m so grateful that Tony Aguirre gave me the shot and took the leap of faith with me. I really, really appreciate it.”

As an amateur rider, Carrow won two of three races in 2015. She has worked on farms in Pennsylvania and Maryland and galloping horses for about seven years. Her professional debut came Sept. 16 aboard Wayne Potts-trained Red Sole Diva.

Two races before Carrow, Shaffer picked up her second career victory in Laurel’s Friday opener atop Corby Caiazzo-trained Alex’s Way ($9). The 4-year-old gelding won by two lengths in 1:41.54 for a mile on the main track in the $18,000 maiden event for 3-year-olds and up.

“She saw her own spots there and I just went along with her and when we got clear we had a couple spots that broke open for her and she went right through. She was really brave,” Shaffer said of Strayana. “It feels good. I took my time to be prepared for the moment and it feels really good to see everything come together.”