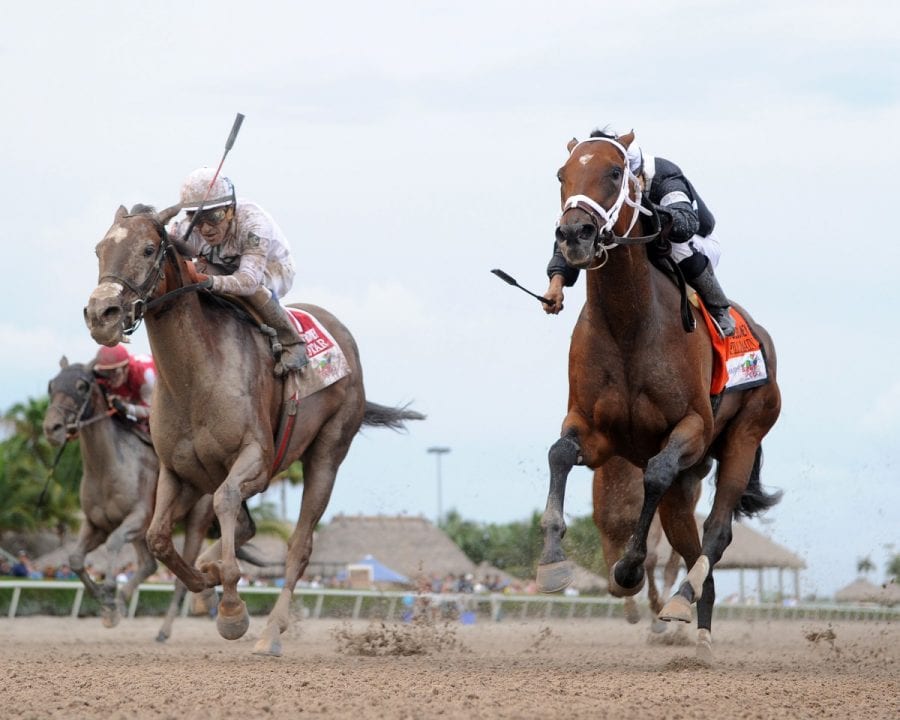 “One of our partners put it perfectly,” said Seajay managing partner Don Giffen of Louisville, referring to Mike Kregor, “He’s a golfer. He said, ‘Hey, if you win the U.S. Amateur, you have a tee time in the Masters. You don’t turn it down. No amateur has won the Masters; your chances of winning are not very good. But you’re not going to turn down the chance the play. You’ve earned the right to play.’ And we kind of feel like we’ve earned the right to play.”

That’s because Spelling Again won Gulfstream Park’s Grade 2 Princess Rooney, a July 2 Breeders’ Cup “Win and You’re In” race where the winner got her entry fees paid and a $10,000 travel stipend.

Spelling Again, by Awesome Again out of the graded stakes-placed Alphabet Soup mare Spelling, was bred in Pennsylvania by George Strawbridge.  Strawbridge’s Augustin Stable raced the five-year-old mare for her first eight races, including two wins, before she was claimed by trainer Eddie Truman for $40,000 in March 2015 — the first of three straight races in which she was claimed, ultimately landing in Brad Cox’s barn.

Since being claimed for $40,000 at Santa Anita 1 1/2 years ago, Spelling Again has won two other stakes, including Churchill Downs’s 2015 Open Mind and Grade 2 Chilukki. The 5-year-old mare has not been at her best since the Princess Rooney, with a seventh, fifth and sixth in three starts. But she’d lost four races heading into the Princess Rooney.

“Every horse owner has an excuse,” said Giffen, a 63-year-old Louisville banker. “We can look at her last few races and come up with an excuse. She’s beautiful, she’s working great, strong. It’s a little bit like full circle for us. Last May, we got her out of Santa Anita. We’re hoping for a repeat of her gutty performance in Florida, and if she does that, I think we could have a respectable showing.

“She’s had some tough races. She’s been beat up a few times around the course, out of the gate, in the turns. … I’m not making — I guess I am making owner excuses — and say, well, who knows? There’s not a horse in there that can run an average race and win. They all have run good races. I think if we run our best race and the more-accomplished horses don’t, we can beat them. That’s why they put them in the gate. I know we’re going to be a long shot. But we went into this business looking for an experience, not money. So this is the ultimate experience.”

Seajay, which also includes Dennis Lynch of Lexington and Giffen’s son Matthew, was formed with the acquisition of Spelling Again. However, the partnership’s roots trace back 45 years ago to when the principals were students at the University of Kentucky and working as ushers at Keeneland. Their fantasy was to someday have a horse that could race at Keeneland.

“The thrill of owning a racehorse that comes along the finish line first is indescribable and probably cannot be duplicated in anything else,” Giffen said. “It’s like owning your own mini-sports franchise. This has been as fun a ride as you can imagine.”

Jennie Rees is a racing communications specialist from Louisville. Her Breeders’ Cup coverage, which concentrates on the Kentucky horses, is provided free to media as a service by Kentucky Downs, Ellis Park, the Kentucky HBPA and JockeyTalk360.com.