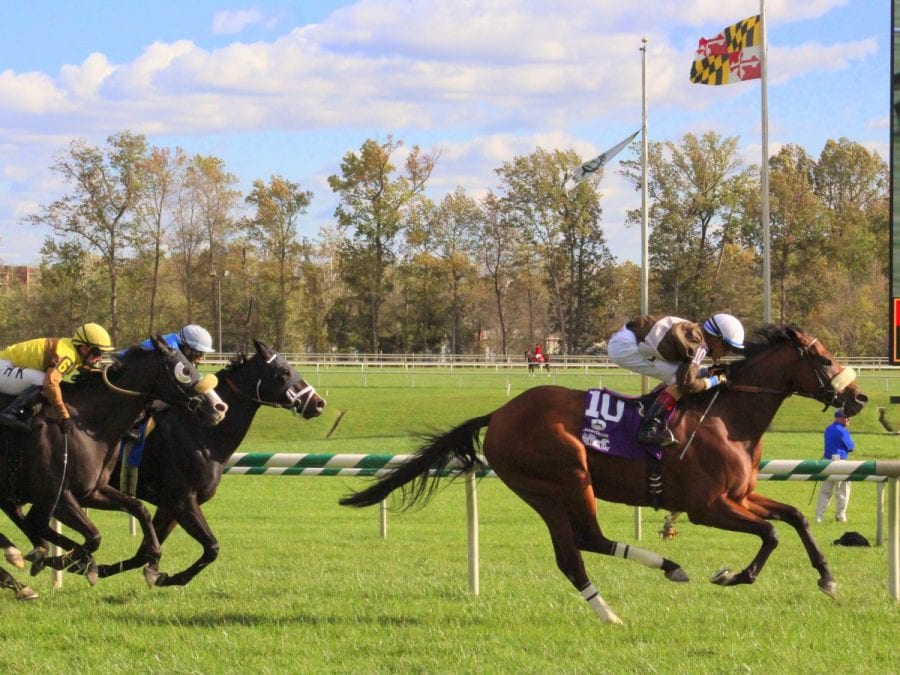 Hillwood Stable LLC’s Phlash Phelps overcame a wide trip from his outside post position to defend his title in the $125,000 Maryland Million Turf, prevailing by 1 ¼ lengths while narrowly missing a course record in the mile turf stakes for Maryland-sired horses.

Trained by Rodney Jenkins, the 3-5 favorite ran a mile over a firm Dahlia Turf Course in 1:34.57, not far off Tune of the Spirit’s 2005 record of 1:34.26. The Maryland-bred 5-year-old gelding did surpass his stakes record of 1:35.35, set while winning the 2015 Maryland Million Turf by three-quarters of a length. Victor Carrasco was aboard the son of Great Notion in both Maryland Million scores.

Phlash Phelps was floated six-wide around the first turn after breaking from the No. 10 post and raced three wide along the backstretch while stalking a solid pace set by Spartianos, who set fractions of 24.12 (seconds), 46.94 and 1:10.85 for the first six furlongs. Carrasco advanced aboard his mount on the far turn to enter contention heading into the stretch, before asking the favorite for his run. Phlash Phelps responded to draw off to comfortable triumph.

“I always feel pressure when I get the call to ride him and I do not know why. He’s such a great horse to ride and always gives his best. Today was just like that,” Carrasco said. “I love riding for the owners and Rodney Jenkins. They are like family. He is just so good.”

Spartianos re-rallied to finish second under Luis Garcia, a head in front of third-place finisher Grandiflora and jockey Horacio Karamanos, who held a narrow lead in mid-stretch.

Phlash Phelps earned $68,750 for his fifth victory in nine starts on turf and his sixth overall victory. After completing his 2015 season with four straight victories, including the campaign-ending triumph in the Maryland Million Turf, Phlash Phelps notched his first stakes victory in five starts in 2016 Saturday.

“We had some bad luck in our last two races,” said Jenkins.  “But you can’t dwell on that, because this horse always comes into his race ready. Mrs. (Ellen) Charles has always let me take my time with her horses. This race was our target all year long, and now I will give the horse a nice rest. This horse really runs well fresh, so we are looking forward to next year.”