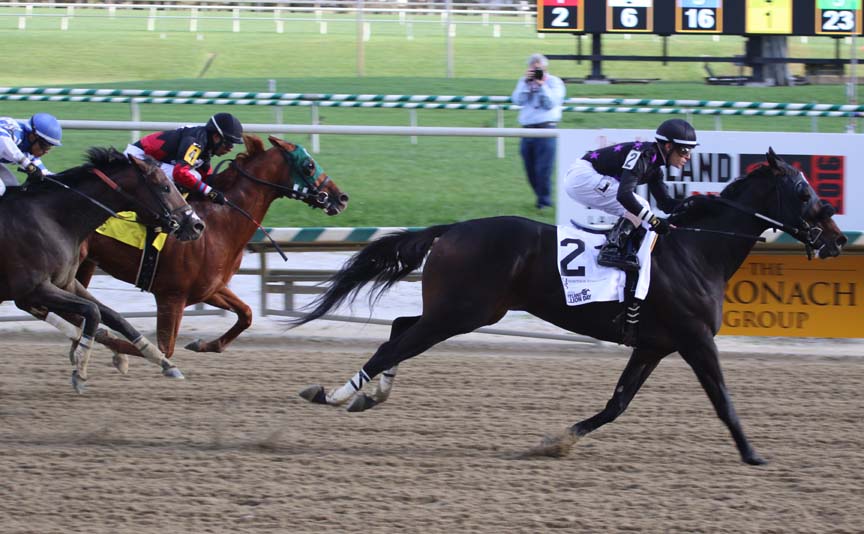 Even with the vocal support of his loyal fans that welcomed him to the Laurel Park paddock and followed him to the track, popular 26-time winner Ben’s Cat couldn’t deliver a fourth Maryland Million victory in Saturday’s $100,000 Sprint.

Instead it was T D C B E Stable’s Nicaradalic Rocks, making his stakes debut, who overcame some early trouble to wrest the lead from pacesetting favorite Morning Fire in mid-stretch and go on to a one-length victory in the six-furlong dash for Maryland-sired horses 3 and older.

Bred, owned and trained by Hall of Fame horseman King Leatherbury, 10-year-old gelding Ben’s Cat finished last in a field of six, beaten 12 ¼ lengths in his bid to become the winningest horse in the 31-year history of the Jim McKay Maryland Million Day program.

“What can I say? He didn’t run a lick. He broke good and [jockey Trevor McCarthy] wanted to get him back a little bit and relaxed and then make a big run, which he couldn’t do,” Leatherbury said. “He was training well and doing good, but he didn’t run a lick. It was a clunker. He just didn’t have it. It’s a shame. I don’t know [what’s next]. We’ll take a look and evaluate it later. It’s disappointing.”

McCarthy took over regular riding duties this year aboard Ben’s Cat, guiding him to two victories to open the year including a fourth straight win in the Jim McKay Turf Sprint in May. They finished third in three subsequent stakes and was fifth in the storied Laurel Dash Sept. 10 that preceded the Maryland Million.

They broke running from the Post 1 in a field of six before settling next-to-last as even-money favorite Morning Fire, a two-time stakes winner making his first start since mid-April, led through a quarter-mile in 22.69 seconds and a half in 45.95. McCarthy saved ground inside and stared at a huge opening along the rail turning for home but failed to mount a challenge.

“He broke well and settled nice for me today. Going into the far turn I was in great spot and just when I needed him the most he wasn’t there for me today,” McCarthy said. “He’s been breaking sharp and the theory was, he broke really sharp last time and he was a bit rank. Today I wanted to ride him more like I did in the Jim McKay and let him settle back there, let the speed go and get him to turn off and relax, save all the ground we can and when it’s time to get going, get going. When it was time to get going, he wasn’t there for me.”

Nicaradelic Rocks bobbled a few strides from the gate but recovered and angled out to move into a stalking spot behind Morning Fire before launching his bid around the far turn. With steady right-handed urging from jockey Angel Serpa, the 3-year-old Rock Slide gelding took command inside the three-sixteenths pole and continued on to the wire, finishing in 1:09.89 over a fast main track.

Morning Fire held off Easy River by a head for second. They were followed by 2014 Sprint winner D C Dancer and All Fired Up, a half-length ahead of Ben’s Cat.

“The race shaped up exactly as we thought it would. We thought that we would have to beat [Morning Fire], so we stayed in position and were able to run our race,” Serpa said. “I knew that I had a lot of horse and that he would give me everything when I asked him. It went exactly as we planned.”

Sent off at 6-1, Nicaradalic Rocks ($15) won his second straight race and third in 18 lifetime starts. He owns two wins, a second and a third since joining the barn of trainer Kieron Magee, his losses coming by a nose and a neck.

“The first couple starts I had him he got in trouble early from the rail. Then we put on the blinkers and that has made all the difference in the world,” Magee said. “He got more focused and he last two races really helped to show his abilities. He got closer to the action last time in the mud. We were hoping for mud, but he proved he’s good on a track like today.”