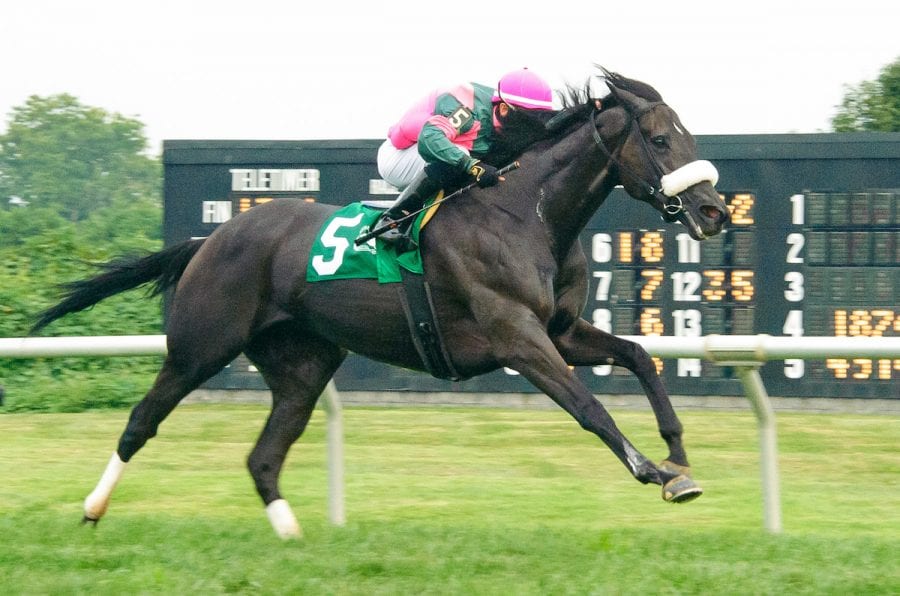 Delaware Park today ran a pair of stakes restricted to horses that had run at the track during the 2016 meeting.

Despite the seemingly modest conditions, one of those races — the $75,000 George Rosenberger Memorial Stakes for fillies and mares three and up going 1 1/16 miles on the turf — produced a track record.  And the other, the $75,000 DTHA Governors Day, nearly did the same.

With Ricardo Chiappe aboard, the 5-year-old daughter of Raffie’s Majesty set the track record for a mile and a sixteenth, on the turf by covering the distance in 1:39.95. The previous record was held by Whale, who ran the distance in 1:40.51 in 2005.

Old Harbor held a length lead through a half-mile in 47.22 seconds, maintained that through three-quarters in 1:10.57, and then drew away while covering the final five-sixteenths in 29.38 seconds.

Old Harbor won by 4 ½-lengths and returned $8.60 as the second-choice in the field of eight. Tela, with Brian Pedroza, finished second. It was another length further back to Divine Dawn, with Gabriel Saez, in third. The 3-to-2 favorite, Catcha Rising Star with Erick Rodriguez, finished fifth.

Old Harbor, a New York-bred trained by Russell Cash, raised her career record to seven wins from 23 starts with earnings of $481,335.

One race later, defending champ Ain’t Got Time missed Delaware’s track record for one mile 70 yards by less than 2/5 seconds while posting a 7 1/2 length win.

With Scott Spieth aboard, the 5-year-old son of Roman Ruler won by a 7 1/2-lengths and returned $8.40 as the fourth choice in the field of seven. The Kentucky-bred trained by former Delaware Park leading trainer Tim Ritchey, won this race last year by 3-lengths.

Fabuulous Time, with Ricardo Chiapie finished second. It was another 1 1/4-lengths further back to Albano, with Gabriel Saez, in third.  Favored Warrioroftheroses chased the early pace from second but faded to finish seventh, and last.