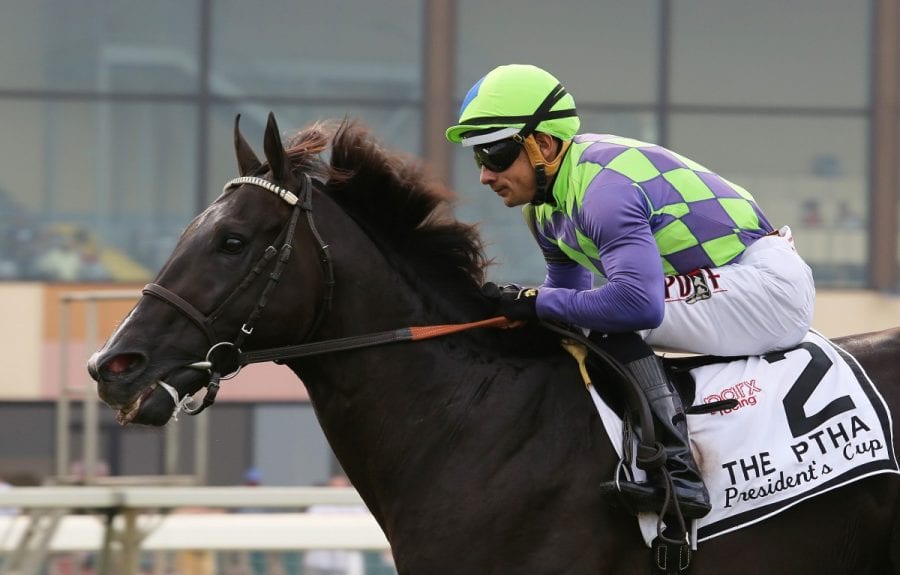 Long Lake Stable & Beacon Hill Thoroughbreds’ Tammy the Torpedo launched a furious stretch rally to run by All in Fun late in the lane to capture the Grade 3, $100,000 Violet Stakes at Monmouth Park on Saturday afternoon.

Trained by Chad Brown, Tammy the Torpedo covered the mile and an eighth over firm turf in 1:49.60 and paid $12, $4 and $2.20 in the field of six fillies and mares. Sweet Acclaim, who originally placed third, was moved to second upon the disqualification of runner-up All in Fun, who impeded odds-on favorite and pacesetter Isabella Sings in the stretch. The exacta came back $55.60 with the runner-up paying $4.60 and $2.60. Isabella Sings returned $2.10 to show. All in Fun was placed fourth.

“My filly broke really sharply, but I knew the three horse [Isabella Sings] has a lot of speed so there was no point in letting her run with her early,” said winning jockey Antonio Gallardo. “I just put her in behind horses and tried to get her to relax and save up for the last three-eighths. When I asked her to run, she took off.”

At Parx Racing, scratches left just five runners in the $200,000 PTHA President’s Cup going 1 1/8 miles on the turf.  And that suited War Dancer just fine.  The six-year-old son of War Front, last early, rallied stoutly in the lane to wear down Uncle Dave and win by three parts of a length.  Running time for the nine furlongs on firm turf was 1:52.31.

War Dancer, the winner of the apparently final running of the Virginia Derby at Colonial Downs back in 2013, now has won six of 29 career starts, and the winner’s share made him a millionaire with $1,066,925 in career earnings.  He is trained by Bill Mott for Diamond M Stable…