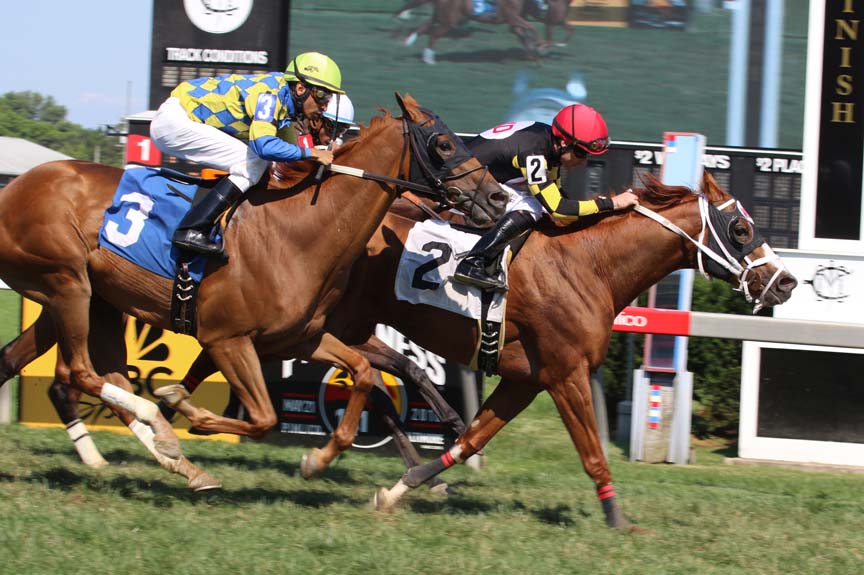 Eyeplayeveryday (in between). Photo by Laurie Asseo.

M & D Stable homebred stakes winner Eyeplayeveryday, third as the favorite in an off-the-turf allowance last time out, looks to bounce back in the $100,000 Laurel Turf Cup for 3-year-olds and up at 1 ½ miles on the All Along Turf Course.

Owner-breeder Mike Horning believes the distance will be a plus for Eyeplayeveryday, a 5-year-old son of Jazil out of the Touch Gold mare Gimme the Gold. Both Jazil (2006) and Touch Gold (1997) won the 1 ½-mile Belmont Stakes (G1), the third leg of racing’s Triple Crown.

“When you watch his races and you watch him gallop out he never lets horses get by him. The outriders have to pull him up because he won’t stop running by himself,” Horning said. “The jockeys have a hard time pulling him up, so I have felt that the longer he goes the better he’s going to be. I’m looking for him to run a big race regardless of the competition. I just think this is right up his alley, being by a Belmont Stakes winner out of a dam by a Belmont Stakes winner. He has so much energy and he just keeps rolling. He can gallop all day long and not get tired.”

Trained by Horning’s father-in-law, Bill Komlo, Eyeplayeveryday was a neck winner of the 1 1/8-mile Find Stakes June 25 at Pimlico before finishing a distant third to Noteworthy Peach in a one-mile optional claiming allowance rained off the grass July 30. He is winless in nine starts at Laurel but was second by a half-length to multiple stakes winner Phlash Phelps in the 2015 Find in his only previous attempt over its world-class turf course.

“I’ve been wanting to run this horse this distance and, other than New York, you don’t really get races like this,” Horning said. “We just said, ‘It’s 40 days between his last race and this one, let’s just shoot for the Turf Cup.’ It’s right here at home, he ran well over that turf course and it’s a mile and a half, so we’re giving it a shot.”

Eyeplayeveryday will break from post 8 of nine under Hall of Fame jockey Edgar Prado. All horses will carry 118 pounds.