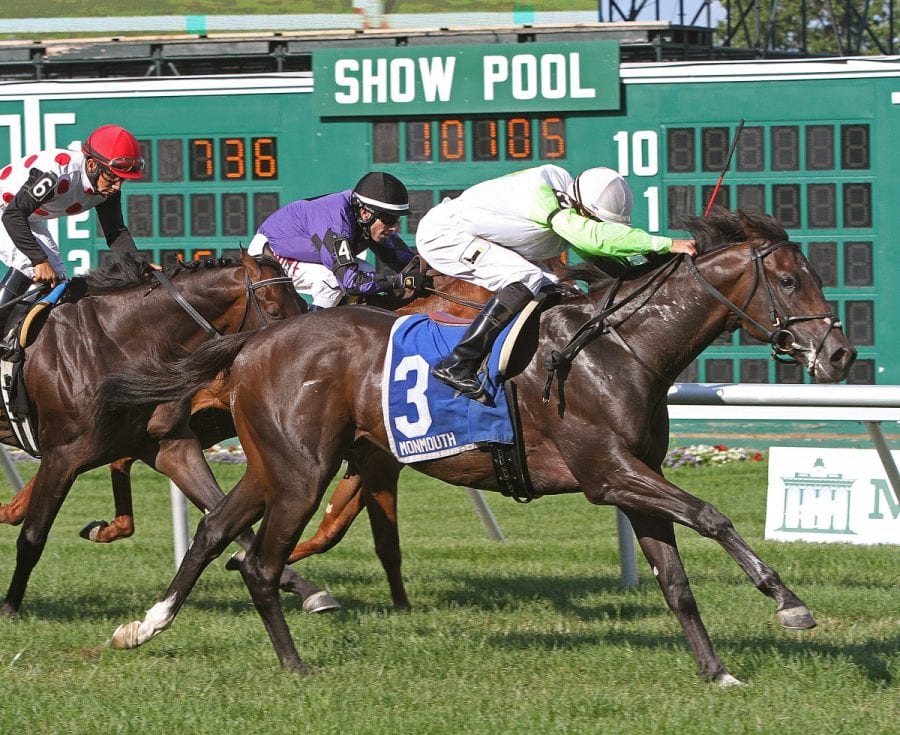 The Elkstone Group LLC’s Ardmore Bay pushed past Follow the Rainbow and Bay Numbers late in the lane to capture the $60,000 Tyro Stakes by a length on Sunday at Monmouth Park before a crowd 11,308.

“They were going really fast when we broke,” said winning rider Victor Lebron.  “I just put my horse into cruise control and let him be two or three off of them. I saw how he ran at Belmont and it was an impressive race. Around the turn, I had him rolling. We were three or four wide, but I just didn’t want to stop him because of how fast he was coming and I knew I had a lot left.”

A colt by Bluegrass Cat from the Candy Ride mare Collar, Ardmore Bay is now a perfect two-for-two, having broke his maiden against fellow New York breds at Belmont on July 4.  He has earned $72,000 for his connections.

In Saturday’s $60,000 Colleen Stakes for two-year-old fillies, Hat Creek Racing and Head of Plains’ Red Lodge popped out of the gate first and never looked back, posting an impressive 3 ½ length victory.

“She is a very nice filly,” said winning rider Paco Lopez.  “She had a great break and went to the lead.  I hit her one time going around the turn and I knew I had a lot of horse left.”

A daughter of Midshipman from the Aldebaran mare Star Silver, Red Lodge was making her first start since the Group 2 Norfolk Stakes at Royal Ascot on June 16.  She has now won two of her four starts, good for earnings of $81,000.

How good is Bullets Fever?

That’s a question that remains to be answered, but for the moment, “pretty darn good” will suffice.  The three-year-old Fiber Sonde colt posted a front-running, 1 1/2 length score in Saturday’s $50,000 Robert G. Leavitt Stakes for West Virginia-bred sophomores at Charles Town to run his record to a gaudy seven-for-seven with four stakes wins and $192,999 in earnings.

Bred in West Virginia by John McKee, Bullets Fever is a full-brother to the talented multiple stakes winner Hidden Canyon.  He is out of the stakes-placed Indian Charlie mare Ghost Canyon.  He is trained by Jeff Runco for owner David Raim.

On Saturday, Bullets Fever, under Arnaldo Bocachica, popped the latches in front and never looked back.  Running time for the seven furlongs was 1:24.04.  James Casey trainee Castle Bound was second, and it was 4 1/2 more lengths back to another Runco trainee, North Atlantic, in third.

Edge of Reality entered Saturday’s $100,000 Robellino Stakes for Pennsylvania-breds at Penn National with just a single win in his last 14 starts: not an auspicious streak, especially for a horse who’d won six of his first 15 races, including a score in the Grade 3 Smarty Jones at Parx Racing.

But the six-year-old son of Lawyer Ron-Our Nancy Lee, by Touch Gold found the winning touch Saturday, rallying from eighth in a 10-horse field under Jeremy Rose to win by a length over 20-1 longshot Raging Market.  Favored Granny’s Kitten was third.  Running time for 1 1/16 miles over firm turf was 1:42.06.

Edge of Reality is a homebred for The Elkstone Group LLC and is trained by Graham Motion.  He now has eight wins from 30 starts and career earnings of $640,620.