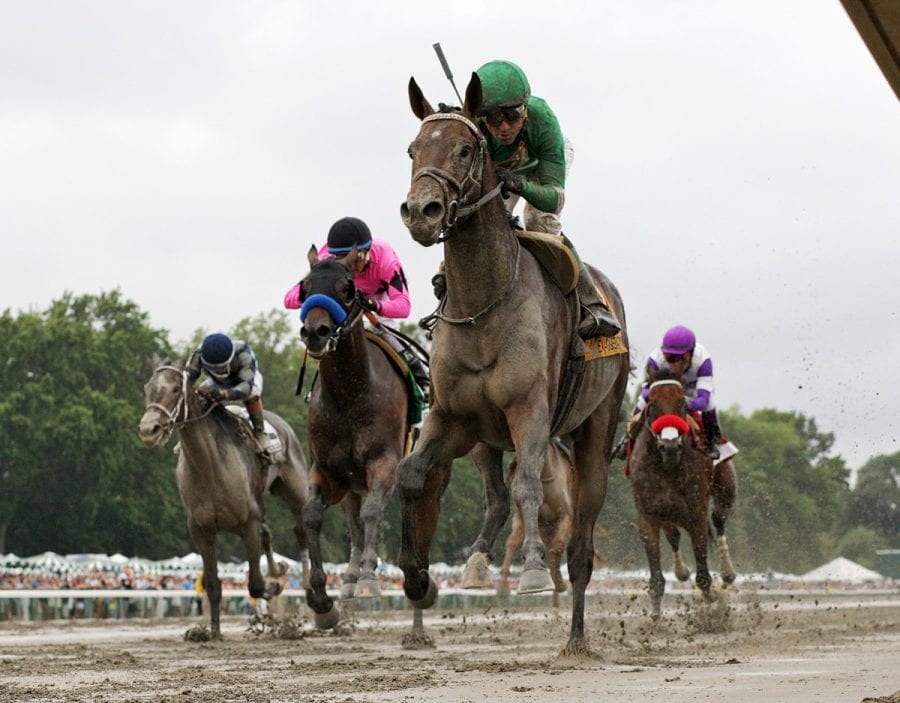 Exaggerator leads them home, with Sunny Ridge on the far outside. By Bill Denver/EQUI-PHOTO.

Both approaches were on display in Sunday’s $1 million, Grade 1 Haskell Invitational at Monmouth Park. And, oddly enough, the race’s final outcome left both sets of connections smiling after the race.

While winner Exaggerator was virtually a last-minute entrant to the race, show horse Sunny Ridge’s path here had been mapped out months in advance.  And while a third place finish likely would have been a disappointment for Exaggerator’s connections, show money looked pretty good to Dennis Drazin, the owner and breeder of Sunny Ridge and an advisor to Darby Development, which operates Monmouth Park for the state’s horsemen’s organization.

Exaggerator, who upended Nyquist’s Triple Crown dreams with a sweeping move in the Grade 1 Preakness over a sloppy, sealed racetrack at Pimlico, caught the same setup and same racetrack today, and the results were similar.

The Keith Desormeaux trainee, ridden by Keith’s brother Kent, rallied from last of the six horses after a half-mile to post a 1 1/2 length victory over ultra-game American Freedom.  New Jersey-bred Sunny Ridge was third, and Nyquist, the even-money favorite, faded to fourth after dueling American Freedom for the early lead.

Yet less than a week ago, Exaggerator was headed to the Jim Dandy at Saratoga.

“Keith decided Tuesday night,” said a pleased Elliot Walden, whose WinStar Farms operation will stand Exaggerator, now a three-time Grade 1 winner, upon his retirement.  “I got a text while I was sleeping.  It was a good decision by Keith.”

Julie Clark, assistant trainer for Desormeaux, has been training the barn star in Saratoga.  She said his two works at Saratoga, including a bullet five furlongs on July 16, were “a little confusing.  They didn’t look good visually, but on paper they seemed fine.”

The inconclusive works didn’t square with the rest of what the team was seeing.

“The horse looked good,” Clark said.  “His condition is great, he’s put on weight.  He’s feeling good in the barn. All those other indicators were saying go.”

But go where?  That was the question they faced.

It probably didn’t hurt that the race projected to — and did — have plenty of speed in it.  American Freedom and Nyquist dueled heads apart through a half-mile in 46.62 seconds and three quarters in 1:11 flat, with longshot Awesome Slew not far behind.

“As the race was unfolding, I thought, ‘Perfect,'” said Keith Desormeaux on TVG.  “It was not as much Exaggerator laying off the pace, but the way the race was setting up in front of him.”

Kent Desormeaux steered Exaggerator to the rear and the rail as soon as the gates opened, allowing him to save ground around the first turn.  He began to make progress on the backstretch, moving outside of horses for clear running.  He circled the field on the turn, and went on past the tiring American Freedom; the two runners came together in the stretch, Exaggerator veering in and American Freedom drifting out, and Rafael Bejarano, aboard the runner-up, objected to the stewards, who quickly dismissed the objection.

Running from the same place as Exaggerator — the rear of the pack — was New Jersey-bred Sunny Ridge, at 31.80-1 the second longest shot on the board.

While Exaggerator’s journey to the Haskell started only on Tuesday, Sunny Ridge’s began somewhat earlier: on October 3, 2015, the day of the Grade 1 Champagne Stakes at Belmont Park.

“It feels great,” said Drazin, the owner and breeder of the gelded son of Holy Bull, in the winner’s circle after the race.  “We’ve been pointing to this race since the Champagne, where he ran second. This is where I wanted to be.”

There are many reasons for that.

“It means a lot,” Drazin said, ticking off the reasons.  “This is a horse that everyone followed because he is a Jersey-bred. He’s also the last crop of Holy Bull. Jimmy Croll, the owner of Holy Bull, had connections to this track, and to me. I was his attorney. It just kind of came together.”

Sunny Ridge, out of the Songandaprayer mare Lignum Vitae, came out of a fourth-place finish in the Grade 3 Gotham in early March more tired than expected, and Drazin and trainer Jason Servis made the decision to pass on expected big spots, among them the Grade 1 Wood Memorial and Preakness Stakes.

But not the Kentucky Derby, because, Drazin said, the Haskell was always the main goal.  But the way things worked out, Sunny Ridge wasn’t quite ready for the preps they’d have hoped for — the Pegasus or the Long Branch among them — and ran out of time to get a prep in prior to this race.

Sunny Ridge, fifth early and sixth after three-quarters of a mile, followed Exaggerator around the turn, angled out in mid-stretch and nabbed Nyquist late for the show spot, 2 1/2 lengths behind the winner.

“We didn’t have a prep for the race, but the main thing that Jason and I talked about was seeing him finish at the end, and when he came for home, he really dug in,” said jockey Nik Juarez, aboard Sunny Ridge and enjoying his first Haskell mount.

“Jason did a great job training him into the race, and he did run his eyeballs out,” said Drazin.  “He ran third to the best horses in the country.”

And so two horses that took wildly varying routes to Oceanport took two of the top three spots in the final running order.  And it sounds like they will likely take different routes leaving the seaside town.

Drazin said that he and Servis would likely look for a softer spot for Sunny Ridge’s next start.

Desormeaux took the opposite tack.

“I will absolutely consider the Travers at Saratoga for him next,” the conditioner said.