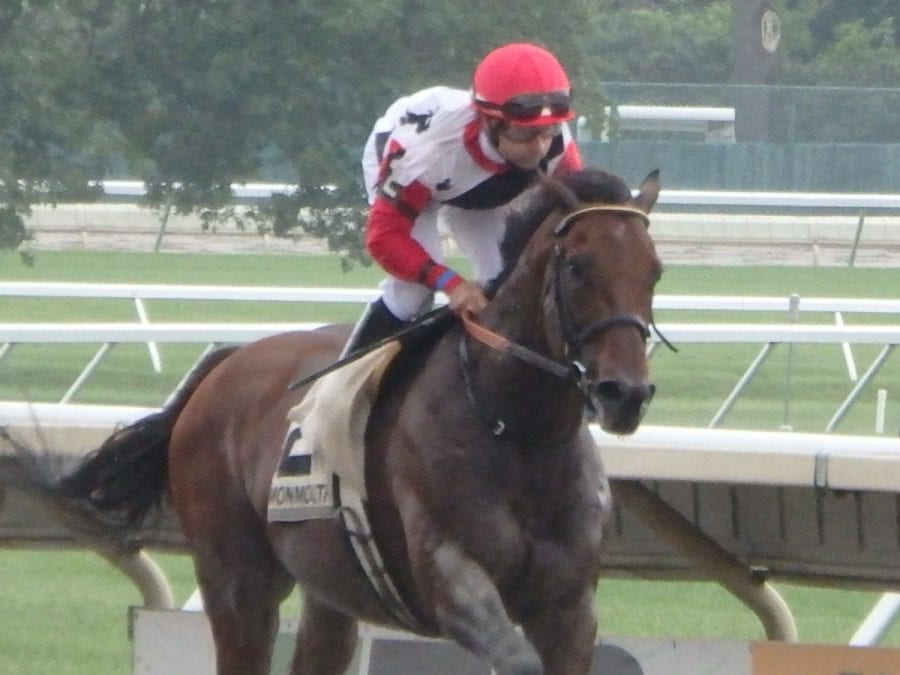 Joe Bravo and Bradester were the good kind of lonely at the end of the Monmouth Cup. Photo by The Racing Biz.

Good enough to think about the season’s biggest races.

That was the lesson driven home in this afternoon’s $200,000, Grade 2 Monmouth Cup, contested over a sloppy, sealed main track on the Haskell Invitational undercard.  Facing a field of five rivals, Bradester left no doubt as to who was best, romping to a 2 1/2 length victory that could have been more.

Bradester, under jockey Joe Bravo, broke alertly to the lead in the first strides and turned the race into a victory procession through the lane.  He led by a half-dozen lengths at the stretch call of the 1 1/16 mile test before Bravo wrapped up on him late.  The winning time was 1:42.21.

“Honestly, coming down here I thought this was my best spot today,” said the jock, who also won two other graded events on the afternoon.  “I had the most pressure on me because I thought I could not get beat. After seeing how the track is playing today and how Bradester performed, I think he’s twice as good as I thought he was before the race.”

He certainly was best in here.

Mr. Jordan, trained by Eddie Plesa, was beginning to tire, and Bradester was still cruising.  The only runner making a meaningful move from the rear, meanwhile, was the aptly named Scuba.  Scuba ultimately took second and, while never a threat to win, was five lengths clear of Mr. Jordan in third.

“He had a lot to overcome today between the surface and not being able to take a breather,” said Bravo. “They went at him hard and he had to prove he was the best horse today.”

Bradester now has a gaudy record of 4-3-0 from seven Monmouth Park starts.  He also is a Grade 1 winner, having taken the Stephen Foster at Churchill Downs in his prior start.

“He loves Monmouth,” said winning trainer Eddie Kenneally, who trains the son of Lion Heart for Joseph W. Sutton.  “We know he loves a dry Monmouth, but we weren’t sure if he would love a wet Monmouth. Evidently he handled it quite well.”

Indeed.  As for the future, there are bigger fish lurking in Bradester’s waters.

“The Woodward [at Saratoga September 3] would be a possibility,” Kenneally said. “He trains up at Saratoga and he has won a Grade 1. Obviously, the Breeders’ Cup is the year-end goal.”

Last year, Bradester, now three for three on the season, ran ninth in the Breeders’ Cup Dirt Mile.  Kenneally said that his star might run there again or, if all goes well, could take a look at the Classic.

NOTES: In the day’s other dirt undercard event, Paco Lopez and Genre won the Grade 3 Molly Pitcher by a neck over Eskenformoney in 1:43.20.  Genre is trained by Todd Pletcher for Cheyenne Stables LLC.