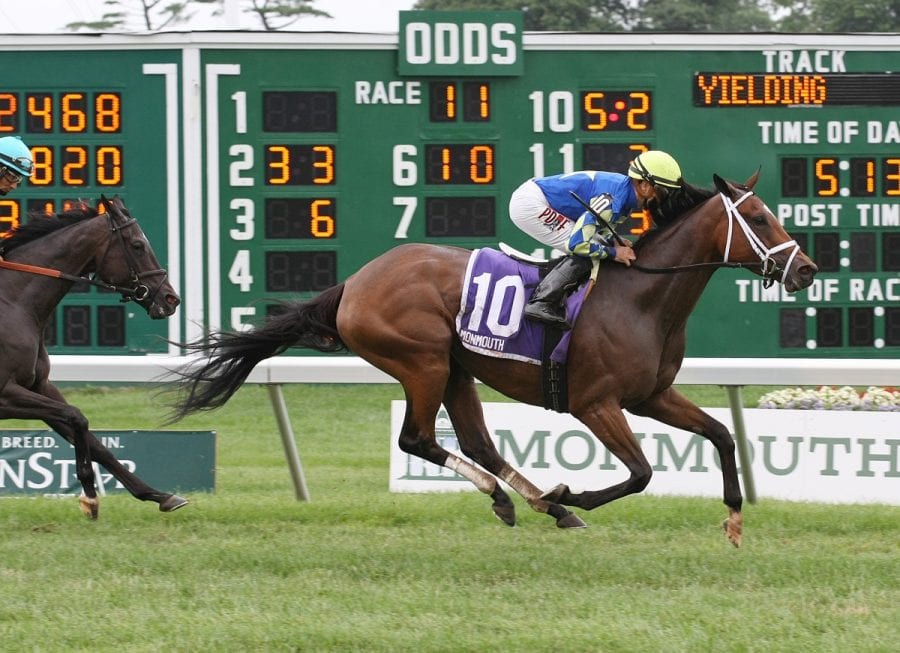 
On a day of chalk at Monmouth Park, favorites prevailed in a pair of Grade 3 turf events  on the Haskell Invitational undercard.

But neither race was an easy one for the winner, and neither was without drama.

In the Grade 3, $150,000 Oceanport Stakes, for three-year-olds and up, Blacktype wore down Kharafa late to post a neck victory, while in the Grade 3, $100,000 Matchmaker for fillies and mares three and up, Itsonlyactingdad surged late to win by 1 1/4 lengths over Tammy the Torpedo.

The former paid $7.60 to win, while the latter paid $7.40.  Jockey Joe Bravo, who won three graded events on the card, ws aboard for both of these.

In the 71st running of the Grade 3, $150,000 Oceanport, the French-bred and favored Blacktype earned his first American black type with a game, come-from-behind performance to give jockey Joe Bravo his second consecutive stakes victory and third win of the day.

The 5-year-old Blacktype, who is trained by Christophe Clement, raced near the back of the eight-horse field as 19-1 longshot Nonna’s Boy set pedestrian fractions of 24.72 and 49.64 over the yielding turf. Coming four-wide off the far turn, Blacktype steadily advanced and dug in courageously to run down Kharafa just before the wire and prevail by a neck in 1:45.64 for the 1 1/16th miles. War Dancer, who also came from far back, was just another neck back.

“We thought we had the best horse in the race and that turned out to be true. The turf was in great shape even with all the rain and I was just happy to be aboard the best horse. He really dug in the final eighth (of a mile) and was able to push by late,” said Joe Bravo.

Blacktype, who handled the jump in class from a win in an $80,000 optional claiming race in New York last out for owner Jump Sucker Stable, earned $90,000 with the victory and improved his bankroll to $351,665. He paid $7.60, $4.20 and $3 and now has six wins in 19 starts. Captain Dixie, Almasty, Infinite Wisdom, Nonna’s Boy, and Winning Cause completed the order of finish.

In the Grade 3, $100,000 WinStar Matchmaker Stakes, Joe Bravo won his third stakes race on the undercard with a confident, come-from-behind ride on a very game Itsonlyactingdad for trainer Todd Pletcher.

“After my day at Saratoga yesterday (winner of the Grade 1 Vanderbilt) being able to come down here with the mounts I had is just living a dream. It’s fun to deal with good horses and with these horses any jock in the jock’s room could have sat on any one of these horses and won the race. It’s just nice that it was me. What makes this filly special is that she did it with so much ease. Every time I pointed her at something she listened perfectly,” said Bravo.

The owners of the 4-year-old daughter of Giant’s Causeway, Starlight Racing, earned the $60,000 purse and the choice of a future match with WinStar stallion Fed Biz, Take Charge Indy or 2012 Haskell Invitational winner Paynter.

Itsonlyactingdad, now a first time stakes winner, came from off the pace and dug in down the lane to cover the 1 1/8 miles over yielding turf in 1:52.27. Tammy the Torpedo was 1 ¼ lengths back and it was another 3 ¾ lengths to Uchenna.

Itsonlyactingdad, who gave Pletcher his second win in the four graded stakes on the undercard, is now a winner of four of her nine career efforts. She returned $7.40, $4.20 and $3.